"Today, summing up my life ... I can do so in three words. My life was typical, tragic & beautiful," Elena Bonner, Oslo Freedom Forum 2009 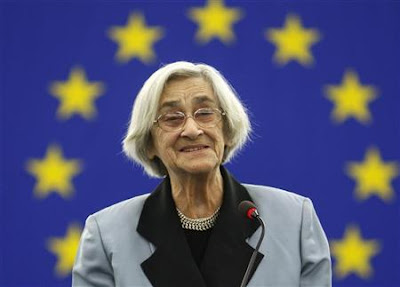 Elena G. Bonner 15 February 1923 – 18 June 2011
Elena G. Bonner, the Soviet dissident and human-rights campaigner died on Saturday at the age of 88 after years of ill health.

Elena Bonner's father was one of Stalin's victims executed in 1937. She described herself as one of "the strange orphans of 1937."

She was also a great friend of Cuban dissidents and a defender of human rights in Cuba. She was a director of the Cuban Committee for Human Rights and had issued declarations denouncing executions in Cuba at a time when much of the world refused to listen. In 1999 when Cuban opposition activist Maritza Lugo was imprisoned at the women's prison Manto Negro and went on a hunger strike, she gained the support of Elena Bonner. In 2000 Elena Bonner sent a letter to the board of the Pro Human Rights Party of Cuba that read:

It gives us cause for joy to address you to congratulate a new anniversary, the twelfth, of the founding within the Island of the Pro Human Rights Party of Cuba.

Truly, the perseverance and decorum of your dissident institution, like all of the Cuban Human Rights Movement, represents a source of inspiration and glory for activism on behalf of the legitimate rights of citizens in the world.

We consider that the arrogance and atrocities of Fidel Castro against all of you and the inability to liquidate these Cuban civil society groups, is one of the worst defeats of the many he has faced in his long trajectory.

So I want to reiterate our sincere admiration and support. Through the friend and board member of our Sakharov Foundation, Ricardo Bofill, I extend this note and I assure you that I will be with you in this struggle until Cuba is free.

At the Oslo Freedom Forum in 2009 Tatiana Yankelevich, Director of the Sakharov Program on Human Rights at Harvard University, introduced remarks by Elena Bonner, her mother and the widow of Nobel Peace Prize recipient Andrei Sakharov.

Cubans have lost a steadfast friend. Elena Bonner was a giant on the human rights scene and the world is now a poorer place with her passing. Requiescat in pace
Posted by John Suarez at 9:42 PM