Women have the power: Cuba's Ladies in White

Laura Pollan, center with cast, leader of Ladies in White, a group of female dissidents, takes part in a march marking the anniversary of a major government crackdown on dissent, in , Thursday, March 18, 2010. The crackdown took place in on March 18, 2003. (AP Photo/Javier Galeano) 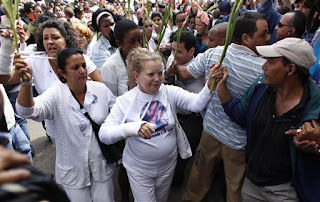 "Change does not roll in on the wheels of inevitability, but comes through continuous struggle. And so we must straighten our backs and work for our freedom. A man can't ride you unless your back is bent." - Martin Luther King Jr. Memphis, , April 3, 1968

“Even the most powerful cannot rule without the cooperation of the ruled.” – Mohandas Gandhi

Media analysis of the latest release of Cuban political prisoners tends to focus on the role of Spanish Foreign Minister Moratinos or Cardinal Jaime Ortega or whether or not the Castro brothers are easing up and if they are willing to open up . That is all well and good but overlooks the most important factor in this latest round of political prisoners being released: the civic resistance and its impact in the wider population and in the regime itself.

On the eve of his assassination Martin Luther King Jr. gave one of the greatest speeches of his life: "I See the Promised Land" in which he seemed to forecast his own death but he also made a number of observations critical for any non-violent resistance movement among them that: “Change does not roll in on the wheels of inevitability, but comes through continuous struggle.”

The example of ’s Ladies in White is an application of the above observation. Their movement was born out of repression. On March 18, 2003 the Castro regime began a crackdown in which 75 activists were rounded up, their homes searched, then summary trials and long prison sentences ranging up to 28 years in prison in what became known as Cuba's Black Spring. Twelve days later on March 30, 2003 the Cuban Ladies in White attended mass at the Santa Rita de Casia Church and began their Sunday walks. There was nothing inevitable about this movement, but without their courage and determination there loved ones would still be imprisoned.

Peter Ackerman and Jack Duvall in their essay “People Power Primed: Civilian Resistance and Democratization” offer a definition of “people power” that encapsulates how the Ladies in White operated:

Protest by itself cannot pry a ruler from office because power does not come from a public show; it comes from applying force. When directed strategically by a civilian-based movement, protest is only one of many nonviolent tactics, including strikes, boycotts, blockades, and hundreds of other acts of economic and social disruption that can dissolve the political or military support beneath a ruler. The power in “people power” is best understood as the yield from detonating these nonviolent weapons.

The Ladies in White and their weekly marches defying the dictatorship’s restrictions on public demonstrations since 2003 was but one of several tactics they used in an effort to obtain their relatives release from prison. For example, in October of 2004, Berta Soler delivered a note to Fidel Castro at the Communist Party headquarters in Revolution Square demanding that her husband, prisoner of conscience Angel Moya, who suffered from a herniated disc be sent to the hospital. She then set up a vigil that turned into a three day sit-in nearby in a park next to Revolution Square along with other women from the movement on a Tuesday. State security broke up the protest at dawn three days later and drove them home. Later that day her husband had been transferred to Carlos Finlay military hospital. The petition backed by a vigil and sit-in had achieved its immediate goal.

Along the way the Ladies in White found solidarity from women, who did not have relatives imprisoned, that joined them in their marches and became known as the Ladies in Support. This development made the dictatorship uneasy because the regime has always used a strategy of isolating the opposition from the general population and this movement was tearing that dividing wall.

On February 23, 2010 prisoner of conscience Orlando Zapata Tamayo died after 83 days on hunger strike protesting the brutal and inhumane conditions in Cuban prisons. During his water only strike prison officials denied him water for more than two weeks and contributed to his death. In the arsenal of nonviolent “weapons” the hunger strike is the military equivalent of a weapon of mass destruction only in reverse.

"You are not killing yourself but you are saying to the person that your behavior is so unacceptable that if you continue it its going to kill me. It is an extreme case of taking on the suffering that is in a situation." ...This is different from a threat because what you are saying to the person is "I am going to exhibit to you mirror back to you the ultimate consequences of what you are doing." ... "This is an act of truth. You are killing us - you are killing our people and I'm going to show you that you are doing it to awaken your conscience."

This is precisely what Orlando Zapata Tamayo was doing and its reverberations are still being felt today in and around the world. However, if it had not been for his mother and Lady in White, Reina Tamayo, battling to see her son and denouncing the abuses by Cuban state security against her and her son the news of his death would have been obscured and covered up by the prison authorities. Following her son’s death she demanded and continues to demand a thorough investigation of his death and an independent autopsy to ascertain the cause of death.


The decision of the Ladies in White to escalate and to demonstrate for 7 days straight on the seventh anniversary of the March 18, 2003 crackdown led the regime to respond by escalating its repression against them. Violent mobs organized by the dictatorship, not for the first time, brutalized them in coordination with Cuban State Security, but despite bruises, and in some cases broken bones, they continued to return each day for more after being dragged away. In the end international and domestic outrage led the regime to search for a face saving alternative.

The question raised, by Gandhi’s observation at the top of the page, is how do enough people withdraw their cooperation with a government that will shrink the government’s legitimacy and raise the costs of enforcing its will? Ackerman and Duvall in their People Power Primed essay offer an answer:

The instrument for bringing this about is a self-organized movement, which political scientist Sidney Tarrow describes as having “the power to trigger sequences of collective action” based on a unified frame for common goals. When nonviolent movements of this kind have drained a ruler’s sources of support, the results have changed history.

In the Cuban case there have been a number of actions that to varying degrees have been able to generate dramatic impacts in Cuba. However, over the past seven years, in the midst of a massive crackdown in which many opposition leaders were imprisoned, the Ladies in White maintained a focus on their specific objectives and the means to achieve them that was courageous, disciplined and led to a series of collective actions from the weekly marches following Mass at Santa Rita Church to sit-ins and interventions all in the service of the freedom of Cuba's political prisoners.

When Laura Pollán responded to the regime’s brutality stating: “They can either kills us, put us in jail or release them. We will never stop marching no matter what happens.” The dictatorship knew what its options were, and because harassment, intimidation, and beatings had not worked; realized that this movement was serious about enduring great suffering. The death of Orlando Zapata Tamayo and his mother’s courageous response despite death threats and violence in February 2010 only underlined the truth of Pollán’s statement.

It also underlined the truth of strategic scholar Thomas Schelling's observation nearly a half-century ago that:

“The tyrant and his subjects are in somewhat symmetrical positions. They can deny him most of what he wants—they can, that is, if they have the disciplined organization to refuse collaboration. And he can deny them just about everything they want—he can deny it by using the force at his command.... It is a bargaining situation in which either side, if adequately disciplined and organized, can deny most of what the other wants, and it remains to see who wins.”

This latest release of political prisoners is a victory for the Ladies in White, Orlando Zapata Tamayo, and Guillermo Fariñas Hernández. Nevertheless the struggle continues for a free Cuba in which the laws that imprisoned these prisoners of conscience are repealed so that systematic human rights violations come to an end. Even if in the near future Cuba's political prisoners are all released and no new one's locked up (which would be wonderful and unprecedented considering the past half century in Cuba) as long as the repressive laws, rapid response brigades, and short term detentions continue within a dictatorship in which Cubans are not able to exercise their human rights without repression the nonviolent civic struggle will continue.