According to a statement published the same day with the above photo over Facebook by the Christian Liberation Movement (MCL), State Security agents of the Cuban economic-military junta kept the home of MCL member, Rosa Rodriguez, surrounded on January 6, 2014. She had wanted to approach Revolution Square with a poster calling for the release of her young and mentally challenged son, Yosvany Melchor, who has unjustly been suffering imprisonment since June 2010.


The Cuban Gestapo has told Yosvany's mother that while she remains a member of the MCL, her child will not be free.

Yosvany was detained in June of 2010 and sentenced in a politicized show trial on November 30, 2010 after his mother refused to become an informant for state security. The martyred dissident, Oswaldo Payá Sardiñas, in a September 23, 2011 response to an Associated Press interview in which he addressed this case:


"There are political prisoners in Cuba; the son of a member of the Christian Liberation Movement (MCL) was sentenced to 12 years in jail for the sole reason of being the son of a MCL member. His name is Yosvany Melchor Rodriguez and he was artificially condemned in Santiago de Cuba on November 30, 2010, after his mother was threatened by state security forces for not wanting to cooperate against us." 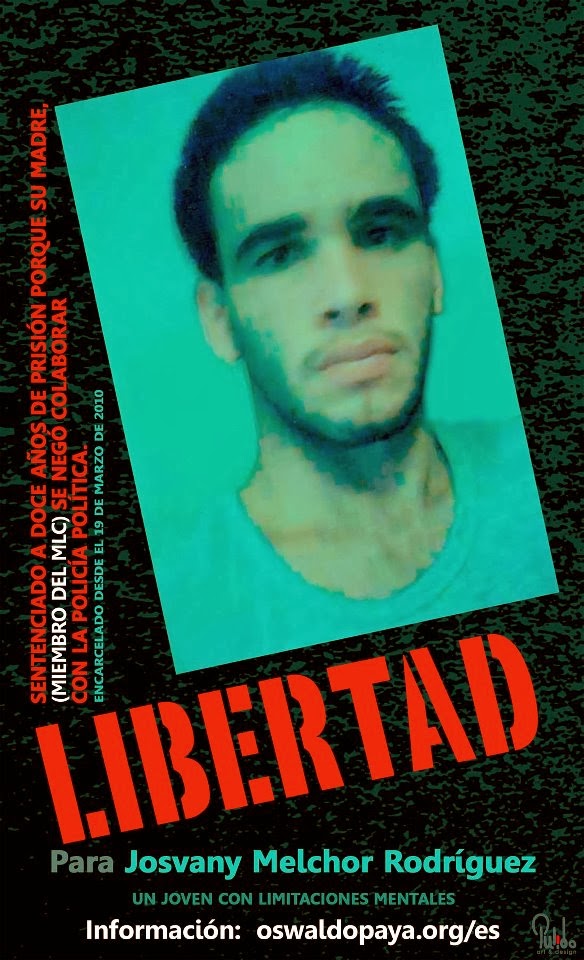 Cuba under the Castro brothers is a communist totalitarian regime in which families are targeted and the loved ones of dissidents are used as hostages.
Posted by John Suarez at 7:16 PM