"Nonviolence is a powerful and just weapon. Indeed, it is a weapon unique in history, which cuts without wounding and ennobles the man who wields it."  Reverend Martin Luther King Jr., Oslo (1964) 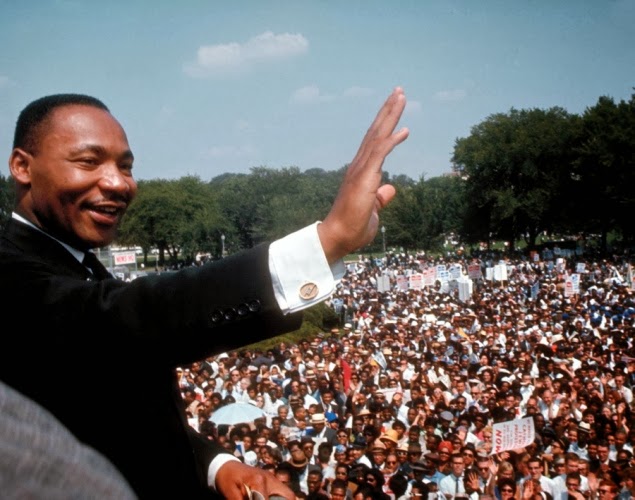 Martin Luther King Jr. might have been turning 85 years old today but as Mohandas Gandhi before him in 1948 and Oswaldo Payá Sardiñas afterwards in 2012, the Reverend Martin Luther King Jr. became a martyred prophet of nonviolence.  He was gunned down in Memphis Tennessee by a sniper on April 4, 1968 at 8:05pm at the age of 39. Both the FBI and the KGB had carried out active measures in an effort to discredit him. Nevertheless, the Baptist minister from Georgia had accomplished more in just 39 years than most people do in a life time twice as long. He led a nonviolent civil rights movement that transformed America. 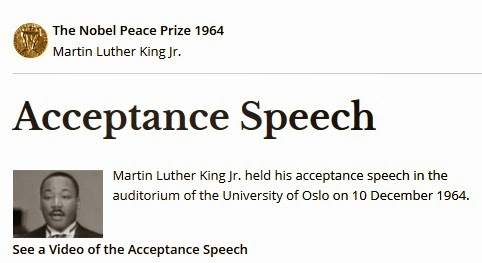 Fifty years ago on December 10, 1964 Martin Luther King Jr. was presented the Nobel Peace Prize in recognition of his accomplishments and gave an acceptance speech both the video and full text are available online. A day later at the University of Oslo a large audience heard the Reverend King's Nobel Lecture. Below are excerpts of this important speech which addressed the evils of racism, poverty and war. Targeting these three evils was not novel but the identification of the source of the problem and the means to combat them were new.

The civil rights leader identified a paradox that still haunts the world today. Materially there is increasing abundance while at the same time both morality and spirituality are decreasing. He outlined the problem in the space of a paragraph:


There is a sort of poverty of the spirit which stands in glaring contrast to our scientific and technological abundance. The richer we have become materially, the poorer we have become morally and spiritually. We have learned to fly the air like birds and swim the sea like fish, but we have not learned the simple art of living together as brothers. Every man lives in two realms, the internal and the external. The internal is that realm of spiritual ends expressed in art, literature, morals, and religion. The external is that complex of devices, techniques, mechanisms, and instrumentalities by means of which we live. Our problem today is that we have allowed the internal to become lost in the external. We have allowed the means by which we live to outdistance the ends for which we live. So much of modern life can be summarized in that arresting dictum of the poet Thoreau1: "Improved means to an unimproved end". This is the serious predicament, the deep and haunting problem confronting modern man. If we are to survive today, our moral and spiritual "lag" must be eliminated. Enlarged material powers spell enlarged peril if there is not proportionate growth of the soul. When the "without" of man's nature subjugates the "within", dark storm clouds begin to form in the world.

Where others would declare a war against the materialists and the immoral, the Reverend Martin Luther King Jr. rejected violence and embraced nonviolence for both pragmatic and principled reasons:


Violence as a way of achieving racial justice is both impractical and immoral. I am not unmindful of the fact that violence often brings about momentary results. Nations have frequently won their independence in battle. But in spite of temporary victories, violence never brings permanent peace. It solves no social problem: it merely creates new and more complicated ones. Violence is impractical because it is a descending spiral ending in destruction for all. It is immoral because it seeks to humiliate the opponent rather than win his understanding: it seeks to annihilate rather than convert. Violence is immoral because it thrives on hatred rather than love. It destroys community and makes brotherhood impossible. It leaves society in monologue rather than dialogue. Violence ends up defeating itself. It creates bitterness in the survivors and brutality in the destroyers. In a real sense nonviolence seeks to redeem the spiritual and moral lag that I spoke of earlier as the chief dilemma of modern man. It seeks to secure moral ends through moral means. Nonviolence is a powerful and just weapon. Indeed, it is a weapon unique in history, which cuts without wounding and ennobles the man who wields it.

The Baptist Minister laid out the challenge issued by nonviolent resisters to their oppressors and recognized the example of Mohandas Gandhi in India as an inspiration:


The nonviolent resisters can summarize their message in the following simple terms: we will take direct action against injustice despite the failure of governmental and other official agencies to act first. We will not obey unjust laws or submit to unjust practices. We will do this peacefully, openly, cheerfully because our aim is to persuade. We adopt the means of nonviolence because our end is a community at peace with itself. We will try to persuade with our words, but if our words fail, we will try to persuade with our acts. We will always be willing to talk and seek fair compromise, but we are ready to suffer when necessary and even risk our lives to become witnesses to truth as we see it. This approach to the problem of racial injustice is not at all without successful precedent. It was used in a magnificent way by Mohandas K. Gandhi to challenge the might of the British Empire and free his people from the political domination and economic exploitation inflicted upon them for centuries. He struggled only with the weapons of truth, soul force, non-injury, and courage.

There is much that freedom activists can learn from Martin Luther King Jr., in his struggles against racism, poverty and war and positive vision of brotherhood, solidarity and peace. Let us take these days to reflect and act.