Pope Francis arrived in Havana, Cuba this afternoon and was received by Raul Castro in a military ceremony at the airport. The speech by His Holiness touched on a number of key elements from Cuban history while praising the normalization of relations between the United States and Cuba:


For some months now, we have witnessed an event which fills us with hope: the process of normalizing relations between two peoples following years of estrangement.  It is a sign of the victory of the culture of encounter and dialogue, “the system of universal growth” over “the forever-dead system of groups and dynasties” (José Martí, loc. cit.).  I urge political leaders to persevere on this path and to develop all its potentialities as a proof of the high service which they are called to carry out on behalf of the peace and well-being of their peoples, of all America, and as an example of reconciliation for the entire world. I place these days under the protection of our Lady of Charity of El Cobre, Blessed Olallo Valdés and Blessed José López Pieteira, and Venerable Félix Varela, the great promoter of love between Cubans and all peoples, so that our bonds of peace, solidarity and mutual respect may ever increase.

During the day the news of mass arrests of democratic opposition activists begin to appear in the social media. Former Amnesty International prisoner of conscience Librado Linares was detained and handcuffed following a provocation by a National Revolutionary Police (PNR) official impeding his attendance at the Papal Mass in Havana. Cuban dissident, Antonio Rodiles, reported this morning that more than 20 Ladies in White had been arrested. 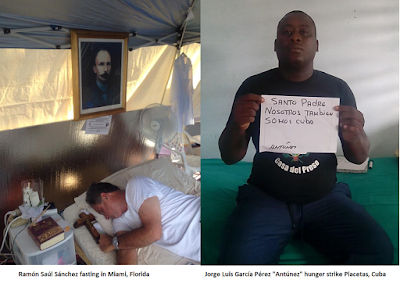 Meanwhile Cubans in the island (Jorge Luis García Pérez "Antúnez") and in the diaspora (Ramon Saul Sanchez) continued to engage in a hunger strike and a fast respectively to call for independent Cuban civil society to be included in the new political context and the voice of the Cuban people to be heard.

Later this evening over social media it was reported that various dissident leaders were invited to meet with Pope Francis in a low profile gathering at the Apostolic Nunciature but were arrested as they left their homes to meet with the Pontiff. Independent journalist Ivan Hernandez Carrillo reported that Angel Moya and Berta Soler, were invited by Apostolic Nuncio in Havana to meet the Pope, leaving home they were arrested. Marta Beatriz Roque was also detained and returned to her home to prevent her meeting with His Holiness.

Yenisleydis Millo and her husband, activist Carlos Olivera, were arrested in Colón, Matanzas at 11:09pm. At 12 minutes to midnight Berta Soler over twitter reported that Rapid Response Brigades besieged the Ladies in White headquarters in Lawton.

These actions by the Castro regime are a rejection "of the culture of encounter and dialogue" praised by Pope Francis during his speech at the welcome ceremony organized by the dictatorship. The international community needs to keep a close eye on events in Cuba that goes beyond the scripted performance of the Castro regime. People of faith need to keep Pope Francis and the people of Cuba in their prayers.