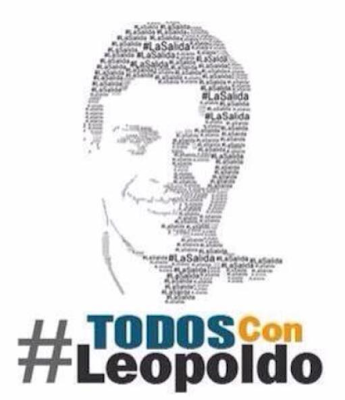 Learned tonight that Leopoldo López Mendoza was sentenced to 13 years and 9 months in prison.The four student protesters charged alongside Lopez had all been released on probation. The show trial has concluded. The injustice continues. The struggle to free Leopoldo Lopez and the many others prisoners of conscience in Venezuela continues. Condemned by this judicial farce is the Maduro regime that now stands revealed as a dictatorship that imprisons its nonviolent, democratic opposition leaders. This also means that the South American country is a satellite of Cuba.

There is no independent judiciary in Venezuela. That was made painfully evident in the case of Judge María Lourdes Afiuni  who freed a man Chavez wanted jailed in 2009 and that the United Nations Human Rights Council had declared arbitrarily detained. Because this judge carried out her duties from the bench she was imprisoned on Chavez's orders and repeatedly raped by prison officials. She is still battling the unfounded charges against her in the courts. The presiding judge in the case of Leopoldo Lopez, Susana Barrientos, knew what the consequences would be if she did not follow her orders.

Today in the streets of Caracas the Maduro regime sent out mobs of thugs that engaged in acts of repudiation against Leopoldo's supporters who had gathered to show their support. The Maduro regime following the Cuban playbook had its agents in plain clothes throw bottles at and attack those who came to show their solidarity. Meanwhile the police "tried" to maintain order in the face of the indignant "pro-Maduro" thugs. The only ones injured today were opposition activists and one of them was killed.  A pregnant activist, who tried to leave when things got violent, was attacked and knocked to the ground by the pro-Maduro mob.


“The charges against Leopoldo López were never adequately substantiated and the prison sentence against him is clearly politically motivated. His only ‘crime’ was being leader of an opposition party in Venezuela.”

This means that the freedom of Venezuela and Leopoldo will not be decided at the ballot box or in Maduro's courts, justice was forced out of those precincts more than six years ago but it will return nonviolently in the streets of Venezuela with committed citizens, combined with international solidarity campaigns for Venezuela's and Leopoldo's freedom.

Leopoldo sent a message through his wife Lillian Tintori calling on Venezuelans to maintain calm with dignity saying that he is at peace because the handcuffs the Maduro regime have placed on him will be removed not by a judge or a court but by the people of Venezuela.