Why we are protesting Raul Castro in New York City

Below is an attempt to provide a succinct answer.

1. After 56 years of totalitarian dictatorship that has wrecked the country Cubans would like a government that respects human rights and consults the Cuban people in fair, multiparty elections with international supervision. Cubans have a right to their rights and the exercise of popular sovereignty.

2. Raul Castro personally ordered the shoot down of two Brothers to the Rescue planes on February 24, 1996 that killed four individuals. He should be tried for crimes against humanity.

3. Across the street from the Cuban Mission to the United Nations the Democracy Movement erected an exhibition of rafts with the photos of the children murdered in the July 13, 1994 tugboat massacre in which 37 Cubans were killed.

4. During the Obama administration's process of normalizing relations that began in 2009 with the first round of loosening sanctions the regime has responded with escalating levels of violence and repression including murdering opposition leaders such as Oswaldo Payá Sardiñas and Harold Cepero on July 22, 2012.

5. Despite the Casto regime's propaganda offensive both healthcare and education are a disaster in today's Cuba.

6. To draw attention to Danilo Maldonado, "El Sexto", who has been on hunger strike since September 8th protesting his arbitrary detention that began on December 25, 2014.

There are many more reasons, the body count of the Castro regime began in 1959 and continues to the present day, as does the cry for justice and freedom. This is why we protest. 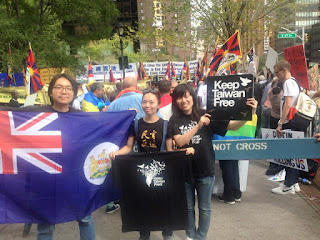 We were not alone, friends of freedom from China, Iran, Tibet, Syria, Equatorial Guinea were protesting the despotic regimes oppressing them whose tyrants were also addressing the United Nations. It was an example in action of the solidarity of the shaken.
Posted by John Suarez at 3:43 AM