The Leopoldo López Case: How to Conduct a Show Trial

The crisis in Venezuela 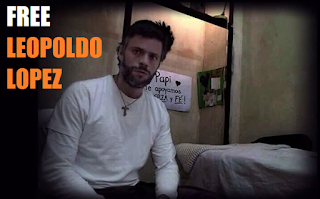 Show trial: n (Law) a trial conducted primarily to make a particular impression on the public or on other nations, esp one that demonstrates the power of the state over the individual. A trial (as of political opponents) in which the verdict is rigged and a public confession is often extracted.  Before the trial even started today outside of the courthouse, a dynamic familiar to Cuban dissidents on the island played out. Opposition activists gathered to show their solidarity with Leopoldo López with a heavy police presence monitoring them. At the same time a large number of pro-regime people showed up and verbally and physically assaulted the opposition activists trying to provoke them. 60 opposition activists were hurt and one man died of a heart attack provoked by the mob. A woman six months pregnant was beaten up by the pro-regime mob that tried to knock her down as she tried to leave the demonstration.


Human Rights Foundation issued a press release condemning the 13- year prison sentence against Leopoldo López. Below is an excerpt that outlines some of the irregularities and places it within a comparative international context:


The criminal proceedings against López were riddled with due process violations. The trial consisted of 70 hearings and took place behind closed doors in violation of the right to a public trial. The media, human rights defenders, and international observers were strictly banned from the courthouse. Out of 700 hours of trial, López’s legal team only had three hours to argue in his defense. In another ostensible display of disproportionality, bias, and unfair treatment in court, Judge Barreiros allowed 108 witnesses and 30 exhibits presented by the prosecution. In contrast, of the 60 witnesses proposed by the defense Barreiros allowed only two, and declared that the bulk of the documentary evidence presented by López’s legal team was inadmissible. Public statements by high-ranking government officials were made declaring López’s culpability in violation of the right to presumption of innocence.

As the criminal proceeding against him was taking place, López was held in the Ramo Verde military prison in Los Teques, Venezuela, where he was subject to torture and cruel, inhuman, and degrading treatment. López’s imprisonment in Ramo Verde was characterized by the violation of international standards on the protection of the human dignity of persons deprived of liberty. Apart from the appalling conditions of captivity and excessive isolation—López has spent at least a third of his time in prison in solitary confinement, having been denied the right to receive visitors, including, at times, his wife and children, and his lawyers—there have been numerous violent searches, and the confidentiality of his communications has been violated.

“Terms like ‘kangaroo court’ or ‘sham trial’ do not begin to describe what happened to López. A teenager with rudimentary knowledge of a fair legal system would have found the charges brought against him absurd. López wouldn’t be in jail if Venezuela were a democratic nation,” said Javier El-Hage, chief legal officer of HRF. “Lopez now joins the group of prominent prodemocracy activists under dictatorial regimes worldwide who have been convicted to serve dozens of years in prison for advocating basic human rights. In 2009, the Chinese dictatorship jailed Nobel Peace Prize laureate Liu Xiaobo on charges of ‘inciting subversion of state power’ after he wrote a democracy manifesto, while in 2012 Kazakhstan’s authoritarian regime convicted the leader of the democratic opposition, Vladimir Kozlov, of ‘inciting social hatred.’ Kozlov, whose case is very similar to that of López, was also convicted for ‘creating and managing an organized criminal group,’ which is the label the regime gave to Kozlov’s political party, in a move very similar to the one Venezuela pursued against López’s party, Voluntad Popular,” said El-Hage.

López’s unjust arrest and incarceration were condemned by multiple institutions worldwide, including Amnesty International, the UN High Commissioner for Human Rights and the European Parliament. HRF was the first organization to declare López a political prisoner and a prisoner of conscience, after determining that the opposition leader had been persecuted, arrested, and imprisoned exclusively for having exercised his right to freedom of expression.