Venezuela Wants to Be Free: Show your solidarity with Leopoldo López Mendoza S19 at 2pm

22 cities protesting for a free Venezuela and in solidarity with Leopoldo López on September 19th and Miami is one of them. Protest to be held at the Torch of Friendship at 2:00pm. 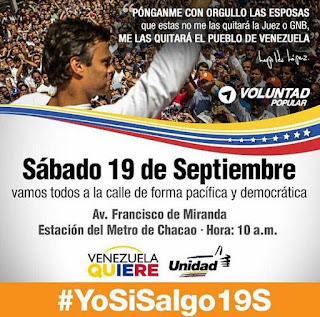 Arbitrary detention and show trial
Leopoldo López Mendoza is a democratic opposition leader in Venezuela who has been arbitrarily detained since February 18, 2014, subjected to a political show trial and sentenced to 13 years and 9 months prison in a process that fell well short of international standards. Following his sentencing on the evening of September 10, 2015 his wife Lilian Tintori read a letter which Leopoldo had written in which he cited a great nonviolent figure:


In these difficult times, I recall the words of the pacifist leader Mahatma Gandhi who said: "You can chain me, you can torture me, you can even destroy this body, but you will never imprison my mind.” Today they have Venezuela in chains but we have the strength, the endurance and the faith to make our country free again.

Call to Action
Five days later on September 15 over twitter he issued a call for nonviolent street protests on September 19th over the course of three tweets which read translated as follows:


"Venezuelans: I reiterate that I feel stronger and more committed than ever to our struggle to achieve the change we need! I alert Venezuela and the world that any attack on my person is the responsibility of Nicolas Maduro and his henchmen!  Lets all go out Saturday peacefully and democratically to the streets. Let's give a testimony of struggle. Change is coming and nothing will stop it!"

Protests are being planned not only across all of Venezuela but also across the world in 22 cities using the hashtag #VenezuelaQuiere, including in Miami, Florida this Saturday, September 19th at 2:00pm at the Torch of Friendship in front of the statue of Simon Bolivar located at 401 Biscayne Blvd. 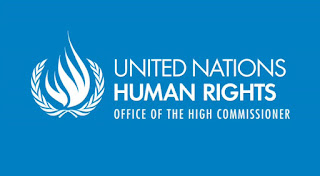 GENEVA (18 September 2015) - The Working Group on Arbitrary Detention of the United Nations Human Rights Council urged the Government of the Bolivarian Republic of Venezuela to proceed with the immediate release of Leopoldo López.

“The sentence was issued after a 19-month long trial conducted behind closed doors and marked by serious irregularities, when the due process and fair trial were not respected; the basis of the allegations were not published; the accused was not allowed to exercise his right to an adequate defense and the exculpatory evidence he offered was not accepted,” affirmed Mr. Seong-Phil Hong, the Chair-Rapporteur of the Working Group.

The Working Group reiterated its request to the Government of the Bolivarian Republic of Venezuela to give due consideration to its Opinion No. 26/2014* recommending the immediate release of Mr. Leopoldo López, and granting him full redress, including moral and material compensation, as well as measures of satisfaction, such as a public statement of apology.

The Working Group also urged the Government of the Bolivarian Republic of Venezuela to consider its request to visit the country in order to contribute to strengthening the rule of law by respecting the independence of the judiciary; judicial guarantees; due process and the effective punishment of those responsible for arbitrary arrests.