In nine days Pope Francis will be arriving in Cuba. This visit will be taking place in an environment of rising repression and efforts to deepen divisions between the Catholic Church and Cuban democrats. In Cuba the Feast Day was observed by the Castro regime with over 140 detentions of dissidents in order to prevent them participating in religious services. Controversies have emerged in recent months with Cardinal Ortega and some local parish priests have barred women dressed in white from attending Mass calling on them to wear clothing of a different color. This is due to pressures arising from a civic movement in which the women dress in white and nonviolently demand that Cuba's political prisoners be released and the legal system changed in order to end the practice of imprisoning people for exercising their rights.

The Church in Cuba is the one institution, outside of the dissident movement, that is independent of the communist regime. It has been subjected to the infiltration of its institutions, repression and hostility for decades. In 2012 Catholic priest Jose Conrado and protestant minister Mario Felix engaged in a dialogue with Antonio Rodiles on the role of the Christian Church in totalitarian Cuba and the challenges still faced. In the diaspora Bishop Agustin Roman offered an overview of the Cuban dissident movement in 2006.

Within this context the Archdiocese of Miami is calling for a prayer action. Archbishop Thomas Wenski asked the South Florida community at the end of the Solemn Mass on the Feast Day for Our Lady of Charity on September 8, 2015 to prepare for Pope Francis’s visit to Cuba with a novena(nine days of prayer) to the Mother of God under her title of “Desatanudos” (Undoer of Knots). This devotion originated in Germany and is a favorite of Pope Francis.

Our Lady, Mother of God and our Mother,
intercessor and advocate in all our spiritual and material needs,
we ask that you untie all the knots that imprison our Cuban people,
the knots of despair, of fear, of loss of God and loss of the values of the faith;
help us break the ties of suspicion, of indifference,
and the sin of not seeing our brother in the other;
of expecting more from the powers of this world than from the strength of God.
We beg you to help us untie, along with you,
all the knots of evil, injustice and sin. Amen.

“Cubans have always been united, regardless of race, class or views, along the same path: the path that leads us to El Cobre.” *

The concepts and language of human rights first emerged out of the Catholic Church in the Middle Ages and the idea that human rights are universal out of the Salamanca School at the end of the fifteenth century. In 1550 Bishop Bartolomé De Las Casas enunciated this principle:


“All the races of the world are men, and of all men and of each individual there is but one definition, and this is that they are rational. All have understanding and will and free choice, as all are made in the image and likeness of God . . . Thus the entire human race is one.”

Four centuries later when nations states twice failed to keep the peace plunging the world into global conflagrations of wholesale slaughter in two terrible world wars that involved genocides, in 1948 the Universal Declaration of Human Rights was drafted and signed by the nations of the world. The document is neither capitalist or communist but informed by the Catholic philosophy of Jacques Maritain and was an initiative led by Latin America.

There are human failings of the Divine Church. Hilaire Belloc best described these failings of the Catholic Church as “an institute run with such knavish imbecility that if it were not the work of God it would not last a fortnight.” This is also why, I believe, the Archbishop is calling on Catholics to pray over nine days to prepare Pope Francis's trip to Cuba.

Let us pray to the Mother of God that His will be done. 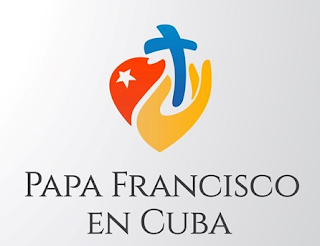