The dangers of a Cuban consulate

Miami mayor Tomas Regalado is correct when he says that opening a Cuban consulate, with the current regime, would be a security risk that would endanger lives in South Florida.  However now Miami Beach mayor Philip Levine and Commissioner Ricky Arriola, apparently ignoring this concern, are advocating opening the consulate on Miami Beach.

Unfortunately for them their highly publicized meeting in Cuba demonstrates why this is a bad idea. They met with a "Cuban diplomat" who was expelled from the United States for his espionage activities. Chris S. Simmons, a 23-year Counterintelligence Officer, from 1996-2004 deeply involved with the majority of US Counterintelligence successes against the Castro regime provides background on the Cuban Foreign Ministry's, deputy director of North American affairs:


The son of a revolutionary hero, Gustavo Machin Gomez, was expelled in November 2002 in retaliation for the Ana Belen Montes case. In 2003, he was Deputy Director of MINREX’s North America Division and Chief the following year. In 2006, he was appointed Cuba’s first ambassador to Pakistan, where he is believed to have targeted US counterterrorism operations in the region. He then returned home to head the International Press Center before his current assignment.

According to Simmons, Machin was involved in the operation to "spin" the death of Oswaldo Payá Sardiñas in 2012:


One example of Machin’s use of his position to conduct Influence Operations is seen in the article, “Jens Aron Modig confirmed Cuba’s version of the accident and acknowledged that he gave money to Payá.” (http://www.walterlippmann.com/docs3500.html)  This article discusses the International Press Center’s new conference starring Jens Aron Modig, the Swedish politician who was with Paya during the vehicle accident that took his life.  It reads, in part, “Modig was presented to the press by Gustavo Machin, director of the International Press Center, attached to the Cuban Foreign Ministry, and was in good physical condition despite being slightly injured in the accident. At the time of writing this information Jens Aron Modig appeared before the accredited foreign journalists in Cuba.”[emphasis added]

We now know that Oswaldo Payá Sardiñas and Harold Cepero were killed in an incident in which state security agents hit their car in a second vehicle, but the rest of what happened afterwards and how both men died requires an independent investigation. 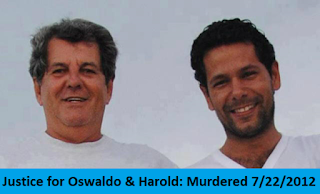 A Cuban consulate in Miami-Dade County would operate as an espionage center used to target Cuban exiles, American military facilities in the area, and other targets. What this would mean in practice can be seen in the information that emerged during the WASP network trial.


The Cuban "WASP" spies arrested in 1998 used coded material on computer disks to communicate with other members of the spy network. Below are two excerpts from the 1,300 pages taken from those diskettes translated and used during the spy trial that demonstrate the criminal nature of the Cuban regime's operation in South Florida. In the first excerpt it declares that their primary objective was "penetrating and obtaining information on the naval station located in that city." In the next excerpt intelligence operatives communicated about "burning down the warehouse" and sabotaging Brothers to the Rescue equipment. Also requested that they attempt to identify who would be flying at certain times.  In the final excerpt operatives discuss plans to prepare a "book bomb" so that it evades post office security while at the same time phoning death threats to a man they describe as a CIA agent and then having him killed via the mail bomb.

This Cuban spy network gathered information that led to the murder of three Americans and a permanent U.S. resident on February 24, 1996. The head of that network Gerardo Hernandez was sentenced to a double life sentence, one of which was for murder conspiracy. President Obama commuted his sentence and returned him to Cuba on December 17, 2014.

The first duty of government is to afford protection to its citizens. Opening a Cuban consulate in Miami-Dade County will needlessly endanger the lives and security of South Florida residents and would be a failure of governance.