Rolling Stones, Performance Art and a Missing Artist in Cuba

"We know that years ago it was hard to hear our music in Cuba, but here we are playing for you on your beautiful land. I think finally times are changing." - Mick Jagger, from the stage in Havana, March 25, 2016 (In Spanish) 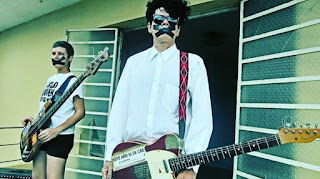 Gorki Águila and Lia Villares of Porno para Ricardo held a performance art protest on March 25, 2016 at 5:00pm prior to the start of the Rolling Stones concert in Havana, Cuba. During the Stones concert in Havana Mick Jagger recognized the prior censorship in Cuba that had banned the Rolling Stones and their music for decades expressing that he thought "finally times are changing" with their playing a concert now in the island. Former Cuban prisoner of conscience Regis Iglesias, and life long Rolling Stone fan tweeted:  "Really Dear Mick? Because the @RollingStones are in Cuba does not mean that anything has changed. Castro [does] not let me return to my own country, I can get no satisfaction, but time is on my side..."

In addition, what transpired before the concert indicates that the British rocker may be mistaken in his belief. Fraudulent change is underway in Cuba as opposed to real change. The dictatorship in order to carry out its dynastic succession makes cosmetic changes while maintaining its repressive and totalitarian nature. 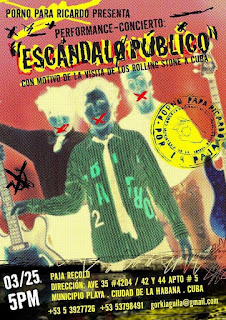 Gorki explained that "upon learning that we were announcing the performance here in the house [state security] closed the block at every corner and did not let anyone pass who had been invited." We saw the deployment of a lot of state security."

Unfortunately, Danilo Maldonado (also known as El Sexto) was arrested on his way to the performance and more than 12 hours later remains missing. El Sexto is a former Amnesty International prisoner of conscience and a performance artist who has been targeted for his works of art. 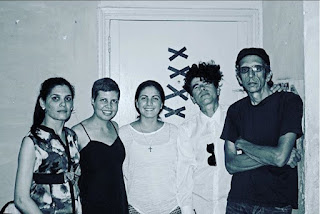 Gorki and Lia were joined later by others, among them activists Sayli Navarro, and Rosa María Payá Acevedo. Earlier today over twitter Rosa María asked people of good will to call the police stations in Havana and ask about the whereabouts of the missing Cuban artist. 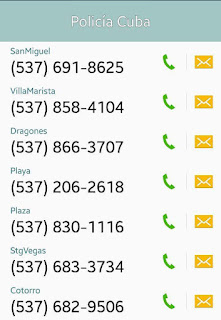 The Rolling Stones put on a great show that pleased hundreds of thousands of Cubans and that will be remembered in the history books. Below is the set list taken from their official twitter feed.