Examining Artistic Freedom in Cuba: Castro regime jailed the second largest number of artists in the world in 2018

According to Danish NGO Free Muse, Cuba was second in the world with 19 artists detained over the course of 2018. 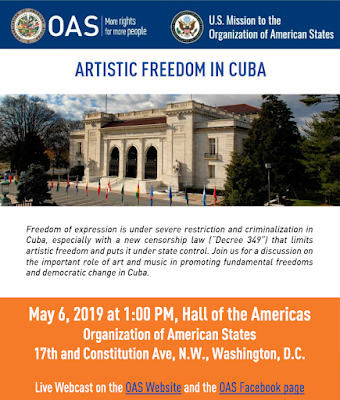 The Castro regime in Cuba continues to repress and censor artists. ArtNews and Art Forum reported in April of 2019 on how Cuban American artist Coco Fusco was denied entry to Cuba and declared inadmissible. She was barred because she had discussed censorship of the arts in Cuba.

The Danish non-governmental organization, Free Muse, focuses on artistic freedom around the world and has released its 2019 report "The State of Artistic Freedom 2019" revealing that, "[a]t least 157 artists were imprisoned or detained in 29 countries.  Spain, Turkey and Russia jailed the highest number of artists in the Global North, while China, Egypt, Iran and Cuba jailed the highest number of artists  in  the Global South. Free Muse detailed those with highest numbers of arrests. In 2018 there were "97 artists detained in 25 countries, including: 20 in Turkey, 19 in Cuba, 11 in Russia, 9 in Egypt, 6 in China."
The Castro regime further tightened down on the few remaining artistic freedoms in Cuba with Decree 349 in 2018. Censorship had already existed in Cuba since 1959 but now with Decree 349 artists are specifically targeted and radically restricted from their work. Cuban artist Coco Fusco in Frieze magazine outlined the full breadth of this law.


Decree 349, was made public last summer and went into effect on 7 December. It criminalizes independent cultural activity that is not authorized by the state. It entails the creation of a cadre of roving inspectors that will be empowered to shut down activities in private recording studios, home-based galleries and clubs. Sanctions range from stiff fines to confiscation of privately-owned equipment to the seizure of homes. Artists on the island see the law as a return to the repressive cultural policies of the 1970s. Before it became law, Amnesty International called Decree 349 a ‘dystopian prospect’ for Cuba’s artists.

In September of 2018 Cuban rapper Maykel Castillo Pérez, "El Osokbo" protested against Decree 349/2018 during a show in Cuba. Three days after the concert, he was detained by the Cuban secret police, and remained jailed. On March 20, 2019 Maykel was sentenced to one year six months in prison, and learned of his sentence on April 22, 2019.

On May 6, 2019 the General Secretary of the OAS and the US Ambassador to the OAS hosted at the Organization of American States an event which was streamed live in both Spanish and English on the lack of artistic freedom in Cuba with independent journalists and independent artists from the island presenting their testimony.

Hopefully, they will be able to return to Cuba without joining the long list of arbitrarily detained artists.
Posted by John Suarez at 2:39 PM