Reflection on history as truth seeking and truth telling

Is history written by the victors?

Spent some time today walking around what had once been a cemetery and a synagogue that were supposed to be disappeared by failed millenerial totalitarians who sought to rewrite history, but not before killing millions. Rejecting indoctrination, ideologies, and narratives in service of political power requires curiosity, persistence, integrity and discipline.

Developing history as an academic discipline means that there is an attempt to reach an objective truth and understanding. This means that historians are driven by understanding and writing down what happened, and that it is not history written by the victors. However, that is often not the case and thankfully it is not that simple.

On March 7, 2006 historian John Lukacs gave the George Herbert Walker, Jr. Lecture at Yale University titled "Popular Tides and the Ship of State" and thankfully his full presentation is available online. However for the purpose of this essay will focus on how he introduced "the main character of his thinking" as follows:


"Contrary to all dominant views or versions of materialism or determinism ...  The fundamental basis of history is what people think and what they believe.  And that the entire material organization of the world is the superstructure of that.  Now at the same time my anti-materialism is also contrary of that of most idealist philosophers because it is my conviction also that ideas as such do not matter. What matters is why, and when and how people choose them. We do not have ideas. We choose them."


Recovering history
In Germany, the National Socialists in the 1930s sought to erase centuries of  Jewish participation in the national life of what would become the nation-state of Germany in 1871. In Frankfurt, the Nazis destroyed synagogues, and Jewish cemeteries. Consider that the Jewish Cemetery on Battonnstrasse dated back to the year 1272 A.D. and that by 1828 the cemetery had to be closed because it was filled with nearly 7,000 graves. 114 years later in 1942 it was destroyed by Nazis.

There was an attempt to erase Jewish life in Germany in the present through the Holocaust, but also erase it in the past and replace it with a narrative prepared by the Nazis in what would've have been their Museum of Extinct Races. According to Bram Presser in Lit Hub:


The Nazis, it is said, had planned a grand display of Jewish life in all its degeneracy so that, for generations to come, visitors could come and offer thanks to Hitler for ridding Europe of its vermin. In a perverse twist, the museum was to be housed across the disused synagogues of Prague

This would have been an example of the victors rewriting history in the service of their ideology.  The reality is that Jewish life has been present in Frankfurt since at least 1150 AD and Jewish residents were herded into a ghetto, the Judengasse, for the first time there in 1562.

Things would get better for the Jewish community over the next three centuries in Germany. In Frankfurt the Börneplatz synagogue was built on the southern edge of the ghetto and consecrated in 1882. The square was named after Ludwig Börne, a Jewish publicist and champion of democracy who was born in Frankfurt’s Judengasse in 1786. All of this progress was swept away with the arrival of the Nazis to power. In 1938, the synagogue was destroyed by gangs of Nazis during the November pogrom. The ruins were removed and a multi-lane road built over it in 1945. 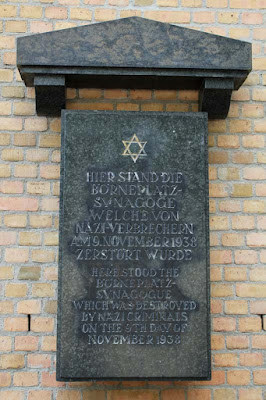 The response of a democratic Germany in Frankfurt to the Nazi efforts to erase and rewrite history was to recover as much of it was possible. The walls of the old cemetery now bear the names of thousands of Jewish residents of Frankfurt deported and killed by the Nazis on small memorial stones. Nearby there is a plaque that reads in both German and English: "Here stood the Börneplatz synagogue which was destroyed by Nazi criminals on the 9th day of November 1938." A museum that rescues the history of German Jews in Frankfurt has been built where the old Ghetto was. It is called the Museum Judengasse.

The case can be made that the Nazis lost the war, and that is why they do not control the narrative today, but there is another high profile case that demonstrates how the side that lost was able to have a dramatic impact on the writing of history. Shouldn't service to the facts and the truth be more important than who won?

The Lost Cause?
The case has been made that in the United States the history of the Civil War or as many Southerner's call it the "War between the States" has been shaped through the prism of the Lost Cause, a perspective given by those who lost.  Slavery was not the sole cause for Southern states seceding from the Union but it was a central motivation. However the Lost Cause narrative seeks to downplay it, and the brutality of slavery. Nevertheless, it played a role in national reconciliation between North and South. The current attempt to demonize Robert E. Lee, in order to justify the demolition of Southern symbols, is driven by ideological motivations. In the Spring of 1861 Robert E. Lee wrote to his sister on his ambivalence with the cause of secession. This quote is taken from an essay by Aaron D. Wolf:


"The whole South is in a state of revolution, into which Virginia, after a long struggle, has been drawn; and though I recognize no necessity for this state of things, and would have forborne and pleaded to the end for redress of grievances, real or supposed, yet, in my own person, I had to meet the question, whether I should take part against my native State.

With all my devotion to the Union, and the feeling of loyalty and duty of an American citizen, I have not been able to make up my mind to raise my hand against my relatives, my children, my home. I have, therefore, resigned my commission in the army; and save in defence of my native State, with the sincere hope that my poor services may never be needed, I hope I may never be called on to draw my sword."

One of the architects of the Lost Cause was Jubal Anderson Early, a  Confederate General,  who personally never owned slaves and strongly opposed secession, but once the decision had been made, by Virginia to leave, joined together with Robert E. Lee and fought against the Union.

General Lee has been called a traitor for defending his home state against the Union, and under U.S. law that is a legitimate charge. However, it would also have been a legitimate charge against George Washington, Thomas Jefferson and the rest of the American Founders. Consider that they were all subjects of the British Empire. Washington, like Lee during the Mexican-American War, fought for the British and was an officer during the French and Indian Wars. The British considered them traitors and could have had them all hanged if they had been captured.

The complexity around Lee's decision involved the competing obligations and duty to both Virginia and the United States. General Lee should neither be vilified or canonized, but both his strengths and shortcomings recognized.

At the same time one cannot ignore who fought to defend a system based in slavery. Following the death of General Robert E. Lee in 1870 Frederick Douglass spoke plainly on his passing and how it was observed:

I am no minister of malice.  I would not strike the fallen. I would not repel the repentant, but may my right hand forget its cunning, and my tongue cleave to the roof of my mouth, if I forget the difference between the parties to that terrible, protracted and bloody conflict.

If we ought to forget a war which has filled our land with widows and orphans, which has made stumps of men of the very flower of our youth, and sent them on the journey of life armless, legless, maimed and mutilated; which has piled up a debt heavier than a mountain of gold - swept uncounted thousands of men into bloody graves - and planted agony at a million hearthstones; I say that, if this war is to be forgotten, I ask, in the name of all things sacred, what shall men remember?

Neither General Lee nor Jefferson Davis were Nazis, and the attempts by some on the Left and some on the Alt-Right to paint them that way does a disservice to American history.  The question is why choose these ideas now from such radically contrasting positions? An even more interesting question is how did the Lost Cause become such a powerful historic narrative for so many decades? How much of it is true? How much of it is false?  This calls for more dialogue, discussion, research and reflection, not censorship or the tearing down of symbols, but better understanding them and their historical context.

In the painting at the top of the page by Jacob de Wit in 1754, Truth almost naked watches over the historian as a history is being written. Meanwhile the Goddess of Wisdom, Pallas Athena, gives the historian advice.  Truth, wisdom and sound judgement are needed to gain a deeper understanding of what really happened and how were are informed by it today.

This should not be the realm of power grabbers, totalitarians, propagandists and ideologues, but of informed and competent truth seekers. The stakes are incredibly important.  Spanish thinker George Santayana was right when he said that  "Those who cannot remember the past are condemned to repeat it."