Time to stop giving the benefit of the doubt.

The Cuban government is denying that it was involved in the smuggling of tons of cocaine on a ship bound for Turkey with a stop in Holland. The Panamanian government is also giving the dictatorship in Havana the benefit of the doubt on the cocaine shipment. The only problem is that the Castro regime lies consistently. The government of Panama is making a mistake.

At least 24 U.S. diplomats and 14 Canadian diplomats have suffered unexplained brain injuries in Havana, Cuba. Symptoms included "nausea, headaches, nosebleeds, hearing and eye problems." Official Cuban government response: The diplomats are victims of mass stress and the sounds that they are hearing are crickets. The Cuban embassy in Washington DC on September 19, 2017 claimed that “Cuba strictly observes its obligations to protect foreign diplomats on its soil” is not true. This is another lie. There is a decades-old pattern of hostility. In 2006, the Miami Herald reported how a high-ranking member of the U.S. mission found his mouthwash replaced with urine. In another case, after one diplomat’s family privately discussed their daughter’s susceptibility to mosquito bites, “They returned home to find all of their windows open and the house full of mosquitoes.” American diplomats, like their Canadian counterparts, have also had pets poisoned while stationed in Cuba. The types of injuries suffered by diplomats since November 2016 are new, but Cuba’s outlaw behavior toward them is not. 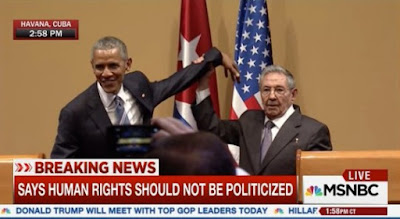 Raul Castro on March 21, 2016 in the joint press conference with President Obama said that there were no political prisoners in Cuba, and if any were identified they would be released immediately. A list of current Cuban political prisoners was provided, but they were not freed.

In July 2013, Cuban officials were caught trying to smuggle tons of arms that included: warplanes, missiles, and technology related to ballistic missile programs hidden under 220,000 bags of sugar to North Korea and lied about it. This was also in violation of U.N. sanctions.

The Castro regime has sought to smuggle narcotics into the United States since 1961, and has been implicated time and time again. Indictments have been issued and documentaries have caught the illicit activities of the dictatorship on film.

According to the UPI in 1982 the following high ranking Cuban officials were indicted by the United States for operatiing a drug ring out of Cuba: Aldo Santamaria-Cuadrado, head of the navy and a member of the Communist Central Committee; Fernando Ravelo-Renedo, ambassador to Colombia; Gonzalo Bassols-Suarez, a former staff member at the Cuban embassy in Colombia; and Rene Rodriguez-Cruz, a Central Committee member and president of the Cuban Institute of Friendship with the People.

If one still has any doubts then take a look at the role the Castro regime has played in Venezuela with regards to narcotics trafficking.
Posted by John Suarez at 8:19 PM