Christian Liberation Movement spokesperson Regis Iglesias released a transcript of the first statement made by Eduardo Cardet Concepción upon his parole on Saturday, May 4, 2019 that is translated here to English:


"Right now I am at home under the terms of what is called conditional liberty, early release. Supposedly my unjust and arbitrary conviction should end on September 30 of this year.

"We are here, by whatever means. Although it is in these ambiguous and unjust terms, it fills us with joy to be here at home, with family, with friends, with brothers. "

"In the first place, I would like to thank so many people of good will who have always been aware of [this case], who have given us all possible support ... I do not want to mention people specifically because there have been many people and, most importantly, I think that It was the recognition of the just cause that we have always followed.

"For a matter of principle, I have been in prison for around two and a half years, but here we are, and we're on our feet, full of life, full of desires and hoping for the best for everyone, especially for our people who are in such a difficult situation right now."

Eduardo Cardet Concepción spent two years five months and four days arbitrarily detained in Cuba by the Castro regime. On Saturday, May 4, 2019 he was paroled under "conditional liberty."  He had been provided a furlough to visit his family for the second time. The first furlough had been in early April 2019.

In a later interview with 14ymedio Dr. Cardet declared: "What I received is what they call anticipated freedom or conditional liberty." ... "It is a half-hearted freedom, it's not a favor of course, but rather a way for them to ease the tensions they have."

United Nations Watch campaigned for the release of Eduardo Cardet filing a successful petition in July of 2018 that was upheld by the working group months later.

In November 2018 the United Nations Working Group on Arbitrary Detention, a quasi-judicial panel of five experts, found that Cuba arrested Dr. Cardet without a legal basis. The UN panel called on Cuba to immediately release Dr. Cardet and grant him reparations.

In addition, the Spanish Senate, members of the U.S. Congress, international human rights gatherings, civil society and the Christian Liberation Movement had all called for his immediate release.


This international mobilization on his behalf is important but it is also important to remember and provide context to what was done to Dr. Cardet.

Eduardo Cardet Concepción is a medical doctor, a husband, and a father of two small children. He is widely respected in his community. He is a person of impeccable moral character. Despite all of this, he was beaten up and arrested in front of his wife and children on November 30, 2016.  In March of 2017 he was subjected to a political show trial and sentenced to three years in prison. Dr. Cardet was beaten up again in prison, was stabbed with a sharp object repeatedly, and denied family visits because they were campaigning for his release. 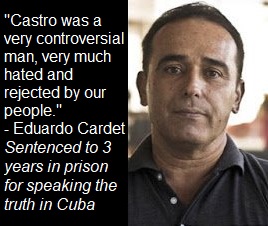 What led to this mistreatment?

Following Fidel Castro's November 25, 2016 death, Dr. Cardet explained to a foreign journalist that "Castro was a very controversial man, very much hated and rejected by our people." On November 30, 2016 when he returned home to Cuba he was beaten up in front of his wife and children by Cuban state security and jailed. Amnesty International has recognized him as a prisoner of conscience.

Eduardo Cardet is the national coordinator of the Christian Liberation Movement. [His predecessor, Oswaldo Payá Sardiñas, met with a suspicious death along with  Harold Cepero Escalante on July 22, 2012.]

Amnesty International observes that as long as Dr. Cardet has been released under conditional liberty and is subject to certain conditions, he remains a prisoner of conscience.

The campaign for his full freedom continues.