Will Castro regime use new internet censorship law to target Cuban doctors who spoke out on public health system collapse in Cuba?

Providing some context to a troubling question.

Frances Robles reporting in The New York Times described how "after Cuba’s prime minister, Manuel Marrero Cruz, said that Cubans were complaining more about doctors and their poor service than they were about the shortages ... nearly two dozen young physicians and medical students took to social media to state, one by one: “I am publicly declaring that doctors are not to blame for the collapse of the public health system.”

Sarah Marsh of Reuters described it as a "rare public denunciation of conditions in the island's hallowed health care system" and made reference to consequences for speaking out critically, but did not provide a specific example.

There are more than one. Here are three well documented cases of doctors who spoke out. The first being abroad didn't suffer consequences. Two others were not so lucky. 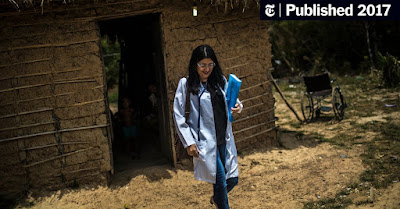 Ernesto Londoño reported on September 29, 2017 in The New York Times that "scores of Cuban doctors working overseas to make money for their families and their country are suing to break ranks with the Cuban government, demanding to be released from what one judge called a 'form of slave labor.'" Further on in the same article appears the following powerful quote. “When you leave Cuba for the first time, you discover many things that you had been blind to,” said Yaili Jiménez Gutierrez, one of the doctors who filed suit. “There comes a time when you get tired of being a slave.”

Dr Omar del Pozo, a 47-year-old physician and prisoner of conscience, was imprisoned in 1992 and sentenced to a 15-year prison sentence in Combinado del Este Prison for “revealing state secrets”. Amnesty International in 1997 expressed "concern that according to the latest reports his health has deteriorated and in addition to suffering from high blood pressure, apical abscesses, a stomach ulcer and heart and kidney problems, he is also suffering from malnutrition. He is reported to have received harsh treatment and lack of medical treatment in prison."

Desi Mendoza Rivero, a 43-year-old doctor and father of four children, was sentenced to eight years' imprisonment in connection with his critique of the authorities' handling of a dengue fever epidemic in Cuba in 1997. Amnesty International recognized him as a prisoner of conscience, and eventually he was able to leave prison for forced exile in Spain.

Doctors speaking out today, like Dr. del Pozo, and Dr. Mendoza Rivero in the past, risk prison sentences for what they have done.

Giving voice to "fake news" in Cuba, disseminating it, publishing offensive messages or defamations that harm "the prestige of the country" are now a crime. The Castro regime with its own history of propagating fake news decides who is "guilty" of it over social media. This new decree issued by the dictatorship entered into force today, Wednesday, August 18, 2021. Decree-Law 35 penalizes "ethical and social" harm done "or incidents of aggression " on social media, reported 14ymedio yesterday. The text entering into force was approved back on April 13, 2021, but the content was not known until Tuesday, August 17, 2021 noted 14ymedio.

Among its novelties, this ministerial decree contains the "classification of incidents of cybersecurity and their level of dangerousness", such as the "dissemination of false news, offensive messages, defamation with an impact on the prestige of the country." The level of dangerousness is classified as "high" in Annex II taken from the regime's Gaceta Oficial and reproduced below. 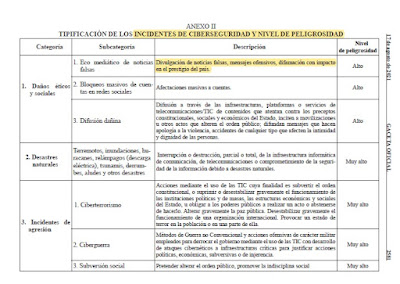 The claims made in the media that Decree-Law 35 is the first cybersecurity law passed in Cuba are wrong. This is the latest Decree passed to restrict speech on the internet, with some new elements but not the first. Decree 370 issued by the Cuban government on July 4, 2019 threatens fines and imprisonment for any Cubans expressing themselves over the internet in a manner that the authorities find objectionable. The decree also prohibits foreign web hosting while law existing prior to Decree 370 already prohibited critical content on domestic servers. Less than a year later on May 6, 2020 over forty national and international NGOs signed a joint statement denouncing the consequences of Decree 370.

Although repression of freedom of expression and freedom of press has been long-standing and systematic, the current wave of repression has been intensified by the application of Legal Decree 370 “ON THE COMPUTERIZATION OF CUBAN SOCIETY,” in force since July 4, 2019. At least 30 people have been subjected to interrogation, threats, and seizure of work equipment (especially that of journalists) for broadcasting their opinions on social media, 20 have been victims of 3,000-peso fines (120 US dollars), an amount triple the average monthly salary. Failure to pay these fines constitutes a crime punishable by six months in prison, a systematic approach that has enabled the Cuban State to sentence 7 civil society actors who are currently in prison.

The totalitarian nature of repression in Cuba has not changed in decades nor the efforts of the dictatorship to ever perfect their panopticon on a national scale. What changed was the spontaneous protest of tens of thousands of Cubans across more than 50 cities and towns, knowing what awaited them, shouting that they were not afraid, down with the dictatorship, down with communism and homeland and life. The brutal and violent response by the dictatorship that still continues and is reflected in this new legislation is not new, but the widespread resistance to it is.

The future of these Cuban doctors who spoke out will depend in large part to the vigilance of the international community, and the response of Cubans on the island.

Repression is not new, but the refusal of Cubans to continue tolerating it is. Witnessing the events across Cuba that began on July 11, 2021 with a national cry of defiance that brought to mind the words of Frederick Douglass: “Find out just what any people will quietly submit to and you have the exact measure of the injustice and wrong which will be imposed on them.”