Black Ribbon Day 2021: The Hitler-Stalin Pact that started WW2 which communists would like to erase. 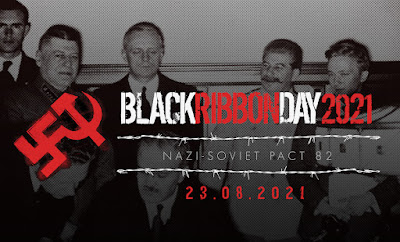 Eighty two years ago on August 23, 1939 the world was shocked to learn that Communist Russia and Nazi Germany had signed a non-aggression pact, the Molotov-Ribbentrop pact. It was named after their respective foreign ministers, Vyacheslav Molotov and Joachim von Ribbentrop. Observers would have been even more horrified had they known of the secret protocols that divided Eastern Europe between the two totalitarian regimes. What they called a "peace treaty" in reality was a war treaty.

Nine days later on September 1, 1939 at 4:45 am Nazi Germany invaded Poland and World War II started. Sixteen days later the Soviet Union exercising its secret agreement with the Nazis invaded Poland from the East and met their German allies in the middle of Poland.

On September 22, 1939 the German Nazi army joined with the Soviet Communist army in a military parade in Brest-Litovsk and the two sides celebrated together. Soviet Foreign Minister Vyacheslav Molotov in a October 31, 1939  speech spoke candidly about the Nazi-Communist alliance, and ridiculed its victims.

"The ruling circles of Poland boasted quite a lot about the ‘stability’ of their state and the ‘might’ of their army. However, one swift blow to Poland, first by the German Army and then by the Red Army, and nothing was left of this ugly offspring of the Versailles Treaty which had existed by oppressing non-Polish nationalities."

Approximately 230,000 Polish soldiers and officers and thousands of military service representatives were taken captive by the Russians. The Soviet precursor to the KGB was the NKVD. "From October 1939, the delegated NKVD officials from Moscow heard the prisoners, encouraged them to cooperate and collected data. Only a few of the prisoners agreed to collaborate. The commanding officers’ reports included opinions about hostile attitudes of the Poles and a minimal chance of them being useful to the USSR authorities."

The decision to shoot the prisoners was signed on March 5, 1940 by seven members of the All- Union Communist Party (Bolsheviks) authorities: Joseph Stalin, Lavrentiy Beria (proposer), Kliment Voroshilov, Vyacheslav Molotov, Anastas Mikoyan, Mikhail Kalinin and Lazar Kaganovich.  Thousands of Polish Army officers and intellectual leaders were taken into the Katyn Forest near Smolensk in the Soviet Union, shot in the back of the head or in the neck and buried in mass graves. 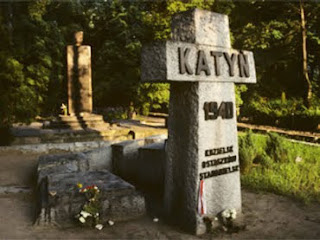 Secret protocols of the Hitler-Stalin Pact not only partitioned Poland but also divided up Lithuania, Latvia, Estonia, Finland and Romania into Nazi and Soviet "spheres of influence." The Soviet Union invaded and annexed the Baltic States in June 1940.

Soviet Foreign Minister Vyacheslav Molotov in a speech delivered on August 1, 1940 while the Soviet Union was then still allied with Nazi Germany continued to describe their military alliance as a "non-aggression pact."

Another sign of Nazi-Soviet cooperation was the Soviet Union’s deportation of hundreds of refugees to Nazi authorities. Most of them were German anti-fascists, communists, and Jews who had sought asylum in the Soviet Union.

This should not have come as a complete surprise.

Communist morality has no problem with any of it because as the communist revolutionary Vladimir Lenin observed in a speech to Russian communist youth on October 2, 1920:


"The class struggle is continuing and it is our task to subordinate all interests to that struggle. Our communist morality is also subordinated to that task. We say: morality is what serves to destroy the old exploiting society and to unite all the working people around the proletariat, which is building up a new, communist society."

Both ideologies sought to destroy the old existing order and replace it with a new one. The Nazis with a society based in ideas of racial purity and the Communists with the destruction of all existing class structure. On the surface these ideas are in conflict, but in practical terms both sought to destroy the existing social and political order.

The same people who would join Hitler's brown shirts were also susceptible recruits to join Antifa. Communists viewed the SA as a "proletarian-revolutionary paramilitary wing"of the Nazi movement and susceptible to being recruited to the communist cause. The case of Richard Scheringer, a supporter of Adolf Hitler and army officer who converted to communism in the early 1930s is a high profile example of this.

Harvey Klehr, the Andrew W. Mellon Professor of Politics and History, Emeritus, at Emory University, described how communists had mistakenly viewed the Nazis as a means to achieving power and undermining capitalist democracies. Antifa identified all political parties that were not communist as fascist. This meant that social democrats, centrist political parties, and conservative parties were together with the Nazis all labeled fascist. This was the Comintern's class against class approach and fractured any potential broad anti-Nazi coalition.


"Adolf Hitler’s rise to power in 1932 had been immeasurably aided by the German communists' steadfast support for the Comintern tactic of “class against class,” which demanded no cooperation with other anti-Nazi forces. German communists blithely insisted that Hitler’s triumph would be evanescent—summarized in their optimistic slogan, Nach Hitler, kommen wir ('After Hitler, us').

The Molotov-Ribbentrop pact is this strategy but on a grander scale. Let the Western democracies and the Nazis exhaust each other in the conflict and then seize everything. Victor Davis Hanson, a Senior Fellow at the Hoover Institution. reported that "Stalin shipped huge supplies of food and fuel for the German war effort against the West."

The Communist International (Comintern) issued new orders to their members once the non-aggression pact was made public. Professor Klehr described the new directive.


Good communists were ordered to oppose anyone intending to stand in Hitler’s way.  With Ribbentrop’s second visit to Moscow at the end of September and the signing of a German-Soviet Treaty of Friendship, the Comintern emphasized that the primary adversary was those countries that were at war with Germany, and those socialists and social democrats fighting against fascism. Germany had concluded a pact with the USSR, while “reactionary” England, at the helm of a vast colonial empire, was the “bulwark of capitalism.” Thus, communist parties in England and France were ordered to call for the defeat of their countries—ordered, in other words, to officially embrace treason.

According to Klehr, Nazi reports confirmed that Communists were fulfilling their part of the agreement siding against Western Democracies.


A June 1940 Gestapo report approvingly noted that the Soviet government was favorably disposed to the Third Reich and had endorsed its invasions of the Scandinavian states and Belgium and Holland “as necessary and proper.” The report went on to note that the Comintern had avoided open attacks on Germany,  and that the parties and publications allied with the Comintern were not pushing for communists to struggle against National Socialism or denounce fascism.

This alliance ended on June 22, 1941 when Hitler launched Operation Barbarossa, the invasion of the Soviet Union, betraying his ally Josef Stalin.

"Stalin was shocked; he had received a plethora of warnings of an imminent invasion – notably from Winston Churchill, informed by British intelligence briefings. The communist dictator had refused to believe them," reported Agence France Press. Stalin preferred to rely on Hitler's assurances.

Today, communist apologists will continue to defend Stalin and attempt to cover up this history of collaboration between the Soviet Union and Nazi Germany. It may also explain the real reason behind attacks on the legacy of Winston Churchill. His observation on the relationship between the Communists and the Nazis in his book The Second World War, Volume 1, The Gathering Storm (1948) is damning and accurate.

"Fascism was the shadow or ugly child of communism… As Fascism sprang from Communism, so Nazism developed from Fascism. Thus were set on foot those kindred movements which were destined soon to plunge the world into more hideous strife, which none can say has ended with their destruction."

The Molotov-Ribbentrop Pact and the reckless strategy pursued by Stalin and the Communist International cost 22 to 28 million Russian lives alone in World War Two, and nearly led to the Nazi conquest and occupation of the Soviet Union.

It also led to Poland spending another half century under Soviet domination and Lithuania, Latvia and Estonia territories absorbed by the Soviet Union. A conquest that arose out of the Hitler-Stalin pact that endured following the end of WW2.

It was a nonviolent movement thirty two years ago that liberated the Baltic nations. The Baltic Way brought an end to this part of the Nazi-Soviet non-aggression pact.

On June 4, 1989 the Solidarity labor movement won in free elections and the Polish people finally regained their sovereignty after nearly 50 years under Soviet domination. They did it nonviolently.

So did the people of the Baltic states when two million Latvians, Lithuanians and Estonians joined hands together in a giant human chain stretching 370 miles on August 23, 1989. Fifty years to the day after the treaty that brought them so much grief had been signed.

This history must not be forgotten. The Spanish scholar George Santayana understood that "those who cannot remember the past are condemned to repeat it."

Across the world in Europe and the Americas Black Ribbon Day continues to be remembered with acts of remembrance. Today at 3:00pm at the Legislative Assembly in Alberta Canada there will be a Black Ribbon Day commemoration. The Honourable Nathan Cooper, Speaker of the Legislative Assembly of Alberta, will host the event and made the following video.

Over social media the Lithuanian Foreign Ministry offers an overview of the Hitler-Stalin Pact.

On August 23, 1939, two totalitarian states – Nazi Germany and the Soviet Union – concluded a notorious Non-Aggression pact, which paved the way for #WWII and its consequences - millions murdered, tortured, exiled, occupied states, and many years of the Cold War tensions. pic.twitter.com/95rFRmUhBV

The Polish government is also remembering this day.

Today is the European Day of Remembrance for Victims of Stalinism and Nazism.

Marking the anniversary of the #RibbentropMolotovPact, we pay homage to all victims of totalitarian regimes around the world. #BlackRibbonDay pic.twitter.com/9zZtRvznRT

Remembrance of the nonviolent action that brought the Hitler-Stalin Pact finally to an end is also being shared on social media.

One of the great nonviolent actions in history. Learn more about the nonviolent defence of the Baltic states in How to Start a Revolution https://t.co/IwT2L1EHoc #latvia #lithuania #estonia #nonviolence #genesharp https://t.co/ttz2NxQeTR

The Inimitable #BalticWay - a chain of 2 mil. people, 600km long, connecting Lithuania, Latvia and Estonia 32 years ago. The purpose of this peaceful political demonstration was to show that the aspirations for freedom and democracy in the #Baltic countries were never quenched. pic.twitter.com/liwzSIgyJ4