Documentary on Chinese Artist and Dissident Returns to Miami

"To live your life in fear is worse than losing your freedom." - Ai Weiwei 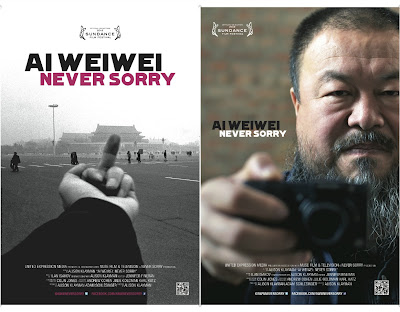 Powerful documentary on Chinese artist and dissident Ai Weiwei returns to screens in South Florida this weekend in Miami at the Cosford Cinema and on Miami Beach at the Cinematheque.

If you didn't see the film at the Miami International Film Festival back in March 2012 then be sure not to miss it now. Ai Weiwei: Never Sorry is a 2012 documentary that follows and gains complete access to Ai Weiwei.

The documentary demonstrates the power of nonviolent action when applied creatively. Protesting the Beijing Olympics, documenting the number of school children killed in the May 12, 2008 Sichuan Quake, and pursuing justice after he was physically assaulted by a Chinese police officer applying creative and artistic sensibilities in an effective manner combined with great courage.


Ai Weiwei has been beaten, detained, disappeared for 81 days and prosecuted for his outspokenness despite being one of the better known Chinese artists in the world.  He was so badly beaten that he required fluid to be surgically removed from his skull.

Despite this he continues to speak out and make China his home.  He has also received powerful demonstrations of solidarity from the Chinese populace which are seen in the documentary.

He is the son of a prominent Chinese poet who was persecuted during the Cultural Revolution and comes from the ranks of China's elite.

The official website of this documentary offers the following description of its main subject and the film:


Ai Weiwei is China's most famous international artist, and its most outspoken domestic critic. Against a backdrop of strict censorship and an unresponsive legal system, Ai expresses himself and organizes people through art and social media. In response, Chinese authorities have shut down his blog, beat him up, bulldozed his newly built studio, and held him in secret detention.

AI WEIWEI: NEVER SORRY is the inside story of a dissident for the digital age who inspires global audiences and blurs the boundaries of art and politics. First-time director Alison Klayman gained unprecedented access to Ai while working as a journalist in China. Her detailed portrait provides a nuanced exploration of contemporary China and one of its most compelling public figures.