In Solidarity with the Hong Kong 47: A call for hope and action

Over the past 71 years the Chinese Communist Party (CCP) has murdered tens of millions of Chinese citizens, backed the Khmer Rouge in Cambodia, and the Kim regime in North Korea. The CCP through its lack of transparency, silencing of Chinese scientists and journalists, has led to a global pandemic that has killed hundreds of thousands and crashed the global economy.

These are the fruits of engaging with a mass murdering totalitarian dictatorship, but too many have not learned the lesson, and seek to return to the old unacceptable status quo.

Press accounts report that "39 men and eight women are charged with 'conspiracy to commit subversion' in connection with the unofficial primary to choose opposition candidates for the now-postponed 2020 Legislative Council election, which attracted some 600,000 voters." These 47 activists face great legal jeopardy in China, but in a free country they would be congratulated for being good citizens.

In early January 2021 mass arrests were carried out and grueling bail hearings are now underway that have left four of the defendants hospitalized due to exhaustion.

In the largest single crackdown yet on the opposition under a China-imposed national security law, 47 pro-democracy campaigners and activists were charged in Hong Kong https://t.co/XB2YAb3utd pic.twitter.com/sNL5gqsaSo

One of the youngest defendants is 23-year-old Wong Ji-yuet, she is  a first time political hopeful. The pro-democratic primary nominee won 22,911 votes, and came in third in the NTW Constituency in Hong Kong. Let us speak up for her and the other 46 who are unjustly persecuted.

In the Orwellian world that is the Peoples Republic of China in the 21st century, exercising democratic rights under the National Security Law imposed last year on Hong Kong is grounds for a maximum sentence of life in prison.

Worse yet, members of the UN Human Rights Council supported this law stifling democracy and freedom of expression.

The Chinese Communist Party in a secretive legislative process circumvented Hong Kong's sovereignty and imposed this new law a day earlier on June 30, 2020, the 23rd anniversary of the British handover of Hong Kong.

This action is a breach of the agreement made with the British.  Professor Johannes Chan, a legal scholar at the University of Hong Kong in a BBC news report explained that "effectively, they are imposing the People's Republic of China's criminal system onto the Hong Kong common law system, leaving them with complete discretion to decide who should fall into which system."

Hong Kong media tycoon Jimmy Lai, in an interview with the BBC put it more succinctly, "It spells the death knell for Hong Kong."

Today 47 citizens of Hong Kong are being subjected to China's communist legal system for exercising their fundamental human rights, that prior to June 30, 2020, had been recognized by the government in Hong Kong and tolerated by Beijing.

It is worthwhile to explore Cuba's role in backing this repressive measure.

Communist China and Cuba are joined by ideology

President Xi, who is also general secretary of the Communist Party of China Central Committee, exchanged congratulatory messages with Raul Castro Ruz, first secretary of the Communist Party of Cuba Central Committee, and Cuban President Miguel Diaz-Canel to celebrate the 60th anniversary of diplomatic relations between the two communist dictatorships.

In September 1960 the Cuban government diplomatically recognized the Peoples Republic of China. Between 1960 and 1964 the two regimes would collaborate closely together.

Ernesto "Che" Guevara with a Cuban delegation visited Mainland China and met with Mao Zedong, Zhou Enlai, and other high ranking Chinese officials in November 1960 to discuss conditions in Cuba and in Latin America, and the prospects for communist revolution in the Western Hemisphere. 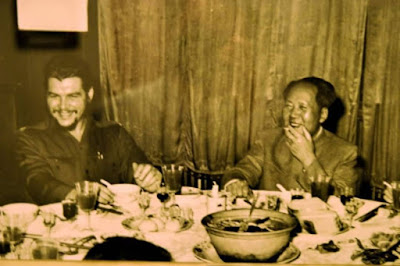 Cuba's relationship with the Soviet Union provided Havana with expertise in biological warfare and biotech that had been denied the Chinese due to the above mentioned split. The Castro regime beginning in the late 1980s began offering that knowledge to their counterparts in Beijing and signed a  formal agreement to produce monoclonal antibodies in 2002.

The two regimes have been working closely together during the COVID-19 pandemic that originated in Wuhan, China in December 2019.  Above is a video presentation given in April 2020 on this relationship.

Little surprise that on July 1, 2020 the Castro regime took the lead in backing the new security law in Hong Kong that effectively ends freedom there.

We must do what we can to speak up for our Chinese brothers and sisters imprisoned for non-violently exercising their rights in the defense of human rights and democracy.

Erazim V. Kohák in his book Jan Patočka: philosophy and selected writings refers to Patočka’s “solidarity of the shaken” as a community freed “from the preoccupation with the pursuits of peace and prosperity that inevitably lead to war and turn it instead to the pursuit of the Good, the care of the soul” that is “living with a clear conscience, living in truth, or in far older terms, seeking first the Kingdom of God.”

This solidarity of the shaken is not passive resistance but an active nonviolent resistance to injustice. People of goodwill must join together to resist this expanding tide of totalitarianism and authoritarianism, and in doing so preserve freedom.

In 1990 in his book, Disturbing the Peace, the late Czech President, and dissident, Vaclav Havel reflected on the nature of hope, and it is even more relevant in these challenging times.

“Hope, in this deep and powerful sense, is not the same as joy that things are going well, or willingness to invest in enterprises that are obviously headed for early success, but rather an ability to work for something because it is good, not just because it stands a chance to succeed. The more unpromising the situation in which we demonstrate hope, the deeper that hope is. Hope is not the same thing as optimism. It is not the conviction that something will turn out well, but the certainty that something makes sense, regardless of how it turns out."

Let us be hopeful, and not despair, continuing to speak out for brethren in China and elsewhere that repression and injustice are operating.