26 mental patients dead due to negligence and indifference 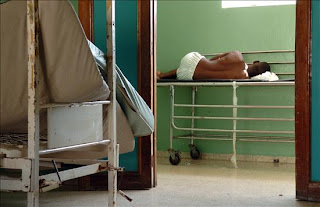 What is indifference? Etymologically, the word means "no difference." A strange and unnatural state in which the lines blur between light and darkness, dusk and dawn, crime and punishment, cruelty and compassion, good and evil. Elie Wiesel, The Perils of Indifference

Over the past week while the world has rightfully focused on the natural disaster that has killed tens of thousands of innocent Haitians destroying the poorest country in the Western Hemisphere necessitating an international wave of solidarity and assistance to prevent an even greater tragedy. Neighboring Cuba continues to suffer through a man made disaster that over the past week has been guilty of indifference to those too infirm to take care of themselves leading to 26 needless deaths.

The New York Times reported on Friday, January 15, 2010 that after Cuban human rights activist Elizardo Sánchez, of the "illegal" Cuban Commission for Human Rights, denounced the confirmed deaths of at least 20 mental patients at the Psychiatric Hospital known as Mazorra on Thursday due to "criminal negligence by a government characterized by its general inefficiency" and that a day later the Cuban government confirmed that 26 patients had died due to “prolonged low temperatures that fell to 38 degrees” after in an interview with El Nuevo Herald the day before Sánchez expressed his outrage at the regime's silence over the man made tragedy:

“Never in the history of the republic have so many hospital patients died -- avoidable deaths. …The most irritating thing is that the government is keeping silent. … This is a great tragedy, not a hurricane, not an earthquake, but criminal negligence by a government characterized by its general inefficiency.”

The Cuban Commission for Human Rights reported that the government did not do enough for the patients due to problems like faulty windows. According to The Miami Herald report on the interview "[a]pparently there was no warm clothing, and above all no concern that the patients be warmly clothed,'' said the representative of the Cuban Commission for Human Rights adding that "[a]t 5 p.m. on Monday they received a very limited dinner. By Tuesday morning, they were dead." Let no one forget that Dr. Darsi Ferrer documented the lack of windows in hospitals and for his efforts has been beaten, threatened, and has now been imprisoned without trial since July of 2009. Back in November the myth of Cuban healthcare was outlined on this blog.

According to the Cuban Commission for Human Rights, Cuba does not accept the cooperation of the International Commission of the Red Cross (ICRC) or other nongovernment organizations that "could prevent situations dangerous to the health of people in psychiatric hospitals, prisons . . . and other entities." For example since 1959 the ICRC was only granted access to Cuban prisons once in 1989 over 20 years ago.

It makes one wonder whether in addition to Mazorra there is another madhouse at the Council of State of the Cuban dictatorship or worse a profound indifference to human suffering of those who cannot fend for themselves by those running an absolutist totalitarian dictatorship?