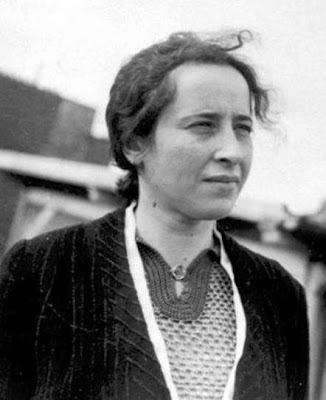 "Does conscience function at all or is it ‘social’? Which means, does it not function at all? Was it really possible to change the morals of a whole people like table manners?" - Hannah Arendt

IV. The moral side of the matter came to light after the war through court room procedure. The grandeur of the courtroom is that no one can any longer be a cog. To excuse yourself with – merely a cog, everybody else would have done it – is immaterial, because the judge looks only at you and asks: And why did you become a cog or continue to be a cog? All you say about cogs is at best mitigating circumstances.

And when this moral side came to light, there was the horror that it had been quite easy to still the conscience of a whole people — except a numerically small minority. When we think of morality, we think of conscience, but the words, morals as ethics, means manners, customs, conventions etc. Hence the question with which we are confronted is pretty serious: Does conscience function at all or is it “social”? Which means, does it not function at all? Was it really possible to change the morals of a whole people like table manners? There were however the minority of non-participants — we are not concerned with heroes or saints — but with everybody.

V. 1. What is required of conscience in a situation in which you have nothing but yourself to guide you? You pit yourself not only against the legal system of the country but against public opinion. 2. Since totalitarianism relies on the atomization, you are – or think you are – one against all. For every communication is dangerous. The man whom you trust today may change tomorrow, and then you are lost. Those who think likewise are not known to you. 3. You apparently hold fast to standards which have lost all reality, they appear nowhere. 4. Empirically: Those who were always used to hold fast to standards without examining them, without doubting, who were conventional and respectable were the easiest to coordinate. The doubters, skeptics, rebels, and the like were much harder to sway. For this is a system with its own standards, and unexamined standards, simply accepted upon authority – or public opinion – crumble the moment they are no longer real. All that is left then is the habit to have standards to hold fast to something. And such standards are supplied by the new order.

VI. Those who did not participate were neither people who were old-fashioned enough not to accept new standards nor were they in possession of better ones. Their conscience did not function in this mechanical way — where you have a law and then subsume all particular cases under it. They were arrogant enough to judge by themselves. And their criterion, I’d suggest, was Socratic: Socrates said not only: Better to suffer than to do wrong, but he explained it: It is better to be at odds with the whole world than being one to be at odds with yourself. They asked themselves if they would still be able to live with themselves after having done certain deeds. And they decided not to participate, not because the world would be better (not because of political responsibility) and not because they were worried about the salvation of their soul, but because they wanted to go on living with themselves. They refused to murder not so much because they still held fast to the command Thou Shalt not Kill but because they were unwilling to live together with a murderer.

The presupposition for this kind of judging is the habit of examining and living together with yourself. We call that silent dialogue in which you speak with yourself thinking, but it is not technical, not the privilege of the educated and sophisticated. No one was easier to lure into the new morality-trap than the intellectuals because they can produce ideas for everything and they have a tendency to judge according to what makes them produce such things as notions and ideas.

We have a tendency to think of people who are in the habit of examining basic propositions and standards as destructive. We have every reason to change our minds on this subject. Doubters and skeptics are more reliable, not because doubting is wholesome or skepticism good but because such people are used to make up their own minds — to live together with themselves. 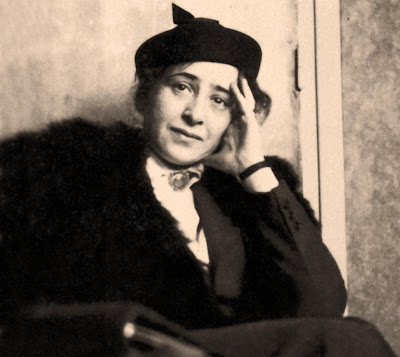 Hannah Arendt
VII. This attitude of non-participation, of not doing certain things quite irrespective of the world, is politically a marginal situation. It is irresponsible, and such irresponsibility is justified when you are completely impotent. Hence it is the right attitude in extreme situations, and it can also be the right attitude for those who have made Thinking a way of life — the philosopher, or whoever claims freedom from politics, which our body politic guarantees to all citizens.

Against this attitude, the current claim was: Every citizen has a duty to obey the laws. He cannot examine the laws and then decide whether or not they are good laws; such conduct would undermine every body politic. No government can survive without this obedience. This is a fallacy, and it resides in the word obedience. Only a child obeys. An adult actually supports the laws or the authority that claims obedience. No action is possible without support and help from others. The one who starts action needs the support from others to see the matter through. Without such “obedience,” a leader is helpless — whereas in the nursery the child is helpless or the slave when they refuse to “cooperate.” If I obey the laws of the land, I actually support its constitution, and every revolution starts when this tacit consent is withdrawn.

In political terms, the non-participants to the extent that they came in conflict with the laws of the land did not claim freedom from politics but withdrew their consent, refused to support by shunning such places of responsibility where such support under the name of obedience was required, or by paying with their lives for non-obedience.

VIII. In conclusion: Moral responsibility begins where political responsibility ends, where you either can’t or won’t do anything for this world. In certain inhuman political situations it may be a sign of courage to admit impotence and to say: I don’t want any part of this world, I shall not take my share and shall not participate. Then, there is nothing left but life itself in its sheer thereness. And now you will decide according to this criterion only – the old Socratic criterion: If I can’t do this (f.i. examine myself and those around me) life is not worth living, and if I must do that – for instance. kill or bear false witness against my neighbor – I won’t be able to live with myself any longer. And though there may be many people who don’t live with themselves — and that means who, strictly speaking, have no conscience — for me life would not be worth living if I lost myself. If you are lucky, this moral attitude under totalitarian dictatorship leads you only into isolation from your fellow-men, if you are unlucky it leads you into death.