"I have learned over the years that when one's mind is made up, this diminishes fear; knowing what must be done does away with fear." - Rosa Parks 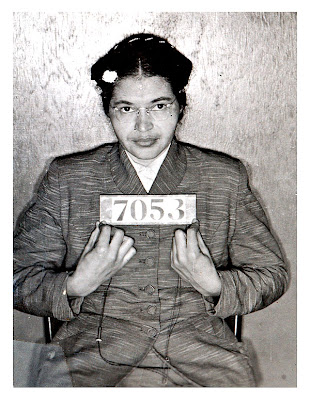 Before the 1960 lunch counter sit-ins in Greensboro, North Carolina and the Reverend Martin Luther King Jr. there was Rosa Parks. In the video below she recounts the events surrounding her arrest. On December 1, 1955 in Montgomery, Alabama sitting in the back of the bus [the area reserved for African Americans during Segregation] the "white" section having been filled to capacity with a white man standing the bus driver told Rosa Parks to stand up and give her seat to him.

Rosa Parks refused and a nonviolent moment that would generate a movement that would tear down legal segregation was mobilized. She was arrested, finger printed, photographed, jailed and fined $14 dollars for refusing to give up her seat. 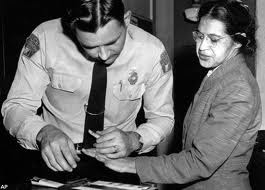 Rosa Parks finger printed in December of 1955 following her arrest. Below her finger prints. 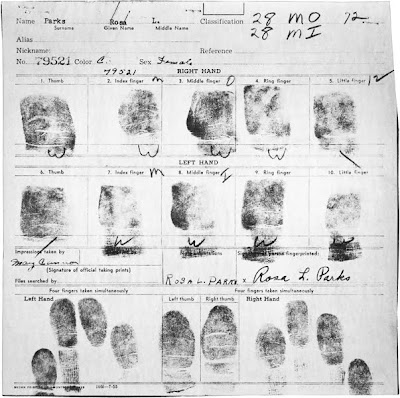 She appealed the ruling. The next day the Women’s Political Council called for a bus boycott in on December 5, 1955 but seeing the huge turnout and intensity the decision was made to expand it and on that day the Montgomery Improvement Association formed to coordinate the boycott with the Rev. Martin Luther King Jr. elected the chairman of the organization. Carpools were formed and African Americans stopped riding the buses in Montgomery. 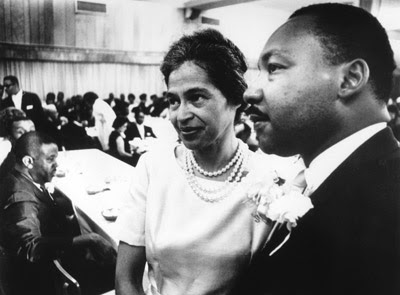 On January 30, 1956 Martin Luther King Jr.'s home was bombed but the boycott continued and remained nonviolent. On November 15, 1956 the U.S. Supreme Court rules that bus segregation laws were unconstitutional. The boycott ended on December 21, 1956 when the Montgomery City Lines desegregated. The bus boycott had lasted 382 days, and turned both Rosa Parks and the Reverend Martin Luther King Jr. into national figures. Civil disobedience had triumphed over brute force and terror.