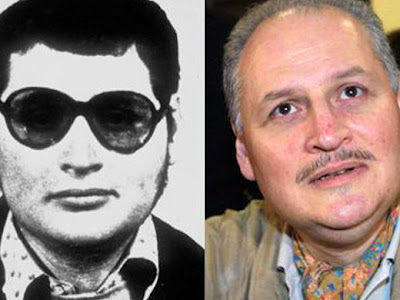 Illich Ramirez Sanchez a.k. Carlos the Jackal
1970s and after his capture in 1997
“There is a discipline in the Venezuelan Communist Youth to which I belonged at the time. I don’t have the right to speak in its name. And you should ask the Venezuelan Communist Party which still exists whether I went to Cuba at that time. And the Cuban authorities too.” - Carlos the Jackal

Bill Cosford Cinema at the University of Miami will be showing CARLOS a 2010 French/German production directed by Lixin Fan, screenplay by Olivier Assayas and starring Edgar Ramirez in the title role of Carlos the Jackal between December 17-23, 2010. It was screened at Sundance and on the Sundance channel. The film demonstrates the evolution of international terrorism in the 1970s, but leaves out its origins in the 1960s.

According to Major David E. Smith USMC in his 1995 paper "The Training of Terrorist Organizations":

Although terrorism originated centuries ago, modern international terrorism orchestrated by the Soviet Union arguably began at the Tricontinental Conference conceived by Moscow and conducted in Havana, Cuba during January l966.[13] The purpose of the conference was to devise a "global revolutionary strategy to counter the global strategy of American imperialism."[14] It resulted in the creation of an African, Asian, and Latin American Solidarity Organization based in Havana. The Conference also passed resolutions advocating outside aid for groups fighting for "liberation". During late l966, the Cubans opened a number of training camps for guerrilla fighters in Cuba that were under Soviet supervision. Palestinian groups began sending students to these facilities on the "Isle of Pines" during l966, and upon graduation, those students spawned the terrorist groups that exploded in the Middle East during the l97O's. Castro's terrorism schools were under the supervision of the Dirección General de Inteligencia (DGI). Students were flown into the country from connecting airports, or arrived in Cuban harbors by boat. Upon debarkation in Havana, they were segregated by nationality and moved to their individual training locations. The guerrilla courses lasted from three to six months. Subject material included "tactics, weapons training, bomb making- particularly how to blow up oil pipelines, map reading, cryptography, photography, falsification of documents, and disguise."

There is much more on Cuban involvement in international terrorism and there are numerous sources alleging that a 17-year old Illich Ramirez Sanchez who would later become known as Carlos the Jackal attended the 1966 Tricontinental Meeting and received training in Cuba. 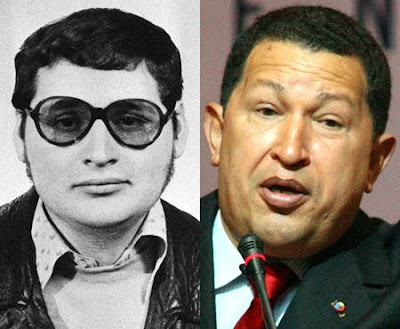 Chavez an admirer of terrorist Carlos the Jackal
It matters little whether he did or not because he was the ideological offspring of Fidel Castro and Che Guevara. Ramírez Sánchez, Venezuelan by birth, described by Venezuelan "president" Hugo Chavez as a "revolutionary fighter" in November of 2009 is an ideological soul mate of Chavez, the heir apparent to Castroism-Guevarism ideology. According to French intelligence services Ramírez Sánchez is responsible for more than 80 murders.

On December 24, 1997 he was convicted of murder by a French Court and sentenced to life in prison stated at his sentencing: "I am satisfied and I am proud I chose my cause when I was 14 and I have never strayed." According to the New York Times, "His real cause was anti-Americanism, adopted when he was a student in the 1960s looking for a way of defying U.S. domination and capitalist values the way Fidel Castro and Che Guevara had done for Cuba before him."

Regime apologists downplay the significance of the Tricontinental meeting and its relationship to the upsurge of terrorism in the late 1960s and 1970s but there are artifiacts from that time that still remain in circulation: in 1970 the Cuban government published the "Mini Manual for Revolutionaries" in the official Latin American Solidarity Organization (LASO) publication Tricontinental, written by Brazilian urban terrorist Carlos Marighella, which gives precise instructions in terror tactics, kidnappings, etc. and translated into numerous languages which were distributed worldwide by the Cuban regime. There is a chapter advocating terrorism:

Terrorism is an action, usually involving the placement of an explosive or firebomb of great destructive power, which is capable of effecting irreparable loss against the enemy. Terrorism requires that the urban guerrilla should have adequate theoretical and practical knowledge of how to make explosives. The terrorist act, apart from the apparent ease with which it can be carried out, is no different from other guerrilla acts and actions whose success depends on planning and determination. It is an action which the urban guerrilla must execute with the greatest calmness and determination. Although terrorism generally involves an explosion, there are cases in which it may be carried out through executions or the systematic burning of installations, properties, plantations, etc. It is essential to point out the importance of fires and the construction of incendiary devices such as gasoline bombs in the technique of guerrilla terrorism. Another thing is the importance of the material the urban guerrilla can persuade the people to expropriate in the moments of hunger and scarcity brought about by the greed of the big commercial interests. Terrorism is a weapon the revolutionary can never relinquish.

Incidentally an online copy of the above mentioned text is displayed on the website of fugitive Assata Shakur who fled to Cuba in 1984 for the murder of a police officer.

While serving a life sentence in France Ramirez Sanchez has written a book praising Osama Bin Laden's "shining" example arguing that "revolutionary Islam" - which is the title of his book - is the post-Communist answer to what he calls US "totalitarianism". A sentiment shared by Hugo Chavez in his embrace of the Islamic Republic of Iran and close working relationship with its president Mahmoud Ahmadinejad. 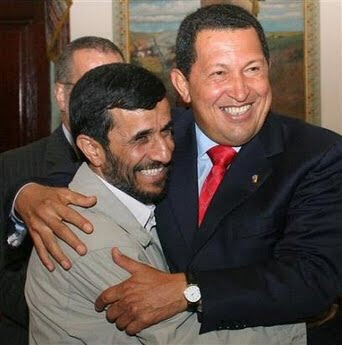 The film Carlos is recommended viewing for those who do not see the connection between revolutionary Marxist ideals and terrorism. It should open their eyes.
Posted by John Suarez at 3:16 AM