U2 Rocks Miami: Bono's love song for a free Cuba and shout out to Oscar Elias Biscet

Oscar Elias Biscet and U2 Concert in Miami on June 29, 2011
"Now I would like you to do something we've never done before. A beautiful man, a doctor who has spent his time in the prisons of Cuba. He is also released. His name is Dr. Biscet. I want you to hold him up. Let everyone in Cuba know that he is special to us and we are watching WE ARE WATCHING. Hold him in your thoughts. Hold him in your prayers." - Bono at Sun Life Stadium on June 29, 2011

“As you read me what he said, I was shaking with happiness because it showed it’s good when one is chosen as a symbol of his people. He’s praising not me but all my people, all Cubans, and I agree that Cuba will be free, if people like Bono join the cause” of human rights on the island. - Dr. Oscar Elias Biscet, Havana, Cuba on June 30, 2011 to El Nuevo Herald, which first told him of Bono’s comments. 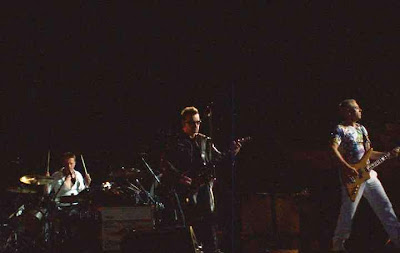 There wearing this Biscet t-shirt preparing to toss a spare one brought for if the opportunity presented itself during the show at the Sun Life Stadium and progressing steadily to the front row in the outer ring of the field area. All of a sudden Bono begins talking about a free Cuba and dedicates a song from their 2009 album No Line on the Horizon with the title "I'll Go Crazy If I Don't Go Crazy Tonight" which contains the following lyrics :

Every generation gets a chance to change the world
Pity the nation that won't listen to your boys and girls
Cos the sweetest melody is the one we haven't heard
Is it true that perfect love drives out all fear?
The right to appear ridiculous is something I hold dear
Oh, but a change of heart comes slow

Further on in the song "I'll Go Crazy If I Don't Go Crazy Tonight":

It's not a hill, it's a mountain
As we start out the climb
Listen for me, I'll be shouting
Shouting to the darkness, squeeze out sparks of light

The song pleads for the nation to listen to the new generations and about the power of love to drive out fear. Towards the end of the song the words indicate the height of the challenge and the need to speak up to denounce the darkness and struggle for light. A beautiful anthem and a love song for a free Cuba.

This was followed by "Sunday Bloody Sunday", a song originally about the troubles in Northern Ireland but relevant today too so many places where people struggle in the midst of conflict. The color green dominated during the song in honor of the Green Movement in Iran. The song is a rejection of violence.

Last part of If I go Crazy followed by Sunday Bloody Sunday
From previous encounters with U2 any fan would know that the song "Walk On" was written for and dedicated to former prisoner of conscience and human rights activist Aung San Suu Kyi of Burma. It also meant that there was a second opportunity for the band to make a statement on Cuba. They did not disappoint. U2 began playing "Scarlet" which lyrically is the word "rejoice" repeated and on this evening was dedicated in honor of Suu Kyi's recent release from prison. The band transitioned into "Walk On" with Bono giving a shout out to Dr. Oscar Elias Biscet, who was also recently freed, when Amnesty International walked around the stage with the glowing symbol of the organization. At that moment realized whether or not the spare t-shirt reached the stage the message had been given. The words of "Walk On" are powerful and apply to all prisoners of conscience:

You're packing a suitcase for a place none of us has been
A place that has to be believed to be seen
You could have flown away
A singing bird in an open cage
Who will only fly, only fly for freedom


U2 ended Walk On with a snippet of "You'll Never Walk Alone" a 1945 show tune from Rogers and Hammerstein that has been covered by Frank Sinatra, Gerry & the Pacemakers, Judy Garland, Elvis Presley, Johnny Cash and Doris Day. An excerpt of the lyrics reveal words of inspiration and encouragement for anyone facing adversity:

An excerpt from U2.com's report on the Miami show North Star Over Miami:

A shout- out to Lebron James - who is here and gets a mighty reception - and also to Carl Willner, the father of producer Hal, a longtime friend of the band. Carl has recently published a remarkable book, Carl's Story; The Persistence of Hope, a memoir of how as a teenager he survived the concentration camps of Auschwitz, Buchenwald and Dachau.

'Are you ready to take the roof off... if we had a roof?' By Vertigo everyone was ready and the roof we didn't have was duly removed. 'Crazy' became ' a love song to Cuba - one day Cuba will be free' and as Walk On arrived, Bono invited everyone to remember Cuban human rights activist Dr Oscar Elias Biscet. Dr Biscet endured many years in prison in Cuba for opposing the government and received the Presidential Medal of Freedom from President George Bush in 2007. 'Let everyone in Cuba know he is special to us and we are watching... we are watching.'

After four decades U2 is still on top form musically and still manages to do the unexpected. Looking forward both to their next album and concert.

The Miami Herald has a good breakdown of the concert. The Associated Press has more information about the shout-out in Miami to Cuban human rights activist Dr. Biscet. Below is the song set list (hyperlinks are to original or concert videos of the songs) :

Even Better Then the Real Thing

Until the End of the World

Get on Your Boots

Pride (In the Name of Love)

Where The Streets Have No Name

Hold Me, Thrill Me, Kiss Me, Kill Me

With or Without You