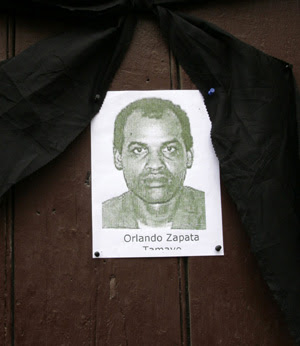 The Associated Press reported today that the remains of Orlando Zapata Tamayo, a Cuban dissident and Amnesty International prisoner of conscience who died on February 23, 2010 following an 83-day hunger strike, were exhumed for cremation Tuesday as his mother, Reina Luisa Tamayo Danger, prepared to travel with the ashes and 12 family members to exile in Florida. His death ignited protests throughout the island and increased international scrutiny on the dictatorship in Cuba and marked a before and an after in the Cuban civic resistance movement.

Today Orlando Zapata Tamayo's body was exhumed for cremation and tomorrow marks one month since Juan Wilfredo Soto Garcia died just three days after being beaten up by Cuban state security. Guillermo Fariñas is now in the midst of another life threatening hunger strike demanding that those responsible for the death of Wilfredo Soto be brought to justice.

There are twelve Cuban prisoners of conscience of the Black Spring now free in Cuba thanks in large part to the sacrifice of Orlando Zapata Tamayo; a hunger strike carried out by Guillermo Fariñas' and the courageous and persistent Ladies in White brutalized and beaten by regime mobs as they silently marched demanding their loved ones freedom. These twelve Cuban patriots met and issued the Declaration of Roque, a petition demanding an independent investigation into the death last month of Cuban dissident and former political prisoner Juan Wilfredo Soto Garcia. The document was signed on Saturday, June 4, 2011 and delivered to the Cuban regime on Monday, June 6, 2011. They are carrying on the spirit of Orlando Zapata Tamayo with their courageous example. The original text is on the page of the Ladies in White and a translation to English follows below:

Petition to the Cuban government

Given the high centralization of power and decisions that exist in our country, we hold responsible the Cuban president and Army General Raul Castro Ruz, in fulfillment of the three following aspects that are reported below:

2 Of the imminent death of the peaceful activist and Andrei Sakharov prize laureate, Guillermo Fariñas Hernández, as a result of the hunger strike that he is carrying out.