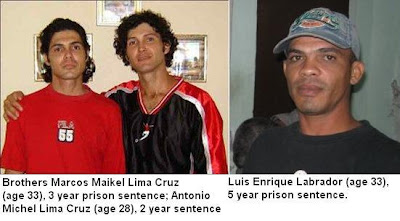 Three of the Six

(Washington, DC) - The conviction of six dissidents in summary trials for doing no more than exercising their fundamental rights highlights the continuing abuse of the criminal justice system to repress dissent in Cuba, Human Rights Watch said today. Raúl Castro's government should immediately release the prisoners, who were given sentences ranging from two to five years in prison, and cease all politically motivated repression against Cubans who exercise their fundamental freedoms, said Human Rights Watch.

Four people were sentenced on May 31, 2011, in Havana for distributing pamphlets criticizing Raúl and Fidel Castro, and two human rights defenders in Holguín were sentenced on May 24, charged with "insulting national symbols" and "disorder" for public acts that they denied had taken place.

"With this new round of prosecutions, the Castro government is sending a clear message to dissidents that the status quo has not changed in Cuba," said José Miguel Vivanco, Americas director at Human Rights Watch. "Publicly criticizing the government can still earn you a harsh prison sentence."

Luis Enrique Labrador, 33; David Piloto, 40; Walfrido Rodríguez, 42; and Yordani Martínez, 23, were sentenced in Havana on May 31 on charges of contempt and public disorder. An official document addressed by the state prosecutor to the Criminal Court of Havana, a copy of which was obtained by Human Rights Watch, said the four were detained on January 14, when they went to Havana's Revolutionary Square and threw leaflets into the air with slogans such as "Down with the Castros."

When agents of the National Revolutionary Police arrived at the scene, the four men sat down on the ground, an act the prosecutor deemed "a defiant and provocative attitude...that interrupted the traffic flow." Martínez was sentenced to three years in prison, while the other three were each sentenced to five years, according to their families and human rights defenders in Cuba.

Family members told Human Rights Watch that state security agents had visited their homes the day before the trial, warning relatives that if they "created a scene" and called attention to the hearing, the detainees would be left in pretrial detention indefinitely. One man's mother said she was fired in April on the grounds that she was "the mother of a counterrevolutionary." The families also told Human Rights Watch that Martínez and Piloto went on hunger strike in May in Valle Grande prison to demand they be put on trial. In response, they later told their families, they were handcuffed and beaten by a prison official.

In a taped interview with a Cuban human rights defender, Juan Carlos Gonzalez Leiva, which was later replayed for Human Rights Watch, Rodríguez called the trial a "a mockery." He said the judge simply rubber-stamped the prosecutor's recommended punishment, ignoring the defendants' arguments in their defense. Elizardo Sanchez, the director of the Cuban Commission on Human Rights and National Reconciliation, an independent human rights group not recognized by the Cuban government, told Human Rights Watch that state security agents surrounded the local courthouse where the trial took place, preventing human rights defenders and other members of the public from attending.

On May 24, Marcos Maikel Lima Cruz, 33, and Antonio Michel Lima Cruz, 28, brothers who were members of a human rights group in Holguín called Pedro Luis Boitel - were sentenced to three and two years in prison respectively in a closed, summary trial. Their father, the independent journalist Marcos Antonio Lima Dalmau, said the two were arrested on December 25, 2010. Lima Dalmau, who was allowed to attend his sons' trial, said they were accused of insulting national symbols and causing public disorder for allegedly dancing naked in front of their house, and spitting, urinating, and stepping on a Cuban flag, which both denied.

Human Rights Watch believes that the charges were fabricated to prosecute the brothers in retaliation for their human rights work. Lima Dalmau said that one of the witnesses who testified in their trial - a neighbor - said he had accompanied police when they inspected the brothers' home, and had seen the flag hanging undamaged on a wall.

Cuba's laws empower the state to criminalize virtually all forms of dissent, and grant officials extraordinary authority to penalize people who try to exercise their basic rights. The Cuban Criminal Code penalizes anyone who "threatens, libels or slanders, defames, affronts or in any other way insults or offends, with the spoken word or in writing, the dignity or decorum of an authority, public functionary, or his agents or auxiliaries." The violations are punishable by one to three years in prison, if directed at high ranking officials. Such laws violate the right to freedom of expression recognized in article 19 of the International Covenant on Civil and Political Rights - signed by Cuba in 2008.

"The dissidents were prosecuted on the basis of their political beliefs, and because they dared to exercise rights that all Cubans should enjoy," Vivanco said. "They should never have even been tried, let alone convicted."