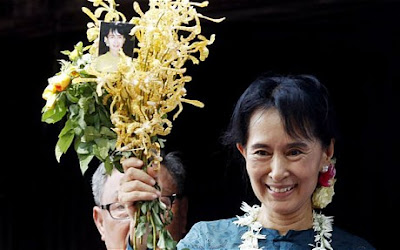 In Burma it is Sunday, June 19, 2011 and the celebrations have begun observing an important birthday. Unfortunately, it is taking place in the midst of the outbreak of violence in Burma.

An exemplar of nonviolent resistance turns 66 years old today. The word "icon" is not here because she does not consider herself to be one. Aung San Suu Kyi has demonstrated throughout her life a commitment to a free and democratic Burma putting her own life on the line.

On her birthday she has sent a message to the women of India to join her in a campaign for a Burma "free from fear" asking for help in ending human rights abuses in Burma and obtaining freedom for the political prisoners imprisoned there. She understands what it means to live in a country without freedom and asks for international solidarity to assist in freeing her homeland Burma.

She also has the courage to speak out for human rights and greater freedoms for the Chinese people.

Her example has inspired people around the world, including activists in Cuba such as Jose Gabriel Ramon Castillo “Pepin” a Cuban pro-democracy activist and former Amnesty prisoner of conscience now exiled in Spain. Today, Cuba's Ladies in White wished Suu Kyi a happy birthday on their Twitter account,hours after conducting a successful nonviolent demonstration of their own on Father's Day demanding freedom, stating: "Happy Birthday to Aung San Suu Kyi of #Burma from all the Ladies in White."