MLK Jr. Monument in Washington DC: Too much of Pharaoh, not enough of Moses

"There are two types of laws: there are just laws and there are unjust laws...What is the difference between the two?...An unjust law is a man-made code that is out of harmony with the moral law...Paul Tillich has said that sin is separation. Isn't segregation an existential expression of man's tragic separation, an expression of his awful estrangement, his terrible sinfulness?" – Martin Luther King, Jr., 1963

Update August 26, 2011: Due to Hurricane Irene, Sunday's ceremony and events have been postponed indefinitely for a later date. Also press reaction to the monument continues to be critical.

The Martin Luther King Jr. national memorial opened in Washington D.C. located between the Jefferson and Lincoln memorials to the public yesterday on August 22, 2011, just six days before the 58th anniversary of his historic "I have a Dream Speech." According to the Christian Science Monitor this will be one of the last new structures to be built on the mall.

Martin Luther King Jr. was targeted by both the FBI and the KGB with active measures to try to discredit the nonviolent civil rights leader. The unveiling of this memorial on the national mall is further evidence that they both failed in their efforts.

However there are a number of ironic twists to the monument that may be at the root of the controversy surrounding its construction. It is done in a style of socialist realism by an artist who has sculpted statues of Mao Zedong and has a life time stipend from a regime that tramples on fundamental human rights including the rights of workers. Martin Luther King Jr. was a man who boldly challenged entrenched power and authority that was unjustly wielded both in the institutions of racial segregation and militarism. His methods were both radical and nonviolent and grounded in his Christian beliefs. This meant a fundamental defense of human dignity and rights.

The August 28, 1963 "I have a dream" speech delivered from the Lincoln Memorial needs to be placed in its appropriate context it was part of the The March on Washington for Jobs and Freedom a demonstration where approximately a quarter of a million people gathered on the National Mall to call attention to racial discrimination while demanding justice and freedom.

Less than five years later on his last night on Earth, in his final speech, Martin Luther King Jr. spoke before the American Federation of State, County & Municipal Employees, AFSCME about the Memphis Sanitation Strike that brought King to Memphis, Tennessee. The workers had gone on strike to protest poor treatment, discrimination, dangerous working conditions and work related deaths. Critics of the monument cite that the granite was brought over from China because it was cheaper due to dangerous working conditions:

"We can't work for $1 or $2 a day," Button said, referring to low-cost Chinese granite -- and the human rights concerns tied to it. "My family and the unions fought for safety regulations, none of which exist in China. You see [Chinese miners] wearing little masks or cloth over their faces, but all that does is filter out the big pieces that get stuck in your nose. The deadly dust goes straight into your lungs."

Martin Luther King Jr. on April 3, 1968 concluded his speech referencing the Old Testament and the path taken by Moses that he was now taking:

"We've got some difficult days ahead. But it doesn't matter with me now. Because I've been to the mountaintop. And I don't mind. Like anybody, I would like to live a long life. Longevity has its place. But I'm not concerned about that now. I just want to do God's will. And He's allowed me to go up to the mountain. And I've looked over. And I've seen the promised land. I may not get there with you. But I want you to know tonight, that we, as a people, will get to the promised land. And I'm happy, tonight. I'm not worried about anything. I'm not fearing any man. Mine eyes have seen the glory of the coming of the Lord."

The irony is that the 30 foot tall monument dedicated to, as Morehouse College describes the Reverend Martin Luther King Jr., "our American Moses" seems to have more of Pharaoh than of Moses in how he is presented in the Stone of Hope. Tragically in not demanding safer working conditions for the Chinese workers who mined the granite for this monument and in effect exploiting them to obtain a cheaper price the foundation behind building this memorial also failed to live up to the greatness of the example set by the man they wished to honor.

Nevertheless the controversy surrounding the memorial has the potential to generate more dialogue and the words of the civil rights leader reproduced at the memorial do him honor:

World peace through nonviolent means is neither absurd nor unattainable. All other methods have failed. Thus we must begin anew. Nonviolence is a good starting point. Those of us who believe in this method can be voices of reason, sanity, and understanding amid the voices of violence, hatred, and emotion. We can very well set a mood of peace out of which a system of peace can be built. – Martin Luther King, Jr. December 1964 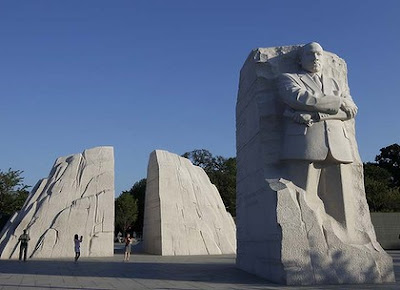 National monument to honor Martin Luther King physically portrays the civil rights leader more as pharaoh than the American Moses that he was.

There is no pleasure in writing the above critique but as one who aspires to be one of Reverend King's creatively maladjusted the need to speak out and participate in a respectful dialogue to denounce an injustice is less harmful then remaining silent.

Over the course of this week there are a number of events planned around the unveiling of this memorial called a "Week of Dedication." The schedule of events are reproduced below and tickets can be purchased at the official website for the memorial.

Partners In The Dream

The Message in the Music

Women Who Dare to Dream

Concert on the Mall


The Washington Post uploaded a video about this new memorial that is embedded below: