There is a debate underway in Ireland to erect a monument to Ernesto "Che" Guevara and their is also an online poll for people to vote in favor or against. I voted against and invite you to do so as well. Here is my reasoning as to the "no" vote. 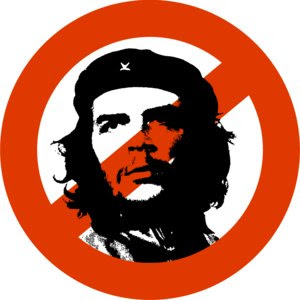 Do you really want your community to be remembered for building a monument to a man who said in Havana on April 16, 1967 that “Hatred as an element of the struggle; a relentless hatred of the enemy, impelling us over and beyond the natural limitations that man is heir to and transforming him into an effective, violent, selective and cold killing machine. Our soldiers must be thus; a people without hatred cannot vanquish a brutal enemy.”

Che Guevara’s call to action in a hemisphere with too many military juntas led to new military juntas in countries that had not known them before in their history: Brazil, Ecuador, Panama, and Uruguay all had their first long term military juntas after the Castro regime began exporting guerillas in 1959 and Guevarist ideology best summed up in Guevara’s Message to the Tricontinental. Other countries such as Chile, who had known a military junta between 1924 and 1931, in reaction to communist threats in 1973 embraced Augusto Pinochet who remained in power for seventeen years. With the exception of Nicaragua, Che Guevara’s prescription for revolution in Latin America led to a generation of military dictatorships and harsh repression. In Nicaragua it led to a Marxist dictatorship and civil war.

According to Irish writer Eilis O'Hanlon the bloody legacy of Che Guevara has also made its mark in Ireland in September of 2009 when a 600 pound bomb was diffused twice as large as the one that claimed 29 lives there a decade earlier.

Honoring a mass murderer who advocated a totalitarian system that took 100 million lives in the 20th Century is shameful. However Che Guevara went further advocating the placement of nuclear weapons in Cuba and advocating their use explaining: “What we affirm is that we must proceed along the path of liberation even if this costs millions of atomic victims.” The Argentine communist further claimed that "the people [of Cuba] you see today tell you that even if they should disappear from the face if the earth because an atomic war is unleashed in their names... they will feel completely happy and fulfilled." Guevara was upset that Kruschev had backed down in the Cuban Missile Crisis in 1962 and not launched a nuclear attack on the United States.

This is the individual some want to honor with a monument?

After Che Guevara who will be next: Carlos the Jackal, Josef Stalin or Adolph Hitler? Glorifying men who committed terrorism and mass violence serves only to glorify and encourage more violence and terrorism.

Why not build a monument to Mohandas Gandhi, Martin Luther King Jr. or Leo Tolstoy instead?

Why not honor those who successfully fought injustice using just means?  Or honor the Cuban people the way they have honored the Irish people by building a monument to Cuban hunger strikers who have died defending human dignity and human rights in Cuba such as Pedro Luis Boitel, Roberto López Chávez, Carmelo Cuadra Hernández, Olegario Charlot Pileta, Enrique García Cuevas, Orlando Zapata Tamayo and Wilman Villar Mendoza in January of 2012?