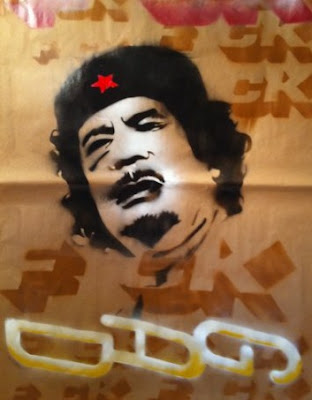 Qaddafi as Che icon
The BBC reported on October 7, 2011 that the image of Che Guevara made it onto the list of top icons in the world. Three days later on October 10 came across a blog entry from Capitol Hill Cubans that echoed a sentiment that has been raised here in different contexts: Inspiring Violence Across the Globe with a focus on Yemen. The picture first posted in the Spanish publication El País with the headline "Che Guevara in Yemen." 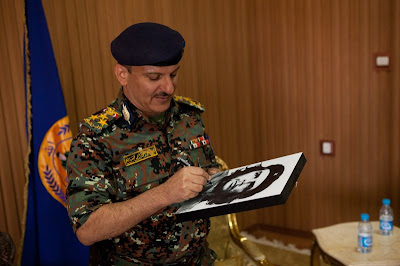 Yemeni General Yehya Mohamed Abdalá Saleh, the head of that country's brutal security services. During the interview, General Yehya expressed his great admiration for Che Guevara and "the Cuban model of democracy" then pulled out a picture of Guevara and autographed it.

Ideas have consequences and those ideas are sometimes represented by iconic images. This is the case with the image of Che Guevara and the philosophy of political action that he advocated and that other seek to emulate. In Havana, Cuba on April 16, 1967 Ernesto "Che" Guevara presented the essence of what should drive the revolutionary in a message to the Tricontinental, a gathering of guerrillas, terrorists and other activists:

"Hatred as an element of the struggle; a relentless hatred of the enemy, impelling us over and beyond the natural limitations that man is heir to and transforming him into an effective, violent, selective and cold killing machine. Our soldiers must be thus; a people without hatred cannot vanquish a brutal enemy."

In Yemen as in Cuba women have been assaulted by rock and club wielding men sent by the security services. On this blog the bloody impact of Che Guevara and his ideology have been reported. From the rise of military dictatorships in Latin America in response to Guevara's call for a bloody continent wide revolution to their coordinating efforts, successfully, to do away with leftist guerrillas like Guevara in Operation Condor. Another bloody episode was adding fuel to the fire in Northern Ireland. Gerry Adams of Sinn Fein, the civilian arm of the Irish Republican Army (IRA) euphemistically said that "Che was one of the inspirations for the Northern Irish civil rights movement." Whereas Mohandas Gandhi inspired Martin Luther King Jr. to nonviolent civic action. Che Guevara inspired the IRA into greater acts of terrorism and guerrilla warfare. The first with Gandhi's nonviolent vision the latter with Guevara's violent one. 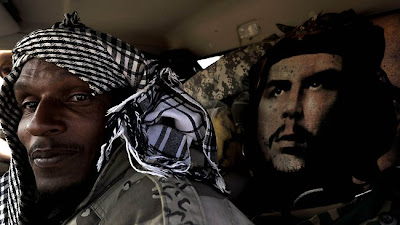 Libyan rebel sitting in vehicle with image of Che Guevara
Australia's News Limited reported on March 28, 2011 that jubilant rebels had set eyes on Qaddafi's home town. At one time Qaddafi himself was viewed as an "African Che." This meant that Qaddafi's rule was brutal, bloody and short for dissenters. At the same time the rebels, also embracing Guevara's bloody political code, have in their uprising against a tyrant also engaged in war crimes and despicable behavior. This does not bode well for what ever emerges out of the conflict in Libya.

Both Mohandas Gandhi and Martin Luther King Jr. accomplished more than Che Guevara and achieved far greater authority over millions of people. Unlike Che Guevara they murdered no one. Both men also rejected hating and dehumanizing their adversaries. Gandhi was able to end British colonialism in his homeland and King was able to end Jim Crow segregation and empower African Americans with the vote.

What did Che do? Not much.

Che Guevara played a small role in the overthrow of a corrupt dictatorship in Cuba with a similarly corrupt military that the rebels could buy out when unable to fight them. After Batista fled into exile Che helped organize firing squads for defeated adversaries and for comrades in arms that were against the communist project in Cuba. Once Guevara encountered a professional military adversary, first in Africa and later in Latin America, he suffered defeat after defeat until being hunted down and executed in Bolivia. His is a record of failure but because he was photogenic and his philosophy appeals to base and violent impulses it is his image on t-shirts and graffiti around the world. The current shift to the left in Latin America was achieved at the ballot box not through armed struggle.

It is time to take a page out of the Gandhi and King handbook by boycotting businesses that sell Guevara's image and ostracizing those who wear it. The icon and what it represents: an appeal to hatred to generate greater violence in the pursuit of the total destruction of the adversary was an evil ideology in 1967 and continues to be so today as well as having proven to be suicidal in many cases for the practitioners.