Patterns of Repression and Human Rights Violations in Cuba

“It's up to all of us to try - and those that say that individuals are not capable of changing anything are only looking for excuses.” - Vaclav Havel, on Amnesty International's 50th Anniversary in 2011 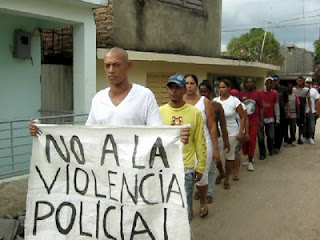 Alex  Sutton is right when he says that there is no free speech in Cuba and this also applies to the international press based there that know if they reported the news accurately they would be kicked out  of the country by the regime as many international reporters have already been. If you want to have an idea of what is actually going on you are better off reading the tweets of independent journalists and human rights defenders on the island.


There are two constants in the patterns of repression and human rights violations in Cuba over the past 53 years and they are the rising body count of victims and the use of fear as a tool of political control to maintain power over the Cuban populace.Underestimating the Castro regime has been a great mistake made by numerous policy makers and analysts. The Cuban intelligence service (known as G2) was formed and trained by the East German intelligence service known as the Stasi.  Like their East German counterparts the Cubans have not only infiltrated dissident groups on the island but the highest levels of the United States intelligence services and State Department. The case of Ana Belen Montes should serve as a warning to those that underestimate this dictatorship. The poisoning of dissidents and staged car accidents were standard tactics of the Stasi that the Cuban intelligence service adopted.
Rudolph Joseph Rummel, a political science professor at the University of Hawaii and an expert in Democide (murder by government) estimates 73,000 Cubans were killed between 1959 and 1987. Pascal Fontaine in chapter 25 of The Black Book of Communism  states that in Cuba between 1959 through the late 1990s between 15,000 and 17,000 Cubans were executed by firing squad. The Cuban Archives place the number at 100,000 killed.

Remember that freedom of expression and a free press are non-existent in Cuba. Amnesty International on June 30, 2010 reported on how “Cuba's repressive legal system has created a climate of fear among journalists, dissidents and activists, putting them at risk of arbitrary arrest and harassment by the authorities.” The activists suffering the imprisonment, in many cases, have overcome their fear. The repression they suffer is to make them an example to others in the populace. Human Rights Watch first described the Cuban regime of having a "repressive machinery" in 1999. Twenty years later when Fidel Castro the human rights group reaffirmed in a new report "New Castro Same Cuba" that the repressive machinery remained intact.

The United Nations Committee against Torture on June 25, 2012 delivered a scathing report on torture in Cuba and the lack of legal safe guards. The Cuban constitution and the criminal code explicitly deny Cubans their right to their own opinions that are contrary to the interests of the regime to preserve and promote communism. The lack of a free and independent media that is systematically persecuted and censored means that little information gets out of Cuba and even less gets to the population on the island. In addition to these laws the proclivity to dissent is also prohibited. The possibility that you may have opinions counter to the regime in the future or may associate with people hostile to the regime can lead you to imprisonment for the Orwellian crime of "predilection to social dangerousness."

Despite the "legal" apparatus the dictatorship uses "extra-legal" measures organizing mobs to assault non-violent activists peacefully exercising their rights. In recent years women have been brutally targeted by these regime agents. Afterwards adequate medical care has been sketchy at best.

Extrajudicial killings were a common practice beginning in 1959. Brutal examples continue to the present day such as the July 13, 1994 "13 de Marzo" tugboat massacre that claimed the lives of scores of men, women and children and the February 24, 1996 Brothers to the Rescue shoot down that murdered four human rights defenders.  ( Also bears mentioning that on the eve and day of this attack the American diplomat Robin Meyers was sideswiped by cars driven by Cuban state security agents on a number of occasion over February 23 and 24th.)

Since 2006 when Fidel Castro became sick and turned power over to his brother Raul, a new and disturbing pattern emerged. In the past activists would occasionally disappear or their bodies would appear under mysterious circumstances.  Manuel Acosta Larena, an activist in the Democracy Movement, died under suspicious circumstances while in detention on June 24, 2007 and appears to have been a victim of police brutality. Miguel Valdés Tamayo was part of the group of the 75 arrested in March of 2003 released in 2004 for health reasons Cuban State Security began a campaign of harassment that led to his premature death on January 10, 2007. October 7, 2006, independent journalist and librarian Hector Riverón Gonzalez, 48, found dead near a taxi at the taxi stand in the City of Las Tunas. His body was found dead under a tree, with his shoes clean and dry although it had rained all night, and handcuff marks. The journalist had been threatened with death several times by State Security. Other cases involving suspicious deaths are those of Omar Darío Pérez Hernández, of Camagüey, Cuba and Idania García Quesada, a dentist from Las Tunas, Cuba. Forced to flee the country it is believed that they were killed by State Security in 2003 and 2004 respectively.

This leads to the question: Why does the Castro regime hate and fear opposition and dissident leaders such as Oswaldo Payá Sardiñas and Laura Inés Pollán Toledo? Both were nonviolent and advocated political dialogue


Oswaldo Payá Sardiñas interview in January of 2003 (in Spanish)

Oswaldo Payá left Cuba in late 2002 to collect the Sakharov Prize awarded to him by the European Union where he gave an important speech on December 17, 2002 in which he outlined an important first victory of the opposition:


“The first victory we can claim is that our hearts are free of hatred. Hence we say to those who persecute us and who try to dominate us: ‘You are my brother. I do not hate you, but you are not going to dominate me by fear. I do not wish to impose my truth, nor do I wish you to impose yours on me. We are going to seek the truth together.’”

Laura Pollán became a dissident when her husband was imprisoned during the Black Cuban Spring of 2003 along with more than 75 others. She was one of the founders of the Ladies in White and challenged the dictatorship on the streets of Cuba. Following brutal repression in an effort to prevent them from marching through the streets of Havana Laura Pollan demonstrated states: "We will never give up our protest. The authorities have three options — free our husbands, imprison us or kill us.

Refusing to be afraid and refusing to hate one's adversaries creates a dynamic of liberation that is a mortal threat to these type of totalitarian regimes. It leads others to lose their fear and those who have aided the regime in the past are more likely to join opposition ranks knowing that they will be treated in a just not vengeful manner. This is why the dictatorship, even in death, hates them and tries to destroy their memory.

This combined with a reduction in concerted international solidarity efforts over the past four years has led to a new and disturbing pattern. The regime is now able to act on its hatred of high profile activists.

Beginning on February 23, 2010 higher profile figures such as prisoner of conscience Orlando Zapata Tamayo tortured and denied water while on hunger strike died. On January 31, 2011 Mercedez Talavera López died after being run over by a car in the city of Cárdenas in Matanzas. This was followed by the death of  human rights defender Juan Wilfredo Soto Garcia on May 8, 2011 just three days after a brutal beating by regime agents. The suspicious deaths of Laura Pollan on October 14, 2011 by a mysterious illness combined with what an independent doctor described as "purposeful medical neglect", of prisoner of conscience Wilman Villar Mendoza on January 20, 2012 while on hunger strike and now Oswaldo Payá on July 22, 2012 in a "car accident" less than two weeks after another car was launched at him points to a new and troubling trend of high profile victims.

The nonviolent end of communism in Eastern Europe and the Soviet Union was carefully studied by the Castro regime. It appears that their strategy is to eliminate the Cuban Vaclav Havel's and Aung San Suu Kyi's in order to preserve power or guarantee a bloody finish to their system.

Laura and Oswaldo were both inspired by Mohandas Gandhi who advocated using truth as an anvil and nonviolence as a hammer to see if it stands the test. Ofelia Acevedo, the widow of Oswaldo Payá, founder and new leader of the Christian Liberation Movement demands the opening of a transparent investigation conducted by an international organization whose sole purpose is the pursuit of truth.

Achieving this objective and getting at the truth of what happened will break the culture of impunity practiced by the Castro regime that has all too often gotten away with murder in Cuba. This will also hasten the establishment of a new pattern of liberation and the respect for human rights that both Laura Pollan, Oswaldo Payá and these other activists struggled and died for. 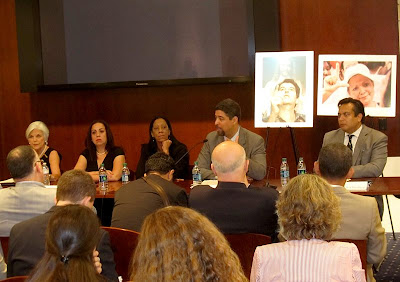