Venezuela's slide into totalitarianism and the democratic resistance
April 1, 2014 in Venezuela was no joking matter. Two events on the same day demonstrated the human rights challenges facing the South American country:  release of the Amnesty International report on Venezuela and María Corina Machado's nonviolent rally to demand admittance to the National Assembly where she is a member duly elected by the Venezuelan people.


Beginning in Madrid in the late morning, Amnesty International released its report on the human rights crisis in Venezuela titled: Venezuela: Human Rights at risk amid protests and during the presentation of the report a number of tweets by the authors and researchers highlighted the situation.


"Esteban Beltrán, provides data on arrests, deaths and wounded in protests in recent weeks in Venezuela."
"Nuria García talks about field research and emphasizes that there are victims who fear speaking in Venezuela."
From Amnesty Spain: "We're concerned, by among other things, threat in residential neighborhoods, using rubber bullets and the abuse of detainees.
From Amnesty Spain: We have received dozens of complaints from people who have been ill-treated in detention.

Hours later in Caracas,  María Corina Machado met supporters at a  peaceful rally and march to defend her seat in the National Assembly. Daniel Lozano of El Mundo Caracas described what happened:


"The Bolivarian Police took advantage of the speeches by the politicians, surrounding the demonstration stealthily. At the end, they did not hesitate one second to launch the famous 'good gas'. "Strong repression", complaied the Metropolitan Mayor Antonio Ledezma, one of the closest allies of Machado. "They are desperate to see that they can not intimidate the brave people in the streets and repressed a peaceful demonstration," he added. Machado, accompanied by several opposition MPs and still suffering the effects of gas boarded a group of motorcycles and sped off towards the Assembly. On the stage small battle groups of people recovered from the effects of the gas. Students took to the streets to another area of ​​the city, ready to protest the umpteenth police crackdown  as violent as ever."

María Corina Machado was removed from office for having addressed the Organization of American States on the human rights crisis in Venezuela. Due to maneuvers of the Venezuelan government she was blocked from speaking and the government of Panama credentialed her to speak. The Chavista's used this as the basis to remove her from office in a manner that is unconstitutional and that was upheld by the Chavista packed Supreme Court. Venezuelans are being shot in the head, killed by snipers, for participating in nonviolent protests.  It appears that these killings are being carried out by government agents. Others have been tortured. Their is reason to this brutality and it did not appear out of the blue.

However, what is being witnessed in Venezuela today did not begin with the Maduro regime but started over 15 years ago on February 2, 1999 with the start of the presidency of the late Hugo Chavez. Human Rights Watch in 2004 released a report: Rigging the Rule of Law that was subtitled Judicial Independence Under Siege in Venezuela and warned of the government simultaneously packing the Supreme Court with pro-Chavez judges while at the same time purging those critical of the government. On the tenth anniversary of Chavez's 1998 electoral victory Human Rights Watch took a look back over the first decade in power and had this to say about the judiciary:


In 2004, displeased with a series of controversial judicial rulings, the president and his supporters in the National Assembly launched a political takeover of the Supreme Court. They enacted a new law expanding the court from 20 to 32 members. Since the law allowed the legislature to select new members by simple majority vote, this meant the governing coalition was able to use its then slim majority in the National Assembly to obtain an overwhelming majority of seats on the court. (At the time the court was believed to be evenly divided between Chávez allies and critics.) The law also gave the National Assembly the power to remove justices from the bench with a simple majority vote rather than the two-thirds majority required by the 1999 Constitution. The law, in short, made it possible for the governing coalition to both pack and purge the country's highest court. ... Within weeks of the law's enactment, the three Supreme Court justices responsible for the rulings that had most angered the Chávez camp were gone from the bench. In December 2004 the governing coalition in the National Assembly filled their vacancies, as well as the 12 new seats, with political allies. Over the next few years, this packed Supreme Court fired hundreds of lower court judges and appointed hundreds more to permanent judgeships.

The political takeover of the Supreme Court effectively neutralized the judiciary as an independent branch of government. The packed court has largely abdicated its role as a check on arbitrary state action. When the Chávez government has pursued measures that undermine human rights protections, the court's response has typically been one of passivity and acquiescence. It has failed, in particular, to counter assaults on the separation of powers, such as the 2004 court-packing law and, more recently, a 2007 constitutional reform package. It has also failed to safeguard fundamental rights in prominent cases involving the media and organized labor.

The concentration of power and its abuse did not end there. In a 2012 report by Human Rights Watch titled Tightening the Grip Concentration and Abuse of Power in Chávez's Venezuela it had a section on the judiciary which described how judges view themselves:


In recent years, justices on the packed Supreme Court have openly rejected the notion of the judiciary as an independent branch of government. Instead of serving as a check on arbitrary state action, they have espoused the view that the role of the country’s courts is to support the political agenda of President Chávez.
For example, at the public ceremony initiating judicial activities for 2011, the keynote speaker, Justice Fernando Torre Alba, declared that the judiciary has the duty to participate in the effective implementation of the government’s public policy to develop “a deliberate and planned action to carry out a Bolivarian and democratic socialism” and that the courts “must severely…sanction behaviors or correct judicial cases that undermine the construction of [this] Socialism.”[18]
Later that year, Supreme Court President Luisa Estella Morales declared publicly that President Chávez’s “direction, inspiration, and conception of the Republic is what constitutionally inspires…our activities.” Addressing the president—whom she referred to as “our leader”—she said: “Here are all your institutions, and we are firmly moving forward with the responsibilities that you have given us, which we will never betray, not now, not ever.”[19]
More recently, in May 2012, while addressing newly appointed judges at their swearing-in ceremony, the Supreme Court president exhorted them to understand their role as adjudicators in terms of “our revolutionary project and of the change that is taking place in Venezuela today.”[20]

The remaining question of what would happen to a judge that maintained the view that the judiciary was independent and should make decisions based on the law and not on the arbitrary decisions of the executive was demonstrated in the case of Judge María Lourdes Afiuni:


Judge Afiuni was detained on December 10, 2009, the day she authorized the conditional liberty of Eligio Cedeño, a banker accused of corruption, on the basis that he had been in pretrial detention for almost 3 years, despite the 2-year limit prescribed by Venezuelan law. The UN Working Group on Arbitrary Detentions had declared Cedeño’s detention “arbitrary.” The authorities accused Afiuni of corruption, abuse of authority, and “favoring evasion of justice.” On December 11, President Hugo Chávez said Afiuni was a “bandit” and should be sentenced to 30 years in prison. Cedeño fled Venezuela and requested political asylum in United States a few days later.

In September of 2013, The International Commission of Jurists (ICJ) and Human Rights Watch  issued a joint statement which outlined the rest of her plight:


A few days later, [Chávez] said she was “correctly jailed” and reiterated that she should be given a maximum sentence, adding that he “would give her 35 years.”In January 2010, prosecutors charged Judge Afiuni with corruption, abuse of authority, and “favoring evasion of justice.” Prosecutors provided no credible evidence to substantiate the charges. Judge Afiuni was held in prison for over a year, before being transferred to house arrest.During her detention, Judge Afiuni was raped and suffered physical and psychological violence, including death threats from other inmates.In June 2013, Judge Afiuni was released on bail, while her trial, which began in 2012, continues. We recall that the UN Basic Principles on the Independence of the Judiciary prohibit inappropriate or unwarranted interferences with the judicial function, including through reprisals such as those perpetrated against Judge Afiuni.

Where the judiciary is subordinated and controlled by the executive branch one of the main pillars of a democracy: the rule of law has been removed. In 2014 the end result of the weakening of Venezuela's democratic institutions has reached the point that it is at a tipping point into a totalitarian dictatorship.  Freedom of the press has been curtailed and government institutions that should be independent are all centralized in the executive. The democratic resistance has only one outlet to demonstrate its opposition in Venezuela and that is to take to the streets demanding that its rights are respected. The response of the Maduro regime with their Cuban advisors is to try to terrorize nonviolent protesters with violence, killings and torture. Imprisoning nonviolent opposition leaders such as Leopoldo Lopez has failed to shutdown the nonviolent demonstrations. From behind bars Leopoldo has been able to call thousands to the street in defiant and nonviolent protest. 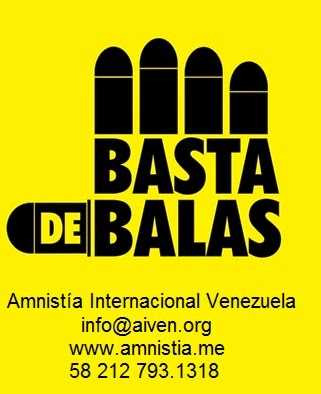 Today's response by María Corina Machado and thousands of her supporters to nonviolently stare down the regime's repressive forces maintaining their nonviolent discipline following a gas and rubber bullet attack by the regime to prevent a march to the National Assembly demonstrates a movement that poses an existential threat to a totalitarian regime: nonviolent resistance backed up with moral authority has been shown to be part of the equation of ridding a country of a totalitarian regime. Corina Machado's moral stand rings out over twitter:

In Plaza Brión: "We demand the the Attorney General's resignation, we demand real Electoral Authority."

In Plaza Brión:"We will not give up, because our struggle is for human dignity."

In Plaza Brión: "My job as your Member of the National Assembly I have done in the streets with you and I will continue there until we overcome."