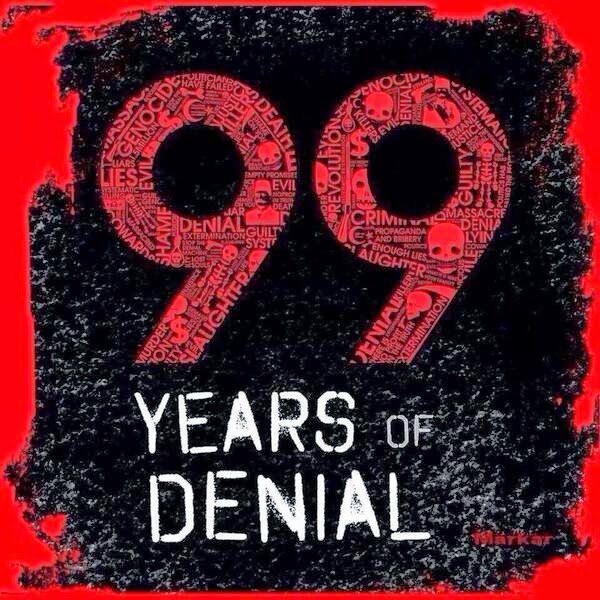 Cengiz Aktar is Senior Scholar at Istanbul Policy Center and today in Al Jazeera reported that  April 24, 1915 was the day when the decision to eliminate Armenians from Anatolia began to be implemented by the Ottoman government of Young Turks. This would eventually become known as the Armenian Genocide. The failure of the international community to condemn this crime encouraged others to repeat the crime on a greater scale afterwards.  On August 22, 1939, Adolf Hitler in a speech to his Wehrmacht commanders at his Obersalzberg home cited the events in Armenia to rationalize committing a new genocide:


"I have given the order – and will have everyone shot who utters but one word of criticism – that the aim of this war does not consist in reaching certain designated [geographical] lines, but in the enemies' physical elimination. Thus, for the time being only in the east, I put ready my Death's Head units, with the order to kill without pity or mercy all men, women, and children of the Polish race or language. Only thus will we gain the living space that we need. Who still talks nowadays of the extermination of the Armenians?"

Ninety nine years later the world is talking about the extermination of the Armenians and other victims of man's inhumanity to man. Below is "The River Ran Red," the 2009 documentary by Michael Hagopian on the Armenian genocide.


Human Rights defender Oswaldo José Payá Sardiñas in December of 2002 observed that "The cause of human rights is a single cause, just as the people of the world are a single people. The talk today is of globalization, but we must state that unless there is global solidarity, not only human rights but also the right to remain human will be jeopardized."In the same address he continued stating that "If there is no solidarity between people we will be unable to preserve a fair world in which it is possible to continue living as human beings. I therefore humbly believe that rather than new models, both for societies and for relations between countries, what we need is a new spirit."

Let us hope that emerging international solidarity and remembrance of these past crimes will prevent new crimes in the future.