The theme of the 2015 Oslo Freedom Forum is "Living in Truth" in tribute to the late Czech dissident-turned-president Václav Havel.  Living in truth as both a dissident and later as a head of state while defending and embracing human rights no matter how remote the chances for success are the reasons why many continue to celebrate the life of Václav Havel and mourn his passing from the world stage. At the same time it is important to remember some of those who had an impact on developing this powerful idea.

Erazim V. Kohák in his book Jan Patočka: philosophy and selected writings delves into the writings of one such individual. Jan Patočka was the Czech philosopher and Charter 77 member who influenced Havel's approach to the questions surrounding the challenge of reconciling a personal moral order with an objective moral order that transcends individual subjectivity. Backing up his teaching with action, he was also Charter 77's first casualty dying under prolonged interrogations over a two month period. Kohák refers to Patočka’s “solidarity of the shaken” as a community freed “from the preoccupation with the pursuits of peace and prosperity that inevitably lead to war and turn it instead to the pursuit of the Good, the care of the soul” that is “living with a clear conscience, living in truth, or in far older terms, seeking first the Kingdom of God.”

Oslo Freedom Forum has asked the question: "Living in Truth, what does it mean to you?" This is my answer as of today, and subject to amendment. Living in truth is doing and saying what you believe is true no matter the cost. While at the same time recognizing that one does not know the whole truth and that there is an objective truth that exists outside of each one of us but can be arrived at with a combination of humility and engagement with others. When this is combined with nonviolence it can become a powerful and often unstoppable force that can topple dictatorships.

A more succinct and powerful summary was made by Janie Hsieh, PhD over twitter: "For me it's about acting in the service of Truth." Below is a statement released by Oslo Freedom Forum with some slight tweaking following the first day of talks. Please watch the live stream.

The energy in the room is high and we’re ready to hear from activists, dissidents, business leaders, members of the media, policymakers, and technologists who are promoting individual rights across the globe.

Today’s speakers will cover a range of ideas: how individual people can force repressive governments to crumble, the evolving role communications and technology play in advancing human rights, stories of challenging arbitrary power and corruption, and the absolute need for freedom of expression – even when it offends others. 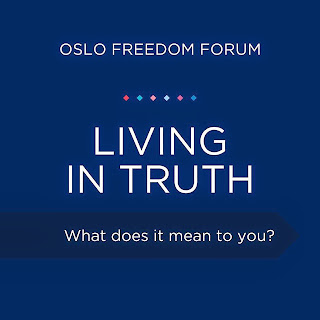 Former president of Ukraine Viktor Yushchenko will open the second day of talks on May 27. Other speakers include Moroccan writer, filmmaker, and gay rights advocate Abdellah Taia, Gabonese environmentalist Marc Ona Essangui, Stanford professor Larry Diamond, and Turkish journalist Mustafa Akyol. After lunch, attendees and those watching the livestream will get the chance to participate in an interactive on-stage discussion with a panel of OFF speakers by submitting questions via Twitter to @OsloFF or by emailing questions@oslofreedomforum.com.
Posted by John Suarez at 5:52 AM