February 24, 2016 will mark 20 years since two civilian planes were shot down over international airspace on the orders of the Castro brothers in Cuba. At Florida International University, students, members of the university community, and the families of the four men killed (Carlos Costa, Armando Alejandre Jr., Mario de la Peña, and Pablo Morales) will begin to gather at the main fountain at 3:00pm to hold a silent vigil from 3:21pm to 3:27pm the time that the two planes were destroyed.

Two teach-ins on what happened that afternoon and the aftermath will be examined over the next week and both will be in Spanish. The first will be on February 18, 2016 at the West Dade Regional Library in an event with the four families of the men killed. The second will be at Florida International University on February 25, 2016 with Jose Basulto one of the survivors of the events of that day. 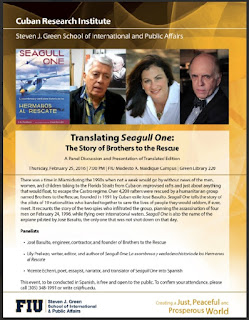 On February 25 at 7pm a panel discussion and presentation of the Translated Edition of “Seagull One: The Story of Brothers to the Rescue” will take place with panelists: Lily Prellezo, author of the book “Seagull One: La asombrosa y verdadera historia de los hermanos al Rescate”, José Basulto, founder of Brothers to the Rescue, and Vicente Echerri, translator of Seagull One into Spanish. The event will be in FIU’s Green Library, room 220 (GL220). To RSVP please call (305)348-1991 or simply respond to this message.

Both events are free and open to the public.

Ten years ago the Free Cuba Foundation organized a panel discussion on the Brothers to the Rescue shoot down in an event moderated with Neri Ann Martinez. Below is the video taken from 2006 event.