Brothers to the Rescue and the Shootdown Conspiracy 20 years later

"Only through non violent means can we cleanse the Cuban nation from the hatred instilled by the dictatorship in Cuban hearts. The nonviolent methods have proven to be the most effective and humanitarian means of resistance against Castro's totalitarian state." - Jose Basulto, Our Struggle, March 2, 1996
Twenty years have passed since the Brothers to the Rescue shoot down, but the regime that ordered this act of state terrorism remains in power and continues to behave in a criminal fashion murdering nonviolent dissidents and smuggling weapons to outlaw regimes such as North Korea. At the same time, it is important to remember the significance of the Brothers to the Rescue organization, the four lives lost that day and the struggle still being carried out by their families for justice and reconciliation.


How and why Brothers to the Rescue formed
In February of 1991 news accounts of the death by dehydration of 15-year-old Gregorio Perez Ricardo, a rafter fleeing Cuba, as U.S. Coast Guard officials tried to save his life shocked the moral imagination of several pilots. This was not an isolated event. Academics Holly Ackerman and Juan Clark, in the 1995 monograph The Cuban Balseros: Voyage of Uncertainty reported that “as many as 100,000 Cuban rafters may have perished trying to leave Cuba.” Anecdotal evidence documents that some of them were victims of the Cuban border patrol using sand bags and snipers against defenseless rafters.

Brothers to the Rescue by November of 1995 was collaborating with the Florida Martin Luther King Institute for Non-violence and took part in the King Day parade in 1996. On February 8, 1996 The Miami Times reported “that this group has come around to the belief that change can be brought about in Cuba in the same way that it was brought about by Dr. King in the United States.” The Miami Times concluded in the editorial “Spreading King’s Message” that “In throwing Dr. King's principle into the volatile mix of Cuban exile politics, Brothers to the Rescue is showing a willingness to be creative.”


Why the Castro brothers wanted to destroy Brothers to the Rescue
They risked their lives in the Florida Straits to rescue Cuban rafters and at the same time Brothers to the Rescue challenged the Cuban exile community to abandon both the failed violent resistance and appeasement approaches in order to embrace strategic nonviolence.  This path followed the way of Martin Luther King Jr. with both civil disobedience and a constructive program. What was the end result? Brothers to the Rescue saved more than 4,200 men, women, and children ranging from a five-day old infant to a 79 year old man, and rescued thousands more during the 1994 refugee crisis.

One year after the July 13, 1994 tugboat massacre in which 37 men, women and children were killed Cuban exiles organized a flotilla to travel in a civic non-violent manner to the spot six miles off the Havana coastline where the "13 de Marzo" tugboat had been attacked and sunk to hold a religious service for the victims. The Brothers to the Rescue overflight of Havana, where they dropped bumper stickers in Spanish that read "Comrades No. Brothers" was in response to Cuban gunboats ramming the lead boat of the flotilla.

Brothers to the Rescue also served as a bridge between a nonviolent civic movement inside of Cuba and an exile community seeking a different approach. Cuban dissidents announced on October 10, 1995 the intention to hold a national gathering of the opposition in Cuba on February 24, 1996. The coalition of over a 160 groups named themselves the Cuban Council. Brothers to the Rescue in an open and transparent manner sent $2,000 of privately raised assistance to this coalition on February 13, 1996. In the days leading up to February 24 over a 180 dissidents were imprisoned in a nationwide crackdown.

The events surrounding the February 24, 1996 Brothers to the Rescue shoot down began weeks in advance with the dictatorship planning out the shoot down and using its spy networks to obtain information to carry out this act of state terrorism while blaming the victims in the media coverage. It was a conspiracy to destroy Brothers to the Rescue while at the same time taking attention away from a crack down on a national gathering of the democratic opposition in Cuba. This was taking place in the midst of a profound crisis for the Castro regime following the collapse of the Soviet empire in 1991 and a warming relationship in 1994 between the Clinton administration and the Cuban dictatorship that included secret joint military exercises. However, none of this changed the brutal nature of the Cuban dictatorship in how it dealt with Cubans on the island or the continuing hostility of the Castro regime for the United States.

Castro brothers planned out the February 24, 1996 shoot down
Two Cuban intelligence agents infiltrated Brothers to the Rescue, providing information to the Castro regime on the group, disinformation to the FBI, and their Cuban spy ring leader, Gerardo Hernandez warned the two infiltrated agents not to fly during a four-day period that included the day of the premeditated attack. Six days before the attack a Cuban pilot saw Cuban MiGs rehearsing the shoot down. 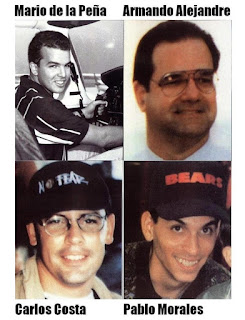 On February 24, 1996 at 3:21pm and 3:27pm two Brothers to the Rescue planes were shot down by two Cuban MiGs over international airspace killing four. Two more MIG’s chased a third plane to within three minutes of downtown Key West, but that plane made it back and provided critical information on what had occurred.

Within moments of the shootdown, allegations were immediately generated that Brothers to the Rescue had involved itself in "paramilitary activities against the government of the Republic of Cuba." Juan Pablo Roque, who had defected the day before, and arrived in Cuba through Mexico, claimed that they had been planning to introduce anti-personnel weapons to blow up high-tension plants. This cover story collapsed when the third plane returned to Key West.
The four men who were killed represented all aspects of the Cuban diaspora: Armando Alejandre Jr, a child who arrived with his parents from Cuba in 1960, Carlos Costa, born in Miami Beach in 1966 and Mario Manuel de la Peña, born in New Jersey in 1971 the children of Cuban exiles. Pablo Morales was born in Cuba in 1966, raised there and was saved by Brothers to the Rescue when he was 26 years old while fleeing the island on a raft. Two were from Havana, one was from New Jersey and the other from Miami Beach.

Defense Intelligence Agency analyst Ana Belen Montes facilitated a meeting between U.S. government officials and retired U.S. Navy admiral Eugene Carroll on February 23, 1996 to relay recent threats by the regime that provided Admiral Carroll a lot of television interview time on February 25 to place the Cuban government in a more favorable light and place the blame for the shoot down on the victims. U.S. counterintelligence officer Scott W. Carmichael in his book True Believer describes how they thought this was an "influence operation" - a covert attempt to influence public opinion. Her behavior raised questions that led to Montes being uncovered as a high ranking Cuban mole in the heart of the Pentagon in 2001.
The Castro regime targeted Brothers to the Rescue for slander, infiltration, sabotage and extrajudicial execution on February 24, 1996 because it viewed the organization’s nonviolent approach as an existential threat to the dictatorship.
The Brothers to the Rescue shoot down case in the U.S. courts
U.S. courts found the Cuban government guilty of premeditation in the February 24, 1996 shoot down. Family members of the four men have over the past twenty years pursued and continue to pursue justice. They have had concrete results.
There has been a lack of political will on behalf of the The White House to pursue justice in the premeditated, extrajudicial murders of these four men. The Obama administration commuted the double life sentence of Gerardo Hernandez, the one man actually imprisoned for conspiracy to commit murder in the Brothers to the Rescue shoot down on December 17, 2014 setting him free and returning him to Cuba. Nevertheless, the families of Armando, Mario, Carlos and Pablo continue their struggle for memory, truth, and justice on behalf of their loved ones. This means “the indictments of the military officials involved, from Raul Castro, Minister of the Armed Forces, down the military chain of command” and documenting what happened.