Cuba in 2015 was the tenth country in the world with most serious violations of artistic freedom reports Danish NGO Freemuse, February 22, 2016. 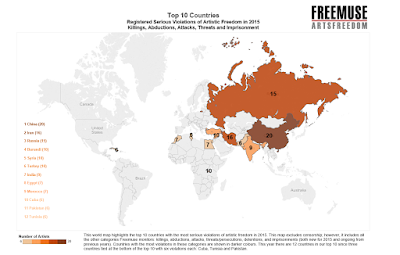 CUBA — WITHIN THE REVOLUTION EVERYTHING IS PERMITTED

Cuba remains a classic dictatorship. The Cuban Constitution allows freedom of speech and press, as long as it follows the purposes of the socialist society as understood by the Cuban government. The Cuban government has gained a reputation for its limited tolerance for public criticism, and the Communist Party is mandated to give prior approval for printing almost all publications and to censor public screenings and artistic performances.


Freemuse in 2015 documented 21 cases of violations on artistic freedom of expression in Cuba, including imprisoning one artist and keeping two in prison, detaining two artists and prosecuting another.

Throughout 2015 the Asamblea Nacional del Poder Popular, the legislative parliament of Cuba, announced a “recommendation” of restricting free public spaces from vulgarity and the denigration of women in order to stop foreign influence contrary to Cuban values. The assembly also “advised” comedians to avoid “irresponsible humour”. The Cuban Institute of Radio and Television (ICRT), a state monopoly, amplified this statement. The president of the ICRT, Danilo Sirio, emphasized that “under no circumstances will artistic content that denigrates women, or incites vulgarity, obscenity or offensiveness, or what is contrary to the Cuban values will be broadcasted”. Sirio also suggested that some materials, such as foreign television series, should be accompanied by comments from a Cuban specialist.

RAP & HIP-HOP AS DISSENT
On 28 January 2015, rapper Maikel Oksobo “El Dkano” (real name Maikel Castillo Pérez) was sentenced to one year in prison in Havana. It is generally believed he was targeted for having used his music to express dissenting political opinions. El Dkano was sentenced under a charge known as the “peligrosidad predelictiva”, translated as “dangerousness that is likely to lead a crime”, which is used to imprison dissidents for longer periods.

In April 2015 a group of Cuban hip-hop artists were expelled from the Cuban Rap Agency (ACR). In an open letter sent out on 28 June2015, the group denounced Minister of Culture Julián González Toledo for deteriorating Cuban hip-hop both inside and outside the country. The group also said that the Cuban Institute of Music made “promises that never came true”, and that Cuban hip-hop is being censored more than ever. Some of the artists stated that the real reason of their expulsion was their participation in Panama in the Summit of the Americas, a set of international summits organized by the Organization of the American States bringing together leaders of countries in the Americas. The hip-hop artists who participated in the summit were Soandry, Hermanos de Causa, Renovación Urbana, Maikel y El Fonky, La Alianza, Raudel Escuadrón Patriota, Ruta 11, Bárbaro el Urbano, Charly Mucha Rima, Cuentas Claras, Carlitos P and P, Yimi con Klase, and Onda Libre. 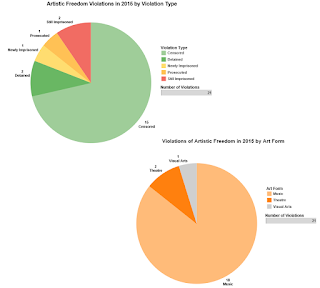 PASSPORT RETURNED TO BRUGUERA
US-based performance artist Tania Bruguera was not allowed to leave Cuba during the first six months of 2015. The artist was first detained in December 2014 after trying to stage a work entitled ‘Tatlin’s whisper #6’, in Havana’s Revolution Square. Bruguera was harassed several times in 2015, and was also detained for a few hours in May 2015 after reading passages from Hannah Arendt’s ‘The Origins of Totalitarianism’ outside her home in Havana. Cuban authorities didn’t file formal charges, but Bruguera had her passport confiscated. In mid-July 2015 authorities returned her passport.

In October 2015, graffiti artist and activist Danilo Maldonado Machado, El Sexto, was released after being detained for 10 months. The artist was first detained in December 2014 after police officers found a drawing of two pigs named Fidel and Raul that the artist was planning to use in a performance. Authorities explained to the artist’s family that El Sexto was detained because they considered him “counter-revolutionary”. During this period the artist didn’t face any trial or sentence.

Gorki Águila, leader of the band Porno Para Ricardo, has never had an easy relationship with Cuban authorities. A controversial figure, Gorki has been arrested or detained many times during the past 15 years; sometimes because of his role as an activist, sometimes because of his artistic work, and sometimes due to the combination of both his art and activism — or “artyvism” as some call it. 2015 was no exception for Gorki. On 23 May Gorki was arrested outside Havana’s Museum of Fine Arts by Cuban authorities after carrying a banner with the image of the graffiti artist El Sexto and the word “libertad” (freedom) on it. Gorki was incarcerated for 23 hours and said police physically attacked him while in their custody.

In July, Gorki dedicated a song to the Damas de Blanco (Women in White), a citizen movement that gathers wives and relatives of political prisoners. Gorki declared that “it seems that the Cuban government planned to dismantle the Damas de Blanco with intimidation and violence, but what the governmental interference did was to only unite them even more”.

On 5 August 2015, some weeks after his presentation, officers of State Security waited for Gorki outside his home and detained him again for a couple of hours. A State Security officer warned him that, if he continued to attend opposition meetings, the government could restrict his travels to other countries. However, Gorki stated that the State is “violating every right, one after another: the right to pacific protest, to freedom of speech, to travel, and that the detentions in the island are totally arbitrary”.

On 7 November 2015, Gorki was again detained, along with two journalists from tv channel France 24, for several hours in Havana. The musician and the two journalists were brought to the Playa Municipality police station, where Gorki made a phone call to digital independent media outlet 14ymedio, and reported the situation. After hours of detention, all three were set free without charges.

In November 2015, Cuban authorities suspended theatre director and filmmaker Juan Carlos Cremata’s permission to work following the ban of his theatre play ‘El Rey se Muere’ (The King is Dying). Later, in December, Cremata wrote in his BBC-syndicated blog that Cuban authorities tried to expel Eliecer Ávila, an opponent of the Castro regime, from a meeting about Cuban cinema at the Cultural Center Fresa y Chocolate. According to Cremata, officials were spying on the event for a while before discretely trying to take Ávila away from the crowd. When people at the event asked for an explanation, officers just said that the event was “meant to be for film makers and revolutionaries only”. The day after, the Cuban Institute of Art and Cinematographic Industry (ICAIC) defended the position of the officials in a letter, stating that: “there can’t be place in our forums for those who are enemies of the Revolution”.