The Obama administration talks the talk but doesn't walk the walk on human rights in Cuba.

The State Department Spokesperson John Kirby at the Daily Press Briefing in Washington, DC on March 4, 2016 made the following remarkable statement that contradicts the actions of the Obama administration on Cuba since December 17, 2014.

"On human rights, there’s no question that we continue to have concerns about the human rights issue in Cuba, and we’ve been very candid and frank about that, publicly and privately. There still remains concerns that we have about it. [...] So we’re still going to highlight it as an issue of concern; we’re still going to talk about it; we’re still going to raise our concerns with Cuban officials about it going forward. Because that’s what you do when you are working towards the full normalization of diplomatic relations in a country like Cuba."

The above rhetoric does not match up with the actions of the State Department and the Obama administration and here are a few high profile examples since December 17, 2014:

1. President Obama's announcement that he and the First Lady would be traveling to Cuba for a two-day visit beginning on March 21st to meet with "President Raul Castro" was not a step forward but a huge step backward to the days when U.S. presidents embraced and legitimized Latin American military despots.

2. Secretary of State John Kerry did not invite Cuban human rights defenders to the flag raising ceremony at the U.S. Embassy in Havana on August 14, 2015. The State Department argued that it was a government to government affair and that there was not enough space to accommodate the dissidents. and journalist Andres Oppenheimer laid it out: "Kerry’s trip to Havana didn’t break new ground on human rights even symbolically, and in effect hurt Cuba’s fledgling internal opposition by making it look irrelevant in the eyes of many Cubans."

3. On July 27, 2015 the State Department's human trafficking report was watered down for political aims including ignoring the severity of sex trafficking in Cuba and the use of slave labor by the Castro regime. Major League Baseball is now floating a proposal that would make it a partner of the dictatorship in exploiting baseball players. Politicizing the report undermines the credibility of the United States on human rights around the world.

4. On July 20, 2015 at the State Department, Rosa Maria Payá Acevedo attended a press conference with Secretary of State John Kerry and Castro's foreign minister Bruno Rodriguez. Rosa Maria had proper accreditation as a member of the press. Rear Admiral John Kirby,  the State Department spokesman, took Rosa Maria aside and warned her that she would be physically removed if she asked any questions or caused any kind of disturbance. This was most likely done to appease the Castro regime's foreign minister.

5. Releasing Castro spies on December 17, 2014 serving life prison sentences, including one of them imprisoned for conspiracy to murder three U.S. citizens and one permanent resident. Two days later in a press conference, President Obama described the premeditated act of state terrorism carried out on Fidel and Raul Castro's orders on February 24, 1996 as a "tragic circumstance" while ignoring the open indictments on members of the Cuban military directly involved in the shoot down by U.S. courts. These actions encourage impunity and does not prioritize human rights. 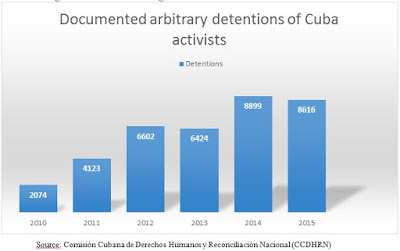 The reality is that human rights in Cuba is not a priority for the Obama administration, but rather lifting the economic embargo and having a photo-op in Cuba later this month for his Presidential library. Truly hope I'm wrong but the record over the past seven years says otherwise.