Now Elie Wiesel’s aphorism: "For the dead and the living we must bear witness" has a new and somber relevance as this author, philosopher, humanist and holocaust survivor passed away today. During his life he lived in action what he had stated during his 1986 Nobel Lecture: "There may be times when we are powerless to prevent injustice, but there must never be a time when we fail to protest." 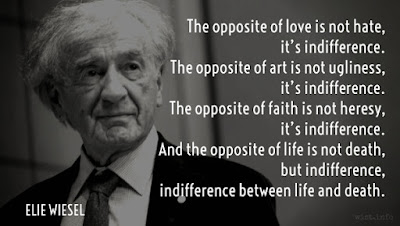 As a holocaust survivor Elie Wiesel understood the perils of indifference and wrote: "What is indifference? Etymologically, the word means "no difference." A strange and unnatural state in which the lines blur between light and darkness, dusk and dawn, crime and punishment, cruelty and compassion, good and evil."

In his 1986 Nobel Acceptance speech Elie Wiesel issued a challenge to people everywhere challenging us all when he said: "I swore never to be silent whenever and wherever human beings endure suffering and humiliation. We must always take sides. Neutrality helps the oppressor, never the victim. Silence encourages the tormentor, never the tormented."

At a time when many are silent on the horrors taking place in Cuba this human rights icon spoke out and took action. Earlier this year Elie Wiesel spoke out about a former Cuban prisoner of conscience declaring, “I have known Armando Valladares for many, many years. And he is a very good person, an honest fighter for peace and for justice. I think he has something heroic about him.” He presented a tribute to Valladares at the Canterbury Medal Dinner on May 12, 2016. Valladares was arrested and imprisoned at the age of 23 in Cuba for refusing to display a placard on his desk that said: “I am with Fidel.”


Never had the honor of meeting Elie Wiesel but was deeply impacted by his writings and an initiative that he began, Forum 2000, with Václav Havel and Yohei Sasakawa, in 1997 that over the past 19 years has made a unique contribution to facilitating a wide ranging global dialogue on many different issues, with different voices that would normally not meet, set in the Czech Republic at the heart of Europe and with a tragic history in the 20th century of which Elie Wiesel had been a part.  Wiesel's part in this history is vividly documented in his book Night where he wrote of his experiences as a prisoner in the Auschwitz, Buna, and Buchenwald concentration camps during the holocaust.

His good works will continue to impact positively for generations to come.

Thank you for bearing witness and always speaking out against injustice.

May peace be upon him.