Black Ribbon Day 2016 and the Struggle Against Forgetting


Today, we honour the victims and survivors of Communism and Nazism in Europe, and all those around the world who continue to endure and fight against the oppression of totalitarian regimes. Black Ribbon Day marks the anniversary of the Molotov-Ribbentrop Pact. This pact, signed in 1939 between the Soviet Union and Nazi Germany, allowed for the illegal political and territorial rearrangement of Eastern and Central Europe.

The Molotov–Ribbentrop Pact, named after Soviet foreign minister Vyacheslav Molotov and Nazi German foreign minister Joachim von Ribbentrop, officially called the Treaty of Non-aggression between Germany and the Union of Soviet Socialist Republics was signed 77 years ago today. Made public on August 23, 1939 the Molotov Ribbentrop Pact was a Nazi-Soviet Non-Aggression Pact with secret protocols setting out how the two regimes would divide Poland and the Baltic States. 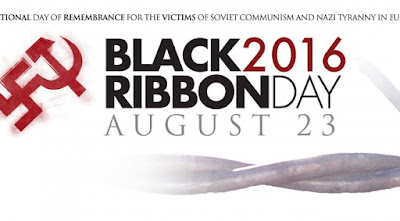 World War 2 would begin with the invasion of Poland by Nazi Germany on September 1, 1939. The Soviet Union invaded Poland from the East on September 17, 1939. The double invasion is dramatized in Andrzej Wajda's 2007 film Katyn. This important date in history and cautionary tale for democrats remains largely ignored.


However the Victims of Communism through their blog Dissident speaks truth to power calling on people of good will not only to remember the crimes of the Nazi regime but to take on a new task that remains to be done:


Unlike in the case of the Nazis, however, there has yet to be a comprehensive reckoning of all of the past Soviet crimes. Moreover, in Putin’s Russia we see concerted efforts to reclaim Soviet glory and to justify Soviet repression and mass murder. Now more than ever it is imperative the world recognize the fundamentally and necessarily evil character of socialist systems. Just as we would rightly reject the contention that national socialism was simply improperly implemented, so too we should reject the same assertion in the case of international socialism. No experiment in government has been run more often in more places at different times and under different conditions while leading every time to the same results—death, depravity, degeneration, and degradation of the human soul and the natural environment alike.

It is important to recall that the worse war in human history with a loss of life not seen before or since was planned for in a diplomatic agreement with secret protocols between the regime of the National Socialist German Workers' Party and the  regime of the Communist Party of the Soviet Union. Furthermore that although Nazi Germany was brought to an end in 1945 the brutality of Communist Russia continued through 1991 and today a former KGB intelligence officer rules in Russia.

The Czech writer Milan Kundera observed that "the struggle of man against power is the struggle of memory against forgetting." This observation is especially relevant on this day and the efforts to erase this dark chapter of history must be resisted. 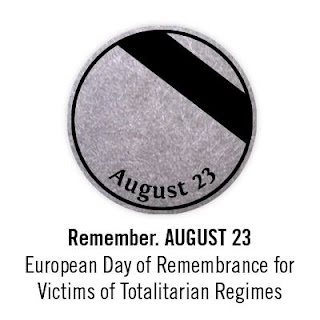