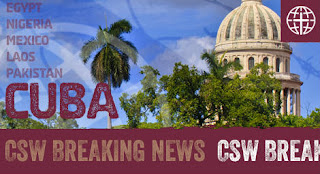 On August 16, 2016 Christian Solidarity Worldwide (CSW) reported that the pace of church demolitions in Cuba was increasing. According to CSW in their latest report on freedom of belief or religion there were 1,606 separate violations between January and July 2016.  This worsening situation compound the explosive growth of repression last year. In 2015 there was a tenfold increase in religious repression compared to 2014 with 2,300 separate violations recorded in 2015 compared to 220 in 2014.

Carey Lodge, a journalist for Christian Today reported on March 21, 2016 that a day earlier:


"Rev Mario Felix Lleonart Barroso's home and church were surrounded by police and state security agents early in the morning on March 20, he told Christian Solidarity Worldwide (CSW) ahead of his arrest.  The pastor was then arrested and taken away by officials, while his wife, Yoaxis Marcheco Suarez, was placed under house arrest. She and the couple's two young daughters have been locked inside their home, in Taguayabon, Villa Clara Province, and their phone connection has been cut.

Before being cut off, Marcheco Suarez was able to speak to CSW over the phone. Though the family and church have not been allowed to speak to Barroso directly, she said she'd been told that her husband had been taken to the city of Santa Clara, and was being refused food or drink.

She added that the pastor had already been ill over the weekend, after a stranger pricked him with a pin while he was on public transport last week."

The March 20th arrest just hours before the start of President Obama's official visit to Cuba speaks volumes of the nature of the so-called normalized relations between the Obama administration and the Castro regime as does the exponential increase in religious repression since the December 17, 2014 announcement that relations would be normalized.