"I am an enemy of the United States government." - Oscar López Rivera to federal judge Thomas McMillen (1983)
Yesterday President Barack Obama granted clemency to Oscar López Rivera, a founder of the Armed Forces of National Liberation Fuerzas Armadas de Liberación Nacional (FALN), who has been portrayed by leftists as a political prisoner while downplaying his violent past, but the facts demonstrate otherwise. The New York Daily News on January 17, 2017 offered the following summary:


FALN placed more than 130 bombs in American cities — including one in New York on Jan. 24, 1975. The explosive went off in busy Fraunces Tavern during lunch hour. Four people died, including Frank Connor, a 33-year-old father. “I faced Lopez six years ago at his parole hearing ... If he had expressed any atonement, any sympathy or empathy ... we’d have recommended he be released. But he didn’t,” said Joe Connor, who was a 9-year-old when his father was killed. López got 10 years tacked onto his sentence when he and a fellow FALN member were caught plotting a prison break that included killing their guards.

According to the Federal Bureau of Investigation's Counterterrorism Division: "Terrorism is defined in the Code of Federal Regulations as “the unlawful use of force and violence against persons or property to intimidate or coerce a government, the civilian population, or any segment thereof, in furtherance of political or social objectives” By this definition Mr. López Rivera is a terrorist.

The New York Daily News on January 16, 2017 described another bombing attack that claimed a young life, injured six and caused the evacuation of a 100,000 workers from Manhattan offices:

On Aug. 3, 1977, the FALN struck again in a coordinated attack in Midtown. An alert office worker at 342 Madison Ave., near 43rd St., noticed a suspicious package and evacuated the building. No one was hurt in the subsequent blast.Workers at the Mobil Building at 150 East 42nd St. weren't so lucky. An FALN bomb planted there killed 26-year-old Charles Steinberg. The building's ground-floor windows blew out and several New Yorkers were critically injured by a shower of glass. It was a bloody and chaotic mid-morning scene in the heart of the city. An NYPD cop described the sidewalk in front of the Mobil Building to a Daily News reporter as a "human mess." The FALN called in a dozen other bomb threats, forcing evacuations around the city. Mayor Abe Beame called the day's violent chaos an "outrageous act of terrorism." When López Rivera was arrested in 1981, the FBI found six pounds of dynamite and four blasting caps in his Chicago apartment along with numerous fake IDs.

In 1999 by the Committee on Government Reform conducted an investigation into President Clinton’s decision to offer clemency to sixteen FALN and Macheteros terrorists and offered the following report on Oscar Lopez-Rivera who while in prison planned a bloody escape that would have caused further loss of life:

An individual so "non-violent" that he wouldn’t renounce violence to get out of prison. In addition to crimes committed in furtherance of FALN goals, he plotted two escapes from federal prison. One was from Leavenworth Penitentiary and, according to a Victim Impact Statement, he "planned to blow up Fort Leavenworth with the most powerful plastic explosives known to the military, riddle guard towers with rounds from automatic weapons, and throw grenades in the path of those who pursued them. To achieve their goals, Lopez and Brown considered killing the inmates who threatened Richard Cobb, killing George Lebosky after they became suspicious of him, and killing firearms dealer Michael Neece to gain his weapons."

There is a moral chasm between an individual advocating the violent overthrow of a government and using the force of arms to lash out against civilians in order to generate fear to effect change and individuals exercising their fundamental human rights to achieve nonviolent change.


Both are political prisoners but the first is a also a terrorist  while the second is the antithesis of a terrorist and a prisoner of conscience.  The terrorist uses terror to dominate by fear, murdering innocent civilians, while the person of conscience seeks to empower others by their example, ideas and arguments in a celebration of life. 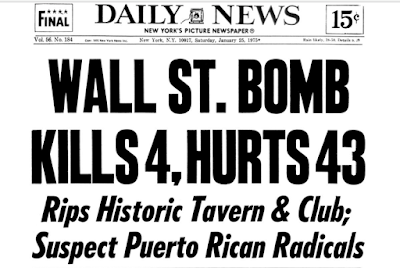 The Castro regime has been linked to the FALN terrorist organization by a Cuban defector that alleges the group had received funding from Havana.  An initiative held in Havana, Cuba in 1966 called the Tricontinental Conference where Fidel Castro insisted that "conditions exist for an armed revolutionary struggle" aimed, according to Georges Fauriol in :the international dimension, was to promote violent revolution in Africa and Asia as well as


“At this conference, and Latin American Marxist Leninist terrorist groups began their collaboration with the Palestine Liberation Organization (PLO), and other radical Arab groups in the training and arming of terrorists."

The Cuban dictatorship set about promoting terrorism as a legitimate tactic of revolutionary violence and published manuals on how to be more effective terrorists that still circulate today. In 1970 the Havana published the "Mini Manual for Revolutionaries" in the official Latin American Solidarity Organization (LASO) publication Tricontinental, written by Brazilian urban terrorist Carlos Marighella, which gives precise instructions in terror tactics, kidnappings, etc. and was translated into numerous languages  and distributed worldwide by the Cuban dictatorship. There is a chapter on terrorism:


"Terrorism is an action, usually involving the placement of an explosive or fire bomb of great destructive power, which is capable of effecting irreparable loss against the enemy. Terrorism requires that the urban guerrilla should have adequate theoretical and practical knowledge of how to make explosives. The terrorist act, apart from the apparent ease with which it can be carried out, is no different from other guerrilla acts and actions whose success depends on planning and determination. It is an action which the urban guerrilla must execute with the greatest calmness and determination." ... "Terrorism is a weapon the revolutionary can never relinquish."

It should not be a surprise to anyone that President Obama would commute the sentence of an unrepentant terrorist because he has done it before. On December 15, 2014 he commuted the sentences of three of Castro's secret police who had planned terrorist attacks on U.S. soil and had been sentenced to life in prison. One of them, Gerardo Hernandez was sentenced to a double life sentence for his role in a murder conspiracy that cost the lives of three U.S. citizens and one resident on  February 24, 1996 in  the Brothers to the Rescue shootdown. Worse yet President Obama tried to downplay the crime as a "tragic circumstance" four days later on December 18, 2014.

Despite the Castro dictatorship's celebration of American terrorists who have attacked the U.S. Capitol and ample reason to keep Cuba on the list of state terror sponsors the regime was removed from it on May 29, 2015 by the Obama State Department.

Edmund Mahoney of the Hartford Courant interviewed a son who lost his father in New York City on January 24, 1975 in a bombing by the FALN, a terrorist organization with links to the Castro regime:


“In the midst of our global war on terrorism, simply put, how can Obama and this administration remove a state that sponsors terrorists from the State Sponsor of Terror list?” said Joseph Connor, whose father died in a 1975 bomb attack at Fraunces Tavern in New York by a Puerto Rican nationalist group supported by Cuba. “This action shows Obama’s utter disregard for Americans like my father, who was murdered by Castro’s clients and it tells the world we condone terrorism.”

This is a shameful legacy not only for President Obama but for all those blinded by their political agendas and ideological prejudices into campaigning for the release of an unrepentant terrorist.


Never forget this was  a typical FALN operation of which Oscar López Rivera is a member: