The Cuban resistance to communism

"They can either kill us, put us in jail or release them. We will never stop marching no matter what happens." - Laura Inés Pollán Toledo, Havana, Cuba 2010

“Already many Cubans have discovered and soon all of them will discover that this oppression, that this imposed lie, can be overcome recognizing ourselves as brothers to conquer our rights peacefully. So there is hope.” - Oswaldo Payá Sardiñas,  Somos Liberación Havana, Cuba, July  2012. 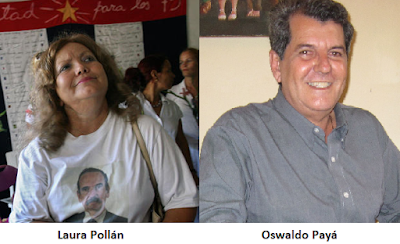 Castro lied his way into power because he knew that Cubans rejected and despised communism and that showing his Marxist Leninist colors would lead him nowhere. He came to power publicly claiming to be a democratic humanist who respected human rights and freedom of expression but privately sent his agents to warn newspaper editors that if they spoke critically of him or the revolution they would be killed. While talking democracy the firing squads were filmed and broadcast and the terror began.

Those who had fought by his side in good faith believing it was a struggle to restore democracy became uneasy with the course of the revolution. Some, like Huber Matos, who spoke out spent decades in prison. Many returned to the hills of the Escambray to carry on the struggle for the democratic restoration. This violent resistance was finally crushed in 1966.

In 1976 within the prisons a new and nonviolent movement emerged with the founding of the Cuban Committee for Human Rights. This movement would emerge with an international projection that also reached millions of Cubans in the 1980s with the founding of Radio Marti. Different groups began to emerge.

In 1988 the Christian Liberation Movement was founded in Havana in the neighborhood of El Cerro by Catholic laymen. Oswaldo Payá Sardiñas was the first leader of this movement that in 2002 would express the desire of millions of Cubans to be free with a petition drive called the Varela Project. Over 25,000 Cubans would sign the petition and have their signatures confirmed and turned into the rubber stamp National Assembly of Peoples Power, but the response of the Castro regime was to declare the constitution unchangeable and in March of 2003 to round up many of the organizers of the petition drive, along with other human rights activists and independent journalists in a crackdown that became known as the Black Cuban Spring.

In the midst of this wave of repression a new movement arose. The wives, sisters, daughters and mothers of these activists formed the Ladies in White. Laura Inés Pollán Toledo, a former school teacher, was the first leader of this movement. Sunday after Sunday braving violent repression from the agents of the Castro regime these women marched with white gladiolas in their hands demanding the freedom of their loved ones.

Both Oswaldo Payá and Laura Pollán died under suspicious circumstances during the normalization drive of the Obama Administration with the Castro regime. Laura Pollán died of purposeful medical neglect while under the custody of state security on October 14, 2011. Oswaldo Payá and Harold Cepero, youth leader of the Christian Liberation Movement, were killed in an "accident" staged by state security on July 22, 2012.

The Castro regime's brutality continues today. Sirley Ávila León was a delegate to the Municipal Assembly of People’s Power in Cuba from June 2005, for the rural area of Limones until 2012 when the regime gerrymandered her district out of existence. The Castro regime removed her from her position because she had fought to reopen a school in her district, but been ignored by official channels and had reached out to international media. Her son, Yoerlis Peña Ávila, who had an 18 year distinguished career in the Cuban military was forced out when he refused to declare his mother insane and have her committed to a psychiatric facility.


Sirley joined the ranks of the democratic opposition and repression against her increased dramatically. On May 24, 2015 she was the victim of a brutal machete attack carried out by Osmany Carriòn, with the complicit assistance of his wife, that led to the loss of her left hand, right upper arm nearly severed, and knees slashed into leaving her crippled. Following the attack she did not receive adequate medical care and was told quietly by medical doctors in Cuba that if she wanted to get better that she would need to leave the country.

The nonviolent resistance to the Castro regime continues today in Cuba and the struggle for freedom continues.

Third part of October 26, 2017 lecture sponsored by the Young Conservatives of Texas held in the Escondido Theater of the Student Union Building at Texas Tech University. The talk was entitled 'How Communism Arrived in Cuba.