Cost of holding up a poster in Cuba: 100 days in prison and counting

100 days and counting for carrying a poster calling for Denis Solis's freedom, and an end to dictatorship. 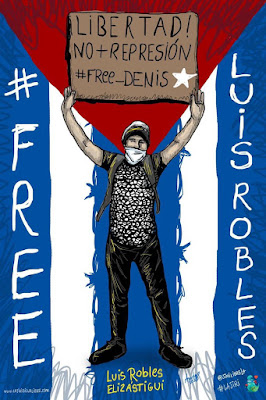 Earlier today the Acting Assistant Secretary for U.S. Department of State's Bureau of Western Hemisphere Affairs Julie Chung tweeted that it has been a hundred days since a young Cuban was jailed for holding up a poster in central Havana.

Today marks 100 days since Luis Robles Eliazastegui was imprisoned for simply holding a sign. He was protesting musician Denis Solis' unjust imprisonment in Cuba. Freedom of expression is a human right.

No one should be jailed for holding a sign.

One hundred days in prison and counting since Luis Robles Elizastigui walked along the San Rafael Boulevard in central Havana on December 4, 2020 with a piece of cardboard converted into a poster calling for the freedom of Denis Solis, an end to repression, and freedom. Videos were taken by passersby and uploaded to the internet.

He was arrested without resistance by the police, and charged "with 'acts against state security.' According to Diario de Cuba the charge was filed by First-Lieutenant Roberto Batista, who issued an order for 'temporary detention.'" 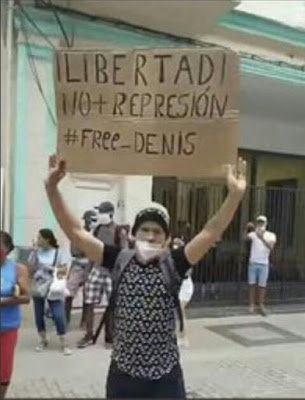 14ymedio identified the "young man as 28-year-old Luis Robles Elizastigui, originally from Guantanamo, who is the father of one son. Bystanders rushed to his defense when police tried to arrest him for holding up a cardboard sign that read, “Freedom, no more repression.” The sign also included the hashtag '#FreeDenis,' a reference to the rapper Denis Solis, who was sentenced to eight months in jail for alleged contempt."

A Habeus Corpus motion filed on December 14, 2020 was rejected by Popular Provincial Tribunal of Havana and he remained held at the headquarters of the secret police in Villa Marista. He was transferred to the maximum security prison of Combinado del Este in Havana. Activists reported that a prison official has instructed other prisoners to repeatedly physically assault him, and expressed their concerns for his safety.

The Castro regime declared war against human rights in 1959, and freedom of expression was one of its first victims, and continues to the present day. It got worse in 1996 with Law 88, also known as the gag law, when restrictions on freedom of expression and association were expanded increasing prison sentences to 20-years.

There are currently 180 identified political prisoners in Cuba. According to a January 13, 2020 article in The New York Times a former high-ranking judge in Cuba provided documents showing that there are nearly 4,000 Cubans every year accused of being “antisocial” or “dangerous,” terms the Castro regime uses to jail people who pose a risk to the status quo, without having committed a crime." Furthermore, the article says that "records show that Cuba’s prison system holds more than 90,000 prisoners. The Cuban government only publicly released the figure once, in 2012, when it claimed that 57,000 people were jailed."

EuropaPress, reported on January 13, 2020 that Cuba today has the largest per capita prison population in the world according to the ranking method of the Institute for Crime and Justice Policy Research.

Before getting lost in the statistics it is important to remember that among the thousands jailed for challenging the status quo are Luis Robles Elizastigui and Denis Solís Gonzalez. They are jailed for simple defending human rights, and there are many others like them behind bars in Cuba.