International Women's Day 2021: Reflection on women leaders around the world

"We still think of a powerful man as a born leader and a powerful woman as an anomaly". - Margaret Atwood, author of The Handmaid's Tale

In 2020 focused on the problematic origins of International Women's Day, but today reflect on women who have achieved power around the world by both democratic and other means.

Capitalist Democracies have seen the rise of women leaders around the world: Golda Meir in Israel, Margaret Thatcher in the United Kingdom, Indira Gandhi in India, Angela Merkel in Germany, Vigdís Finnbogadóttir in Iceland, Ellen Johnson Sirleaf in Liberia, Kim Campbell in Canada, Michelle Bachelet in Chile, Erna Solberg in Norway, Simonetta Sommaruga in Switzerland, and the list goes on for a while.

Women leaders in communist regimes are few and far between, such as Jiang Qing in China, Elena Ceaușescu in Romania, and Vilma Espín in Cuba became high profile figures because of their respective husbands, and owed whatever power they had to these male leaders. Independent women with popular support and their own power base did not fare well in these regimes.

In the Cuban case strong women, not related or backing the Castro brothers, were subjected to violent repression and exile or death. 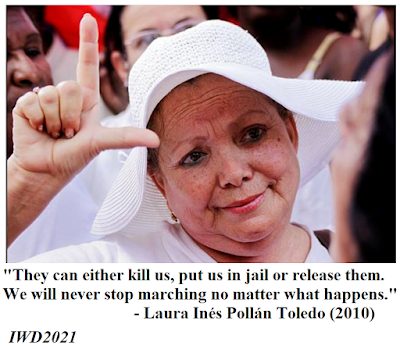 Laura Inés Pollán Toledo, a courageous woman spoke truth to power and protested in the streets of Cuba demanding an amnesty for Cuban political prisoners. She had been a school teacher, before her husband was jailed for his independent journalism in 2003 along with more than 75 other civil society members. Laura was greatly admired both inside and outside of the island for founding the Ladies in White movement after the Black Cuban Spring of 2003. She, and the group of women she led, nonviolently challenged the Castro regime in the streets of Havana initially, and eventually across the island.

Laura reached out to the wives, mothers, sisters, and daughters of the 75 prisoners of conscience jailed in March of 2003 along with her husband and they carried out a sustained nonviolent campaign that after nine years obtained the freedom of their loved ones. Since she did not disband the Ladies in White when her husband returned home. Laura recognized that the laws had not changed, that prisoners of conscience remained behind bars and that she would continue her human rights activism. This is why the Castro regime did away with her on October 14, 2011.

Lady in White Daisy Cuello Basulto denounced that her 21 year old daughter was arrested, violently stripped and forced to urinate in front of police officers in a police station in Cotorro. The 21 year old was arrested along with her mom and other family on September 27, 2015 while on their way to attend the Sunday march of the Ladies in White. In the police station "she was humiliated," although she refused to urinate in front of the agents, who constantly jeered at her, explained her mother in an interview with Radio República. The young woman was locked in a cell with a strong smell of hydrochloric acid and now suffers from a sore throat. "She has a fever and feels very bad," reported her mother.

This has gone on for decades.

Twenty years earlier on On November 19, 1991 Cuban poet Mariela Elena Cruz Varela, who peacefully dissented asking for nonviolent change, was assaulted by a mob organized by the dictatorship who tried to force feed the poet her own words. She wrote about the assault in her book, Dios en las cárceles cubanas (God in the Cuban jails):


"They broke my mouth trying to make me swallow the leaflets that members of my group had distributed throughout Havana. Afterwards I spent three days brutally besieged, imprisoned in my own home with my two children, with no water, no electricity, no food, no cigarettes. We heard what the huge speakers never stopped amplifying, allegorical songs to the country, the necessary punishment of traitors, and anyone who wanted to could shout at me, organized, of course, the slogans they pleased: Comrade worm, we are going to execute you by firing squad!"

And the violence continues today against women in Cuba, who demonstrate leadership. Cuban dissident Sirley Ávila León, age 56, was gravely wounded in a machete attack on May 24, 2015 by Osmany Carrión who had been "sent by state security thugs" and that she is sure that the aggression "was politically motivated."

The attack was severe enough that she suffered deep cuts to her neck and knees, lost her left hand and nearly lost her right arm. Sirley had been a local official who had sought the reopening of a school for Cuban children, and drew the ire of the dictatorship with her persistent demands.

Laura, Maria Elena, and Sirley were leaders that in a democratic Cuba would have had leadership positions in government, and at least one could have become president, but Cuba is a communist, male dominated dictatorship.

47 Chinese activists were arrested in January 2021 and now face life sentences for organizing an unofficial primary to choose opposition candidates for the now-postponed 2020 Legislative Council election. It attracted approximately 600,000 voters. One of the youngest defendants is a  23-year-old young woman, Wong Ji-yuet, she is a first time political hopeful. The pro-democratic primary nominee won 22,911 votes, and came in third in the NTW Constituency in Hong Kong. She is a political leader.

In the Orwellian world that is the Peoples Republic of China in the 21st century, exercising democratic rights under the National Security Law imposed last year on Hong Kong is grounds for a maximum sentence of life in prison.

What of women communist leaders? They appear to achieve power through their husbands, and their fortunes rise and fall with their spouse. They also have a poor track record on women's liberation. Considering that Elena Ceausescu is considered one such "leader" as the First Vice Chairwoman of the Council of Ministers. Her husband, Nicolae Ceausescu, presided over policies that were not pro-women.

Shannon Quinn authored the essay "17 Moments In History that Inspired the Handmaid’s Tale" in History Collection and provides a summary of Ceauşescu's Decree 770 policy for women.


One of the specific events that Margaret Atwood found during her research process was “Decree 770” in Romania. This was a law that passed in 1967 that made abortions and all forms of contraception illegal. This had nothing to do with religious beliefs. It was an action that the government believed was necessary for the future of their country. The government already taxed married couples a 6% income tax if they did not have children between the ages of 25 and 50, but they realized that this was not enough to stop people from using contraception.

During the 1950’s, Romanian women were entering the workforce and having fewer children. By the 1960’s, abortion became a common practice, because there were very few birth control options available to women to prevent pregnancy. This began a sharp dip in the country’s birth rate. The Communist Party wanted the population to increase from 23 million to 30 million in a single year, so they enacted Decree 770. After the change of law in 1967, and women no longer had access to birth control, the number of babies born that year skyrocketed to roughly double what they had been the year before. Thousands of new preschools and nursery schools had to be built. Orphanages were overflowing with children whose parents could not afford them.  Aside from making abortions illegal and taking contraception off of store shelves, women’s bodies were literally policed. Decree 770 forced women to visit the gynecologist once a month to check for pregnancy, and police officers stood in the halls to make sure women complied. If a woman was pregnant, the doctors followed her progress very closely. Wealthy women were able to buy birth control pills and condoms on the black market, but poor women did not have that option. There were some cases where women caught the pregnancy before the doctors did, and some women died while attempting to give themselves an at-home abortion. The policy continued until the fall of the Soviet Union in the 1980’s.

Hundreds of thousands of children were subjected to this in Romania, and millions of women were forced to have children.

International Women's Day should be a day to celebrate democracy and markets as instruments for the empowerment of women, and observe closely the dystopian record for women under communist regimes, and resolve to resist the system that inspired Margaret Atwood's The Handmaid's Tale.