Remembering the 2003 Black Cuban Spring, the failure of the UN Human Rights Council, and the terror in Cuba today

Remembering the 2003 Black Cuban Spring, the long winter, and the new Black Spring

Nineteen years ago on March 18, 2003 a crackdown began in Cuba on the eve of the United States going to war in Iraq. Scores of nonviolent Cuban dissidents were rounded up and subjected to political show trials. 75 were condemned to lengthy prison terms of up to 28 years in prison. This became known as the Black Cuban Spring.

This past year the Castro regime carried out a crackdown not seen since 2003, and that may exceed it. On March 16, 2022 the draconian sentences were justified in an official communication that marked a new Black Spring for hundreds of imprisoned Cubans and their families. Many of the jailed are young Cubans.

The Cuban dictatorship released a statement on March 16, 2022 that "it had sentenced upwards of 100 protesters in Havana to between 4 and 30 years in prison for violence committed during island-wide demonstrations last year, the largest since Fidel Castro's 1959 revolution," reported Reuters and other news outlets.

Regime officials failed to mention that it was they who had initiated and carried out the deadly violence that day, not anti-government demonstrators who were non-violent. On July 12, 2021, during the 11J protests, Diubis Laurencio Tejeda, age 36, was shot in the back by regime officials on day two of nationwide protests in Cuba. He was not the only one shot by them.

Worse yet, the longest sentences handed out were for video recording the protests. Cubans that recorded or live streamed the protests were accused of sedition. Here are four high profile cases.

France24 reported on the plight of Dayron Martín Rodríguez (age 36) who was sentenced to 30 years in prison. He was "detained in La Güinera. He was out "to buy food for his pigeons when he ran into the rally," said his mother, Esmeralda Rodríguez (age 63), who added that "he started recording to send his father the video." He felt the stones hitting him, he fell and lost his phone. Video emerged during the 11J protests of police throwing rocks and firing on unarmed protesters. Esmeralda Rodríguez, "suffered a pre-infarction when she found out in Ecuador, where she emigrated. eight years ago" that her son had been sentenced to 30 years in prison. 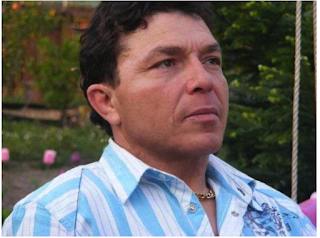 German tourist and dual citizen, Luis Frómeta Compte, was sentenced to 25 years in prison on December 23, 2021 for spontaneously filming a demonstration in Havana for private purposes with his smartphone while visiting relatives and was subsequently arrested. According to the Frankfurt arm of the International Society for Human Rights (ISHR), "the Dresden family man is one of about two thousand demonstrators arrested on July 11 during protests against the dictatorship." ISHR strongly criticized the long prison sentence and pointed out that, in the meantime, the 59-year-old’s brother-in-law is also in pre-trial detention.

Agence France Presse reported on the plight of a father and daughter punished for filming the protests.  Fredy Beirut (age 64) and Katia Beirut (age 36) who filmed the July 2022 protests were each sentenced to 20 years in prison. The father will emerge from prison at 84 years of age, and the daughter will be 56 years old.

Filming, and bearing witness can end your life as a free person in Cuba. 19 years ago it was organizing a petition drive, or being an independent journalist or human rights activist that could cost you a 28 year prison sentence.

The majority of the activists imprisoned in 2003 had participated in the Varela Project, a petition drive that called for a referendum under the terms of the Cuban Constitution on whether there should be more freedom of expression, an amnesty for political prisoners and a chance for ordinary citizens to own small businesses. 11,020 signatures had been turned in 10 months earlier on May 10, 2002.
The regime responded with its own mandatory petition drive to make the Cuban Constitution unchangeable.
The Economist in its December 14, 2005 issue published a conversation with Oswaldo Payá Sardiñas titled "An unsilenced voice for change" that outlined what had taken place:

It took over eight years, but the last of the group of the 75 were eventually released. This was in large part due to the Ladies in White and international solidarity campaigns carried out by NGOs, but the international community failed to call out Havana's impunity.

Castro expected the March 2003 crackdown, dubbed the “Black Cuban Spring,” to be the end of the opposition. Instead, it sparked the emergence of a new movement, the Ladies in White, led by the wives, mothers, sisters and daughters of the men jailed. For eight years, these women lobbied, protested and marched for their loved ones’ freedom. They were successful, and the last of the men were released from prison in 2011, a nonviolent victory over the dictatorship. The Ladies in White continue to the present day, demanding human rights be respected in Cuba.

On April 2, 2003 three young black men were arrested, tried and executed by firing squad nine days later on April 11, 2003 for trying to flee the island in a hijacked ferry, in which no one had been physically harmed. This drew worldwide condemnation at the time, and became known as Cuba's Black Spring, but it did not prevent the end of the mandate for monitoring human rights violations in Cuba in a backroom deal for the establishment of the UN Human Rights Council on March 15, 2006.

Oswaldo was murdered along with the Christian Liberation Movement's youth leader Harold Cepero on July 22, 2012. His successor Eduardo Cardet was a prisoner of conscience from November 30, 2016 through September 3, 2019. He was jailed for giving a frank assessment of Fidel Castro's legacy following his death on November 25, 2016.

Sixteen years ago the United Nations Human Rights Council was founded on a small moral compromise that sacrificed human rights oversight in Belarus and Cuba in what U.N. officials called the dawn of a new era. Special rapporteurs with mandates to specifically monitor the human rights situation in those two countries were formally gotten rid of in 2007 and a code of conduct established that undermined the independence of all special rapporteurs.

Ending oversight of Belarus and Cuba not only left the victims of these dictatorships exposed to more repression, with impunity by their oppressors, but emboldened these dictatorships not only to worsen their practices at home but to undermine human rights abroad. Worse yet, both would be elected to serve on the UN Human Rights Council with other outlaw regimes.

Throughout this entire period, despite repeated requests, the Castro regime has not allowed the International Committee of the Red Cross to visit prisons in Cuba.

This failure of accountability led to greater levels of violence and repression by the Cuban dictatorship that continues to sit on the UN Human Rights Council. The regime in Havana is an outlaw regime, and cannot be trusted.
This can be seen in their legal system and how it treats poor Cubans.

Havana Times reported on La Guinera, a Havana neighborhood, "where 96 of the 790 people in Cuba for taking part in the protests on July 11th and 12th, that is to say, 12 out of every 100 people arrested for protesting are La Guinera locals." Regime claims do not hold up when their own documents are examined, demonstrates Havana Times citing official documents.

"The Public Prosecutor’s Office says that sedition charges against La Guinera residents are due to the 'level of violence in vandalic acts that in a riot-like situation led to injuries and put the lives of civilians, public officials and law enforcement officers at risk, by attacking them with sharp, blunt and incendiary objects, seriously disturbing public order with the deliberate purpose of subverting rule of law.' However, these same records state that in La Guinera police patrol cars weren’t attacked —unlike other parts of the country—, and the highly-criticized dollar stores weren’t vandalized, there was no looting or serious damage to property. Furthermore, those charged with sedition include people who were only recording and live streaming events on Facebook, without taking part in any conflict with the police, as well as detainees who the Public Prosecutor’s Office is charging with sedition for the simple fact they were present in the crowd that prevented public order."

The pattern repeats itself, the longest prison sentences are meted out to those accused of sedition for "recording and live streaming events on Facebook, without taking part in any conflict with the police" or "for the simple fact they were present in the crowd." Press bureaus in Havana, perhaps in order not to be expelled, failed to report that deadly violence came not from the protesters, but from regime agents, and counter protesters that they head armed with clubs and bussed in to violently shut down what had been peaceful protests. Havana Times offers the following in evidence that conflicts with the official version.

The Public Prosecutor’s Office also justifies sedition charges by saying detainees attacked and injured police officers and counter-protestors without reason, but this statement also falters. Stones and objects were thrown during the protests, but the Public Prosecutor’s Office was unable to find police officers and counter-protestors who sustained severe injuries. The records state that only three counter-protestors were injured and none of them required medical attention. In the case of police officers, 14 were injured, and only one needed medical attention. On the contrary, during the police’s response —involving the use of firearms—, Diubis Laurencio lost his life, the only fatality recognized by the Government, and many protestors were hit by bullets, including minors. “I was told my wife went to look for my stepson at the protest. She didn’t find him, and she soon found out that he had been hit by a bullet in his knee, just before they killed the other young man,” Janoi Ceballos wrote in a text message, the step-father of 16-year-old Cuban teenager Misael Yoel Fuentes Garcia, who was injured in La Guinera.

Dictatorship's need to be held accountable, at least ostracized, and removed from international human rights bodies. Western democracies, such as the Spanish government, should not be selling weapons to the Cuban dictatorship to use them against the Cuban people.

These failings on the international stage have real world consequences as we are seeing today in Ukraine.

This is why we are circulating a petition to leaders in the Western democracies and the international community to finally hold the dictatorship in Havana accountable.