Dugin's call to arm US adversaries is at least five years too late: Russian troops have been in Latin America for years, and armed Cuba, Nicaragua and Venezuela

“The American Empire should be destroyed. And at one point, it will be.” - Aleksandr Dugin, The Fourth Political Theory

Aleksandr Gelyevich Dugin, known as Putin's philosopher, who has Vladimir Putin's ear, has called for Russia to arm U.S. adversaries in Latin America like Cuba, Venezuela, and Nicaragua. He is at least five years too late.

Russia not only armed these three countries, but has had a military presence in Cuba, Nicaragua, and Venezuela for years.

In 2013, Secretary of State John Kerry declared the end of the Monroe Doctrine era. The US would no longer counter intrusions from outside powers into the Americas.

The reality is that it had been a dead letter since 1961.

Maduro's regime invited Russian mercenaries to protect him in Venezuela. Reports in 2019 indicated that there are already 2,000 Russian nationals working in intelligence roles and reporting to the Ministry of Defense, and their numbers are increasing.

During the Cold War, Paulina Zelitsky, a Soviet born Canadian Engineer, was a member of a design and construction team for a Soviet submarine base installation in Jagua Bay, Cienfuegos, Cuba. In 2020, she said, the Russians were rebuilding their nuclear submarine base in Cuba.

The United States has remained publicly indifferent to the Russian military buildup in Latin America.

In the case of Ukraine, when the Soviet Union imploded in 1991, and Kyiv became independent with its own nuclear stockpile. Moscow tried to negotiate with Kyiv for them to give up their nuclear weapons, but could not reach an agreement. The United States and the United Kingdom together with Russia guaranteed the territorial integrity of Ukraine, and Kyiv gave up their nuclear stockpile to Russia in the 1990s.

In stark contrast, Vladimir Putin is threatening nuclear war because NATO countries are helping Ukraine, a nation he invaded in an act of naked aggression in violation of international law, and pledges made by Moscow too Kyiv to respect its territorial integrity.

The invasion itself is considered a war crime, but the targeting of civilians rises to the level of crimes against humanity. 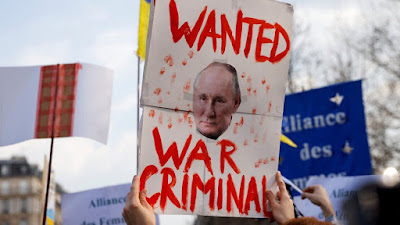 Putin's enablers are trying to equate the present Ukraine crisis with the 1962 Cuban Missile Crisis. The two are not comparable. The United States did not invade Cuba when the Russian set up a military presence there, or armed the Castro regime with conventional weapons.

It was only after the Soviet Union shipped in intercontinental ballistic missiles with hydrogen bombs that could reach the entire continental United States that the crisis began, and was ended when those offensive weapons were removed, but the Russians stayed, and so did their conventional weapons.

Dugin and Putin both seek the restoration of the Russian empire, and are willing to risk WWIII to achieve their imperial designs.  Russia in taking Ukraine would seize an additional 11.5% in world production of Wheat. The current war is also creating greater global food insecurity threatening multiple famines.

On September 21, 2019, at the Nexus Symposium in  Amsterdam French philosopher Bernard-Henri Lévy debated Russian philosopher and nationalist Aleksandr Dugin. Over the course of an hour one could hear first hand the case made for Russian imperialism by Dugin, and his critiques of Western democracy, the Enlightenment, and  Lévy's powerful rebuttal.