A few sentences that brought down a communist dictatorship

“Words, so innocent and powerless…when standing in a dictionary, how potent for good or evil they become in the hands of one who knows how to combine them.” - Nathaniel Hawthorne 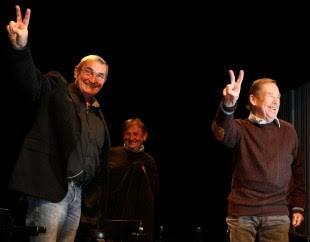 Jiří Křižan & Václav Havel in 2009
In the summer of 1989 Jiří Křižan and Václav Havel drafted "A Few Sentences" Petition calling for the release of political prisoners and respect for human rights. Tens of thousands of Czechoslovakians signed the petition and it contributed to the Velvet Revolution and the fall of communism in Czechoslovakia. Jiří Křižan died of a heart attack on October 13, 2010 in the eastern village of Branky in the Czech Republic. Below is an English translation of this historic petition. 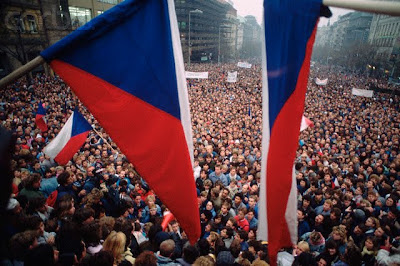 "A Few Sentences"
The first months of 1989 have once again clearly shown that even if the current Czechoslovak leadership very frequently incants the words "rebuilding" and "democratization," in reality they quite hopelessly resist all that creates democracy or at least distantly suggests it. Citizens' petitions and initiatives that the leadership did not organize themselves are refused as the events of pressure groups. They break up people's peaceful assemblies and do not allow the public to have a say in the preparation of new laws. The same months, however, have shown at the same time that the public is now liberating itself from its lethargy, and more and more people have the courage to express in public their desire for societal change. Motion in society is starting to ever more seriously clash with the motionlessness of power, societal tension is growing and the danger of an open crisis is starting to be a threat. None of us wishes for such a crisis. For this reason we call on the leadership of our country to understand that the time has come for real and thorough systemic change and that this change is in free and democratic discussion. The first step toward any kind of meaningful change starts with a new constitution and ends with economic reform, and must therefore be a change in the societal climate in our country, into which the spirit of freedom, trust, tolerance and plurality must return.

In our opinion, what is necessary is:

1. The immediate release of all political prisoners.

2. That freedom of assembly ceases to be limited.

3. That various independent initiatives cease to be criminalized and persecuted and begin to finally be understood by the government as being what they have long since been in the eyes of the public, which is as a natural part of public life and a legitimate expression of its diversity. At the same time, obstacles should not be placed on the creation of new civic movements, including independent labor unions, alliances and federations.

4. That the media and all cultural activity be relieved of all forms of political manipulation, as well as hidden censorship both before and after the fact, that it be open to a free exchange of ideas and that the media independent of official structures that have thus far been active be legalized.

5. That the justified demands of all religious citizens be respected.

6. That all planned and implemented projects which are to permanently change our country's environment and thus preordain the lives of future generations be immediately presented for general evaluation by experts and the public.

7. That free discussion begins not only about the 1950s, but also about the Prague Spring, the invasion by 5 states of the Warsaw Pact and the subsequent normalization. It is sad that certain countries whose armies once interfered in Czechoslovakia's development are now starting to dispassionately discuss this topic, while in Czechoslovakia it is still a major taboo, only so that those people from political and state leadership responsible for 20 years of decline in all areas of societal life will not have to step down.

Everyone who agrees with this standpoint can support it with their signature.

We call on the government to not treat it in the way they have been accustomed to treating uncomfortable opinions until now. It would strike a fatal blow to the hope with which we are led, and that is a hope for real societal dialogue as the only possible way out of the dead-end street Czechoslovakia is in today. 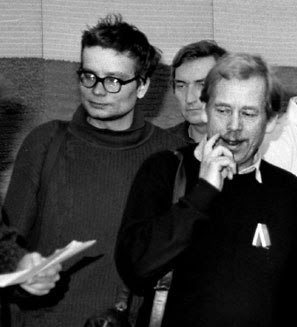