The Sakharov Prize: Who is it named after?

"I will never abandon the fight for human freedom. Peace depends on the freedom of each and every man." - Andrei Sakharov, 1986 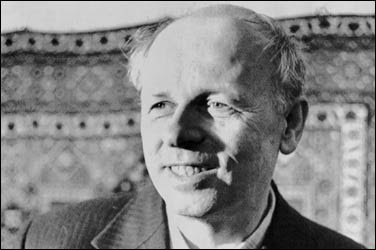 Guillermo Fariñas Hernández was awarded the Sakharov Prize by the European Parliament on October 21, 2010. Who was Andrei Dmitrievich Sakharov, the man the award is named after? A nuclear physicist, he was considered the father of the Soviet hydrogen bomb, and later a human rights activist who won the 1975 Nobel Peace Prize. In his Nobel Lecture on December 11, 1975 (read by his wife Elena Bonner, who also accepted the prize, - he was not allowed to leave the Soviet Union) Sakharov made the case for the linkage between peace, economic development and human rights. Let him tell you in his own words about this remarkable journey.:

Translation from the Russian text

I was born on 21 May 1921. My father was a well-known teacher of physics and the author of textbooks, exercise books and works of popular science. I grew up in a large communal apartment where most of the rooms were occupied by my family and relations and only a few by outsiders. The house was pervaded by a strong traditional family spirit - a vital enthusiasm for work and respect for professional competence. Within the family we provided one another with mutual support, just as we shared a love of literature and science.

My father played the piano remarkably well, in particular Chopin, Grieg, Beethoven and Scriabin. During the civil war he earned a living by playing the accompaniment to silent films at the cinema.

I am especially grateful for the memory of my grandmother, Maria Petrovna, who was the family's good spirit. She died before the war at the age of 79. My grandmother brought up six children and when she was around 50 years old she taught herself English all on her own. Right up to the time of her death she read English works of fiction in the original. From when we were quite small she read aloud to us, her grandchildren. I still have the most vivid memory of her reading to us those evenings. It would be Pushkin, Dickens, Marlowe or Beecher-Stowe, and in Holy Week, the Gospel.

The influence of my home has meant a great deal to me, particularly because I had my first lessons at home and later experienced the greatest difficulty in adapting myself to my classmates. I took my final school examination with distinction in 1938 and at once began to study at the Faculty of Physics in Moscow University. Here too I passed my Finals with distinction, in 1942 when because of the war, we had been evacuated to Ashkhabad.

In the summer and autumn of 1942 I lived for some weeks in Kovrov where I had originally been sent to work after my graduation. Later I worked as a lumberjack in a desolate rural settlement near Melekess. My first bitter impressions of the life of the workers and peasants in that very hard time are derived from those days. In September 1942 I was sent to a large munitions factory on the Volga where I worked as an engineer and inventor right until 1945. At the factory I made a number of inventions in the field of production control. But in 1944, while still employed at the factory, I wrote some scientific articles on theoretical physics and sent them to Moscow for appraisal and comment. These first works were never published, but they gave me the self-confidence so essential to every researcher.

In 1945 I began to read for my doctorate at the Lebedev Institute, the department of physics in the Academy of Sciences of the USSR. My teacher there was the great theoretical physicist, Igor Evgenyevich Tamm.

He influenced me enormously and later became a member of the Academy of Sciences of the USSR and a winner of the Nobel Prize for physics. In 1947 I defended my thesis on nuclear physics, and in 1948 I was included in a group of research scientists whose task was to develop nuclear weapons. The leader of this group was I.E. Tamm.

For the next 20 years I worked under conditions of the highest security and under great pressure, first in Moscow and subsequently in a special secret research centre. At the time we were all convinced that this work was of vital significance for the balance of power in the world and we were fascinated by the grandeur of the task. In the foreword to my book Sakharov Speaks, as well as in My Country and the World, I have already described the development of my socio-political views in the period 1953-68 and the dramatic events which contributed to or were the expression of this development. Between 1953 and 1962 much of what happened was connected with the development of nuclear weapons and with the preparations for and realization of the nuclear experiments. At the same time I was becoming ever more conscious of the moral problems inherent in this work. In and after 1964 when I began to concern myself with the biological issues, and particularly from 1967 onwards, the extent of the problems over which I felt uneasy increased to such a point that in 1968 I felt a compelling urge to make my views public.

Thus it was that the article Progress, Peaceful Coexistence and Intellectual Freedom came into being. In reality these are the same themes which seven and a half years later were to become the title of my Nobel Lecture ("Peace, Progress and Human Rights"). I consider these themes to be fundamentally important and closely interconnected. My public stand represented a turning point for me and my entire future. The article very quickly became known throughout the world. For a long time the Soviet press contained no mention of the Progress, and later references were either disapproving in the extreme or else ironic. A great many critics, even if sympathetically disposed towards me, regarded my reflections in this work as exceedingly naive and speculative. Today, however, after eight intervening years, it seems that much of what may be termed important both in Soviet politics and in international politics is connected in one way or another with these thoughts.

From 1970 onwards the defence of human rights and the defence of the victims of political trials became all-important to me. Together with (Valery) Chalidze and Tverdokhlebov, and later with (Igor) Shafarevich and Podyapolski I shared in running the Committee for Human Rights, thus making my position quite clear. I feel bound to recall the fate of two of them. In April 1976 Andrei Tverdokhlebov was sentenced to five years exile for his social work, and in March Grigori Podyapolski was lost to us through his tragic premature death.

As early as 1950, Tamm and I were the joint originators of a Soviet work on controlled thermonuclear reaction (the thermonuclear reaction of hydrogen isotopes either for the production of electrical energy or for the production of fuel for nuclear reactors). Great advances have now been made in this work. A year later, at my initiative, experiments were started on the construction of implosive magnetic generators (devices by which chemical or nuclear reactions are transformed into magnetic field energy). In 1964 we attained a record with a magnetic field of 25 million gauss.

From July 1968, when my article was published abroad, I was removed from top-secret work and "relieved" of my privileges in the Soviet "Nomenclatura" (the privileged class at the top of the system). Since the summer of 1969 I have again been working at the Lebedev Institute where I studied, as an assistant, for my doctorate from 1945 to 1947 and began my scientific work. My present work concerns the problems connected with the theory of elementary particles, the theory of gravitation and cosmology and I shall be glad if I can manage to make some contribution to these important branches of science.

Nevertheless, it is the social issues which unremittingly demand that I make a responsible personal effort and which also lay increasing claims on my physical and mental powers. For me, the moral difficulties lie in the continual pressure brought to bear on my friends and immediate family, pressure which is not directed against me personally but which at the same time is all around me. I have written about this on many occasions but, sad to report, all that I said before applies equally today. I am no professional politician - which is perhaps why I am continually obsessed by the question as to the purpose served by the work done by my friends and myself, as well as its final result. I tend to believe that only moral criteria, coupled with mental objectivity, can serve as a sort of compass in the cross-currents of these complex problems.

I have stated in writing many times already that I intend to refrain from making any concrete political prognoses. There is a large measure of tragedy in my life at present. The sentences lately passed on my close friends - Sergei Kovalev (who just exactly at the time of the Nobel Prize ceremony was sentenced to seven years' imprisonment and three years' exile) and Andrei Tverdokhlebov - represent the clearest and most unequivocal evidence of this. Yet, even so, both now and for always, I intend to hold fast to my belief in the hidden strength of the human spirit.

[The following is from the Nobel Committee]

After receiving the prize, Sakharov continued to work for human rights and to make statements to the West through Western correspondents in Moscow. Early in 1980, after he had denounced the Soviet invasion of Afghanistan, he was exiled to Gorky. In 1984, Elena Bonner joined him, also under sentence of exile. Isolated from family and friends, they continued to be persecuted by the KGB. Sakharov resorted to hunger strikes to secure medical treatment for Bonner, who was finally given permission to leave the Soviet Union for heart surgery in 1985. After Mikhail Gorbachev came to power with a policy of liberalisation, they were freed and allowed to return to Moscow in 1986. Despite the measure of freedom now possible, which enabled him to take up a political role as an elected member of the Congress of the People's Deputies, Sakharov was critical of Gorbachev, insisting that the reforms should go much further. He died in Moscow on December 14, 1989.
Posted by John Suarez at 8:07 PM